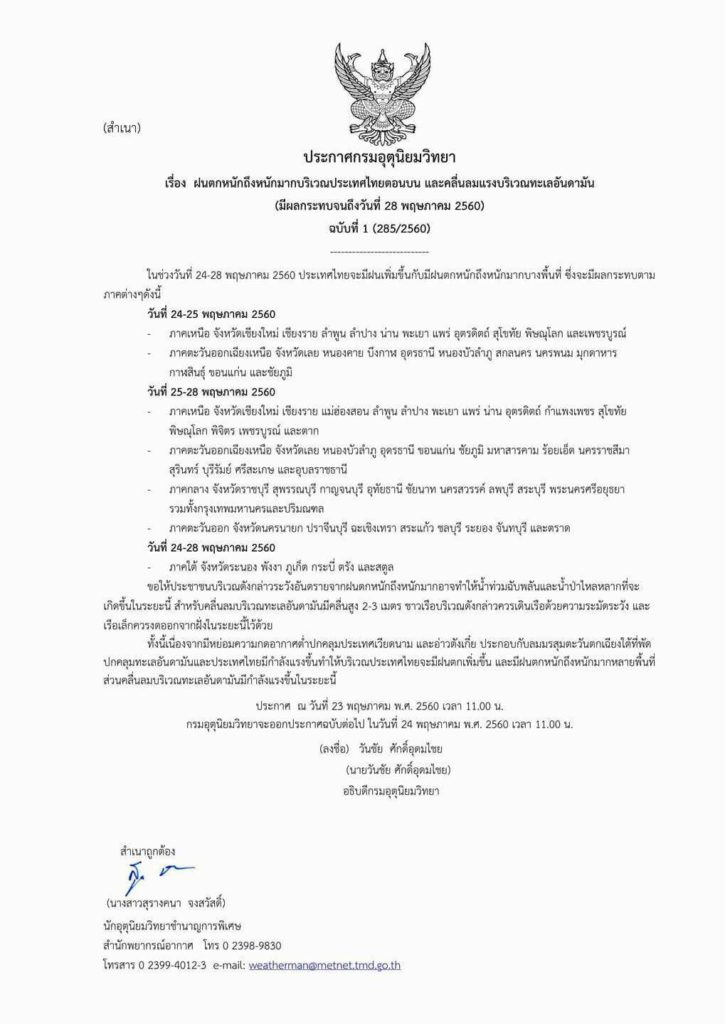 We are now just at the start of Rainy Season in Northern Thailand and a few days before our trip there was an official weather warning about storms and possible flooding in Northern Regions. Not something to be taken lightly, for this time last year friends of mine were in Pai when a flash flood broke the banks of the Pai river, flooding a large section of downtown Pai, carrying with it a number of resort huts and vehicles.

We thought for a moment about whether or not we should ride up, but didn’t take long to agree “..why the hell not! Let’s do it anyway!”
So, come Saturday morning with rain looming, we planned to meet regardless, at the PTT garage just after the Pai turnoff.

Waking early I headed off to the garage, having had only around four hours sleep. I often have a problem with sleeping before a ride trip. A combination of too much excitement and my mind ticking over if I remembered to pre-pack the important stuff. I also often worry about sleeping through my alarm, although I am usually always awake before it goes off anyway. I figured I may as well head off and sit in the garage Amazon coffee shop and wait. 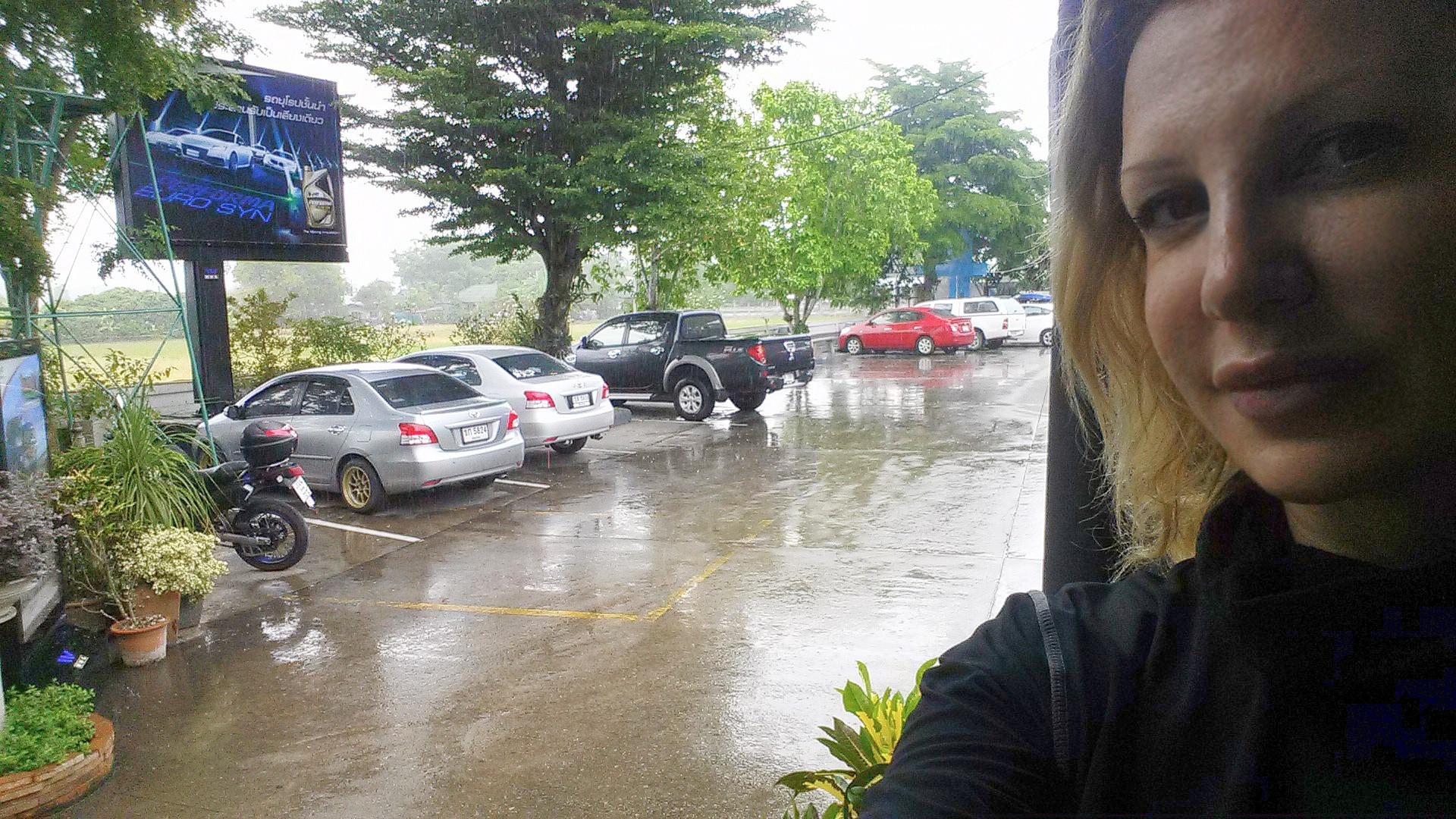 I arrived at the coffee shop dry. However, within moments of sitting down the heavens opened up and a massive downpour came! I confess I felt a little smug for getting there before it rained (I had to have some feeling of compensation for arriving so early :p), although I did feel bad for the other two ladies. I also worried that maybe they might also want to cancel (no fear there as it turns out, as in the end they were well up for the ride come rain or shine!)

I sat and watched the rain for a while before my friend Opal turned up first, followed a little later by my friend Sam. We chatted for a bit until the rain eased off, then excitedly geared up and headed off.

A little about this route.
The 1095 is a gloriously twisty road (762 curves – apparently) which is part of the Mae Hong Song loop, a famous northern loop. The Pai section of this route is the twistiest part and my personal favorite. Twisty and technical roads get me buzzing and I love the adrenaline rush i get when on an exciting unpredictable road.

The road was wet and slippery in sections, but not the whole route. Some completely dry areas, followed by some very wet areas, followed by dry areas..and so on. Which is all part of the fun. Makes you feel like you are experiencing many seasons and have to adapt to each section as you go along. I don’t worry about getting wet in rainy season as long as the weather is still fairly warm. I keep a rain jacket and trousers in my topbox in case it gets very heavy, but in general I just leave the rain gear off.

On the way up we stopped at 32 Coffee Hill, which is approximately half way along the route. It had been coming down a little heavier rain-wise, so made sense to stop off for a bit. As we pulled into the carpark there was a Ducati Monster parked up. Sam was first off the bike and down in the coffee shop and when I arrived she was chatting to the Ducati owner like they were old friends. I was rather impressed by Sam’s people skills, until I found out that they were in fact actually old friends, haha. Small world around these parts really.

A chat about motorcycles and gear was had over hot drinks (..and seeing as my boots look like they belong to the walking dead, it was good to have a conversation which included what boots people prefer. I intend to replace them fairly soon……….). 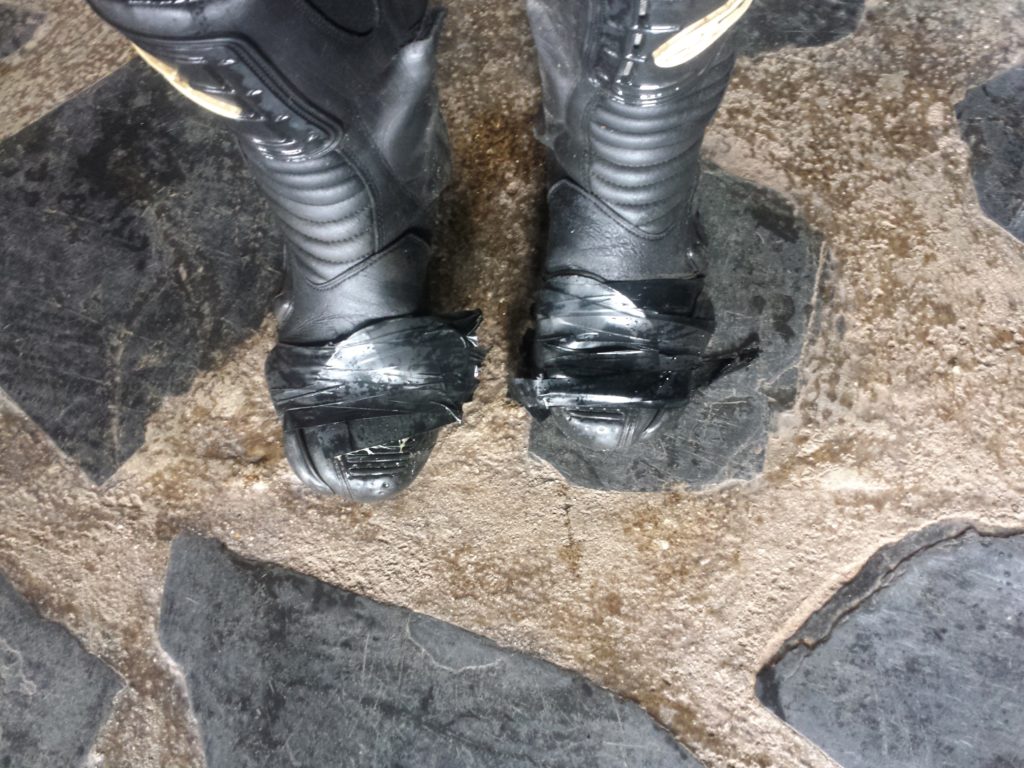 The worst of the rain passed and we parted ways with Mr Ducati to carry on the ride.

The road was fairly quiet considering it was a weekend. The usual minivans were around, a few work vehicles and big trucks, some rural/local riders on beat up scooters and a few random tourists on 115 cc bikes. One couple were parked randomly on the side of the road and Sam told us later she had pulled over to check on them. Apparently they had skidded and fallen on the wet slippery road. They were ok but a little in shock. I felt bad hearing this because i had ridden past them. It is easy to forget how hazardous this road can be, especially for newer riders and those without protective clothing. In truth this is not the season to go riding the Pai road if you don’t already have some experience.

We made very good time, although I actually don’t know how long it took us as i didn’t keep the time. The ride was over fast though. We arrived at “Heart of Pai” resort, our chosen accommodation for the night. This resort is within walking distance of the main hub, but away from the riverfront. We decided that given the weather warning it would be best not to be right on the river. Heart of Pai was in a good location and turned out to be very nice for the price.

We parked up our bikes for the rest of the night, checked in, then arranged to meet in half an hour after tidying ourselves up.

Half an hour later Sam was like “SO!”, claps hands together, “… who wants beer?!”…and that is pretty much how the rest of the day and evening went, followed by eating and walking here and there around Pai town. We also met up with Sam’s friend Tom (the Ducati owner we had bumped into at the coffee shop) and it turned out to be a very funny night.

It also was dry the entire time. Not a drop of rain in Pai.

By around midnight we called it a night, but not before stopping at the 7/11 for some random junk food (as is customary) and to take some stupid photos… for no particular reason other than we thought it would be comical...er ..yeh….

I slept well that night.

Late morning we headed out for breakfast in good spirits, to a local Thai place.
We arranged to leave by 11am-ish and stop off at Mok Fa Waterfall before heading home.

The ride back was pretty much dry most of the way.

Considering that there was an extreme weather warning, we were very lucky.
I remember thinking about that on the ride back and smiling to myself, feeling glad that we didn’t postpone the trip. We would have been kicking ourselves if we had stayed with the weather so nice as it turned out to be.

Around 130 km into the route we stopped at NineBar coffee shop. The combination of coffee and adrenaline made us hyper. So much so we made a nutty dance video. HOWEVER, upon reflection the girls didn’t want me to upload it…haha. You will just have to use your imagination on that one. 😉

I rode ahead and planned to slow down before Mok Fa waterfall. However, when I turned a bend I was suddenly already at Mok Fa! Dammit! So, all I could do is pull over and wait for the girls and flag them down. Murphy’s Law dictated otherwise though. For although there was little traffic on the road, my friend Opal came around the bend just as she went to overtake a vehicle that was in front. She was so focused on that, that she didn’t see me!
ALkj;lkjg-Arghhh!! She was flying, so there was no point in getting my helmet back on and trying to catch her. We were not too far from the end of the Pai road anyway, so I figured she would realise when she got to the end that we had missed each other. I waited for Sam and then followed behind her to catch up to Opal.

We regrouped and discussed different options including if we should ride on to do the Samoeng Loop or not. Opal liked the idea of the waterfall. I agreed. So we headed back, passing a couple of backpacking hitch-hikers with a “PAI” sign as we did the U-Turn.
Good on them really, why not! 😀

Not too far along we reached Mok Fa national park turn-off and headed down into the park. We parked up and headed to the ticket booth. As expected there was dual pricing.
It used to be that a Thai drivers license sufficed for the Thai rate, but now that so many foreigners have obtained one that perk has disappeared. Sam didn’t have her work permit with her and I don’t have other ID. Even though we spoke Thai with the ticket lady and explained that we were only staying about 30 minutes, she wouldn’t budge. We decided to just pay the “farang” rate and go enjoy the waterfall. I know there are many mixed opinions on this dual pricing, but personally it grates on me. Especially if you speak Thai. Anyway…. getting past that point…

The waterfall was beautiful. It was flowing quite well but the pool was still fairly shallow.
Last time I was there (quite some time back) the water level was very high. At the same time it was also crowded. So, I think i would rather have a more shallow pool and no people. This is the luxury we got. We were completely alone the whole time until we were dressed and ready to leave. Very good timing! We had also bought some Chinese steamed buns from a couple of vendors in the park, so ate them and relaxed. There were no sounds of traffic, only the restful sounds of nature. When we left we were relaxed and happy.

At the car park area we hugged our goodbyes even though we planned to ride the last leg of the route together. Easier to say goodbye at this point and concentrate on city traffic and exit points on our own.

Arrived in Chiang Mai and to my home feeling great.
Pretty much one of those trips to store in the memory bank.

Thanks ladies, it was great. ..and hope we will do it again! 🙂

Full video of our ride trip ❤ :