Kawasaki Cyclecross on Tour 2017 (Round 1 – in Chiangmai)

Sunday 7th May 2017 – Round 1 of the Kawasaki Cyclecross on Tour trial races, at Don Pao in Mae Wang district. *VIDEO of the event at bottom of page*

I was invited along to this event to support two girl-friends who were joining the race. I had no real idea of what to expect when we got there and I honestly didn’t think it was going to be this big or this well laid out.

The event was held at the campus grounds of โรงเรียนสารสาสน์วิเทศอุปถัมภ์, which was set up with team tents, food & drink stalls, medical facilities, public conveniences (squat toilets) and of course the dirt course itself. 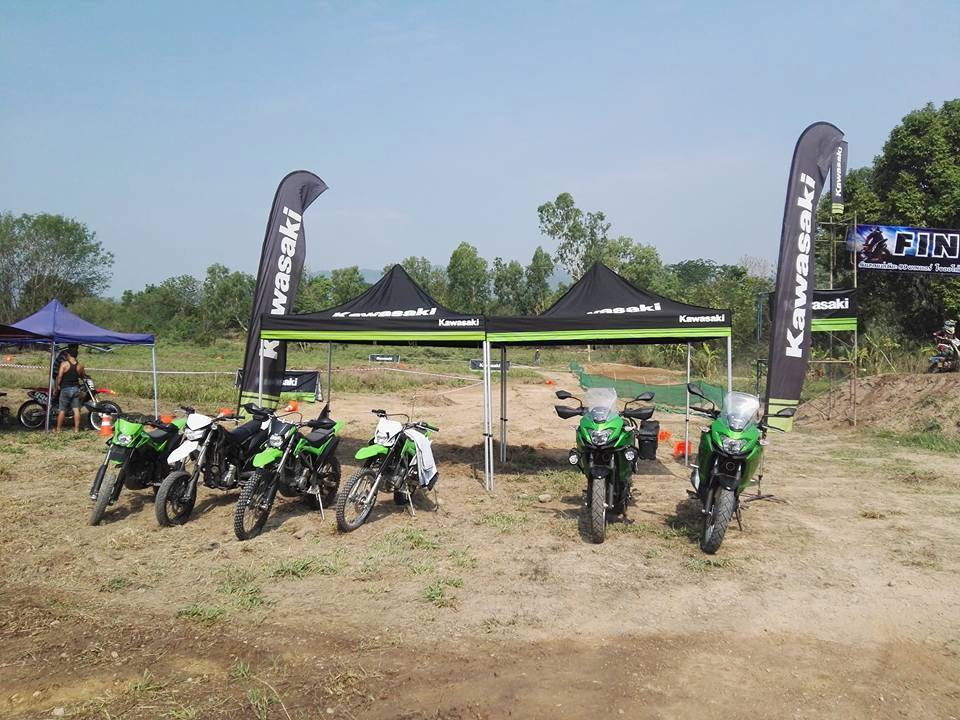 Kawasaki Thailand also set up a side dirt track for the public to test out their KLX 150 bikes and Versys 300.

A fantastic opportunity to take these bikes out and have fun on dirt. 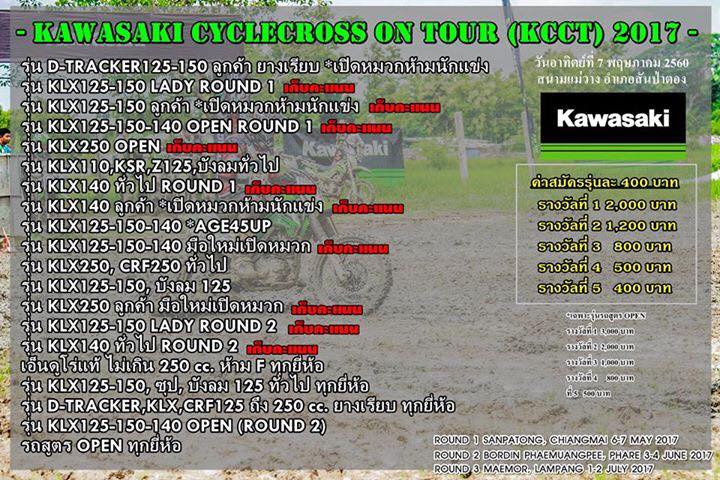 The races had various categories, including lady race and children’s.
I went along to support my rider friends Wasa (Ride Horizon) and Janni, who were participating in the lady race category. They were pumped with energy and enthusiasm. It was electric just being around them.

Registering for the race – Registration costs on right image

If you have ever been to any event like this before then you will know how the sound of bike revs in unison can vibrate the very core of you. The riders lined up in front of the starting gate and the intermittent revs slowly built up in unison to a crescendo, until it became a deafening hum. The intensity in the riders eyes was electric. Radiating concentration. When the barriers dropped the cluster of riders vied to be first on the initial curve. It was intense. Lots of battling for premier position and several collisions, slips and falls. Though thankfully no casualties. 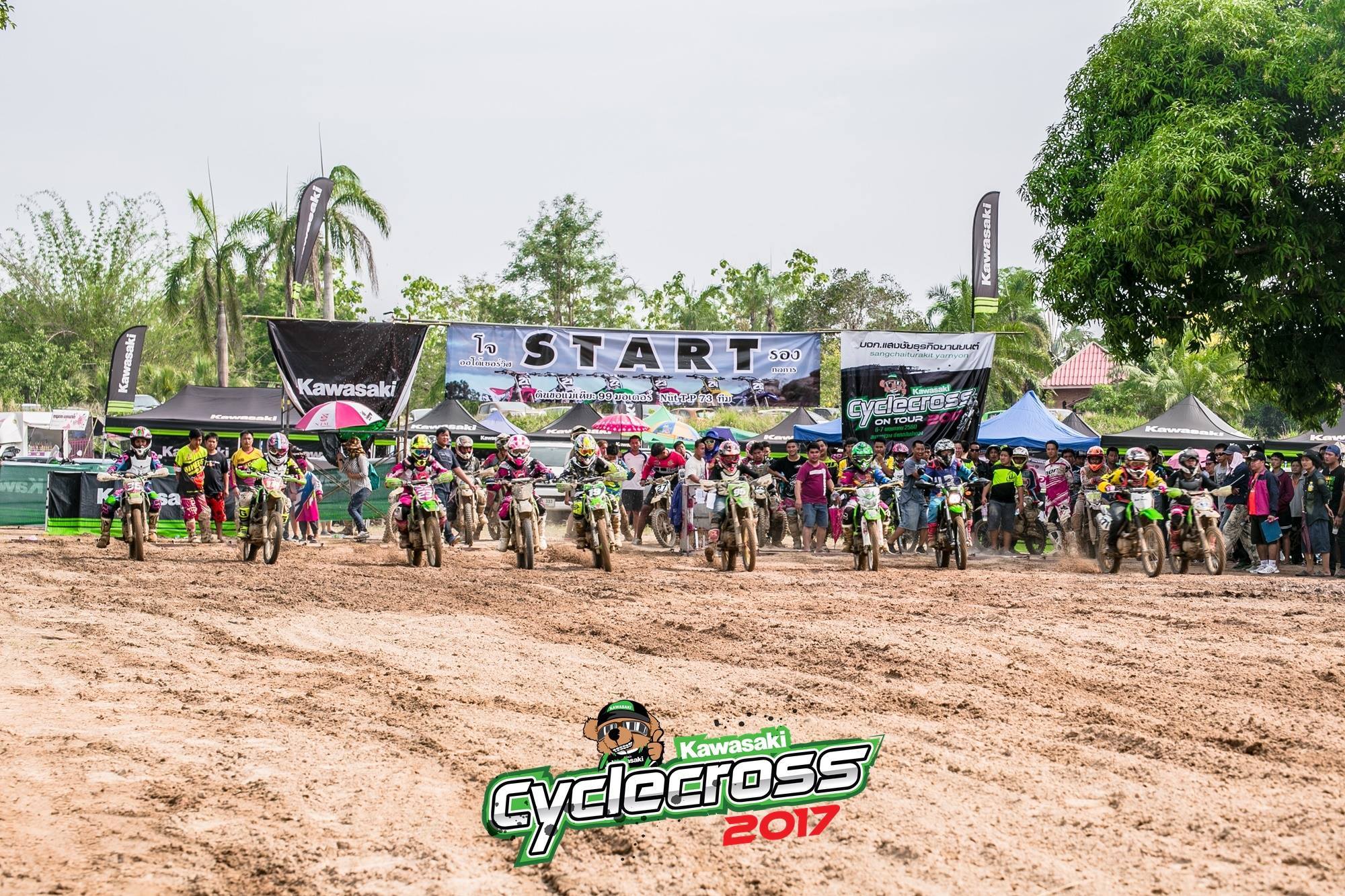 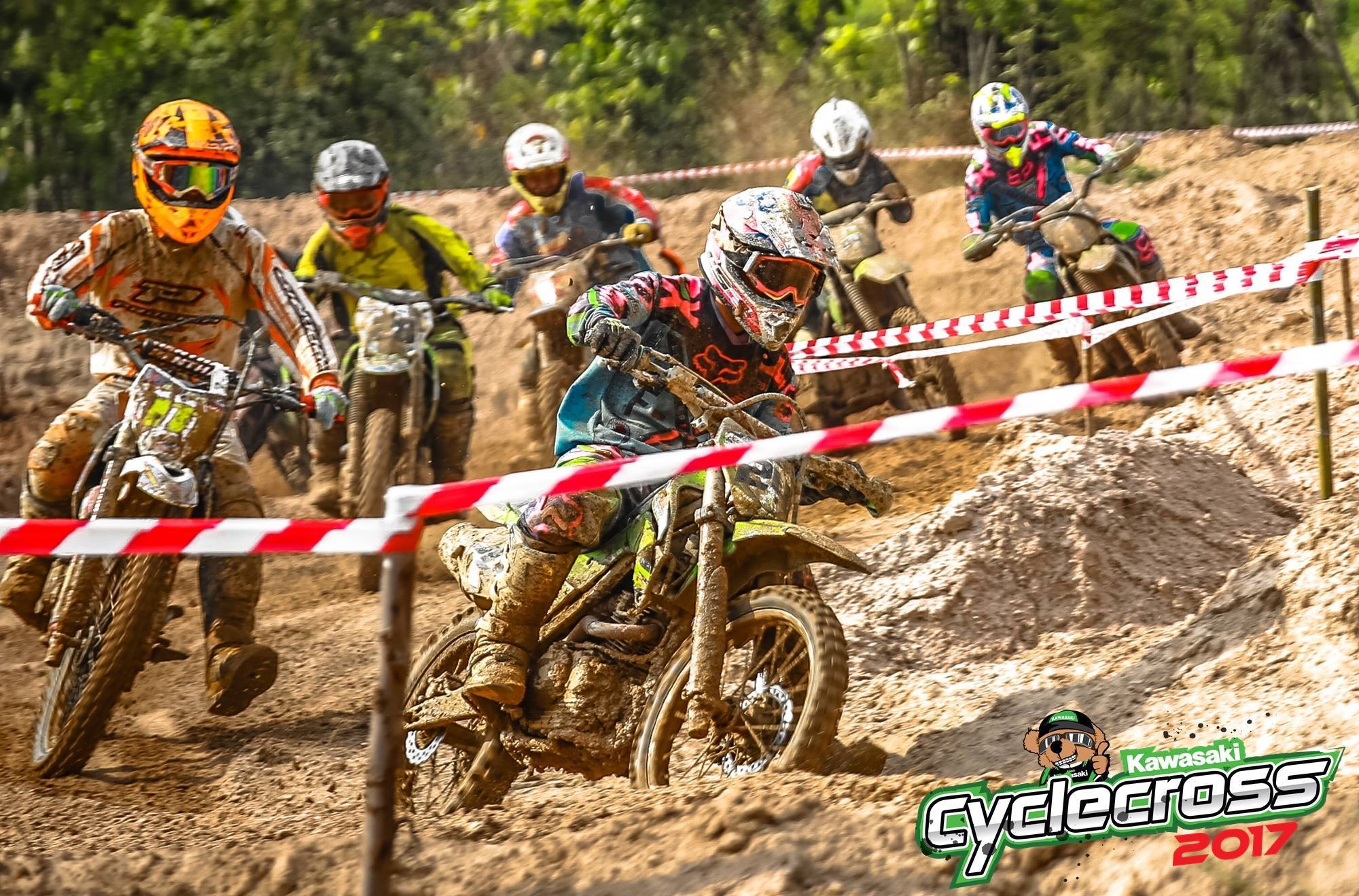 I was particularly excited to see the lady riders lined up and I found out that one of the ladies participating is the National Enduro Champion. When the race took off it was obvious why she is the champion for she sprinted through the track and pulled off some impressive jumps. She won (..as expected).
Fantastic to see this quality from a female rider with my own eyes. 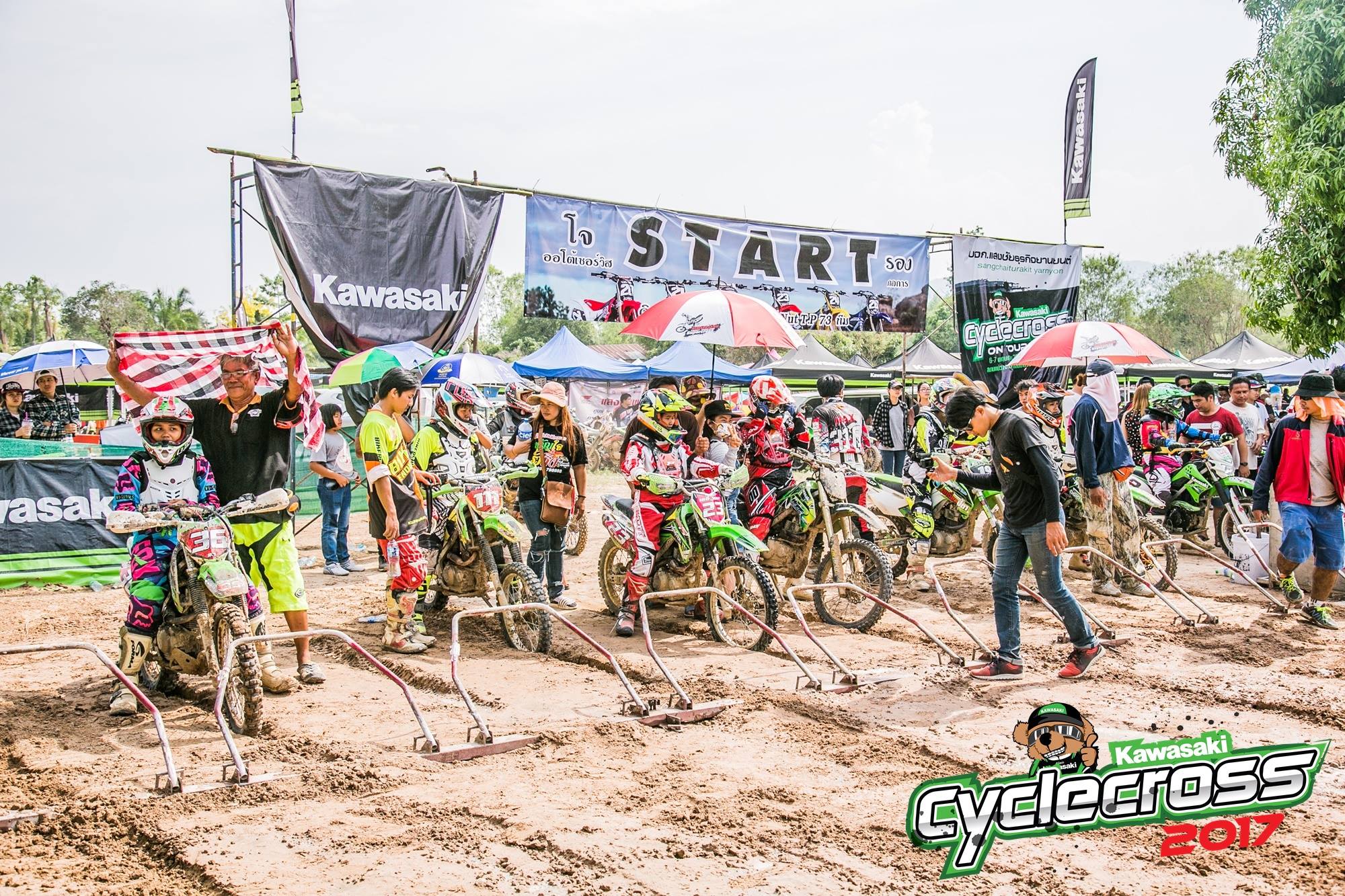 As for my friends Wasa and Janni, this was their first trails race. Wasa already had some dirt experience but Janni had only just recently completed a two day dirt course.
Love their spirit and they did great! 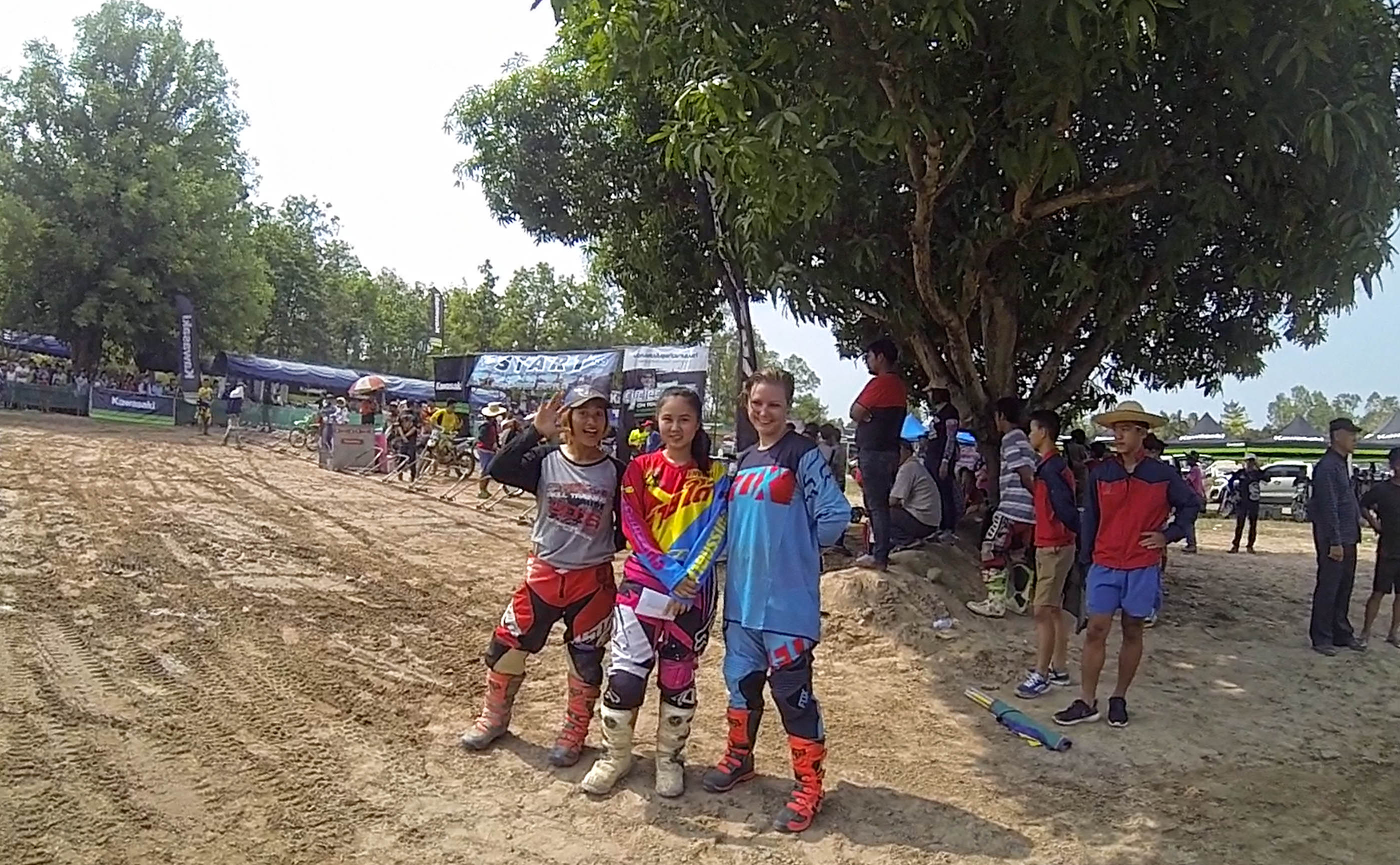 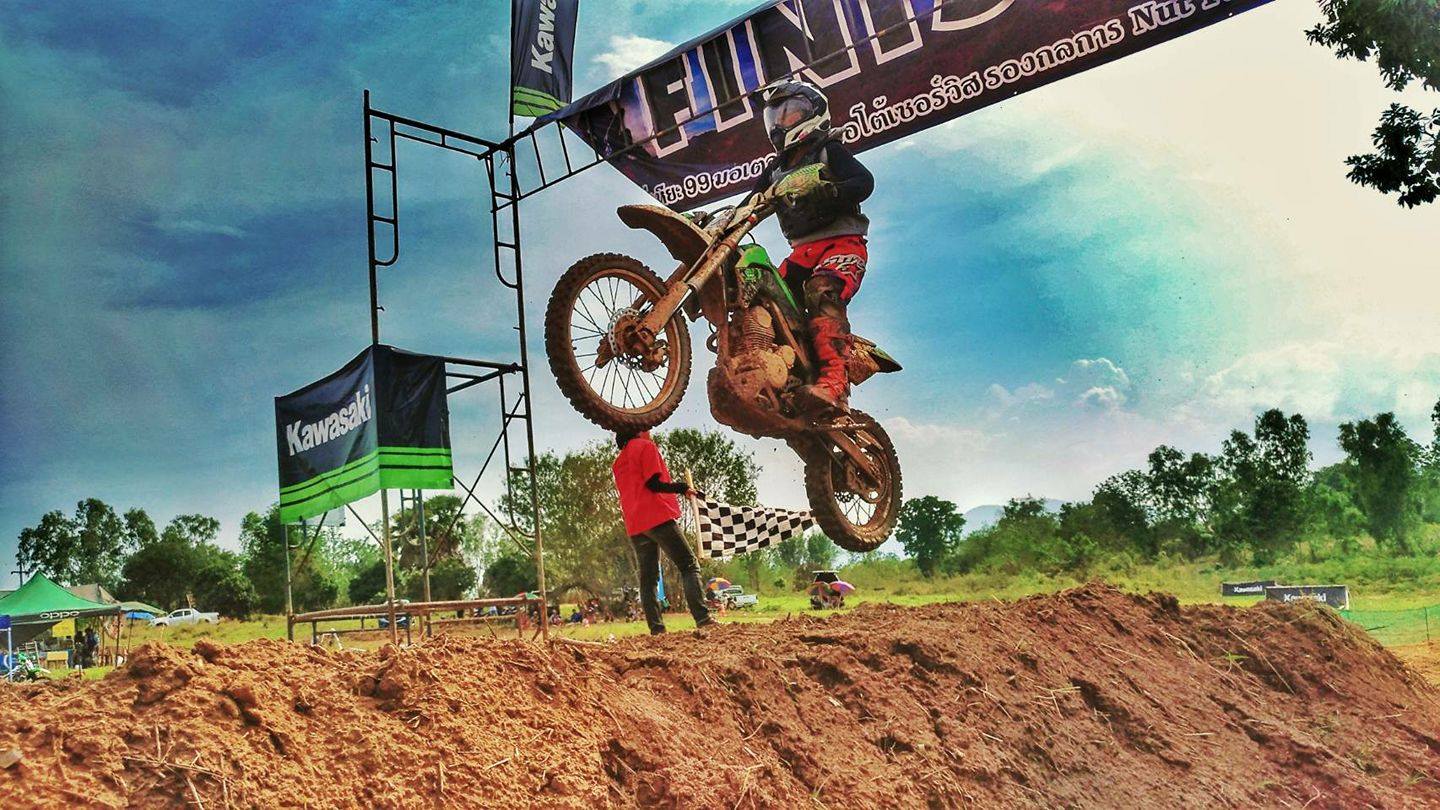 No matter what the age range, the riding was intense, with the most dramatic viewing being the mens race on KLX’s. All age ranges were fast and furious and was exciting to watch as a spectator. 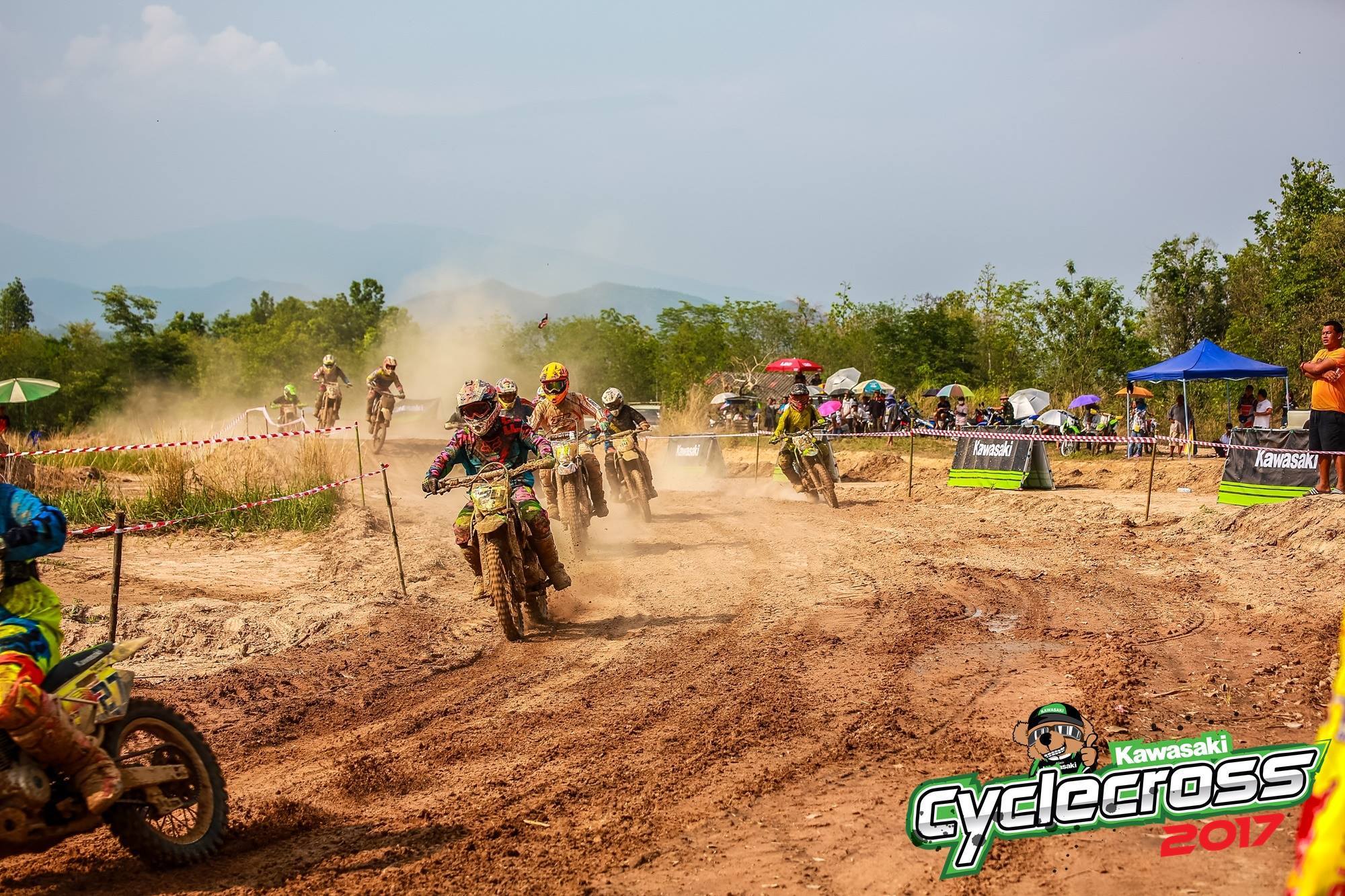 However, as exciting as it was I did find myself getting little frustrated at only spectating. Wasa came to the rescue though when she told me of a Kawasaki free test ride stall just down from the main track. Kawasaki Thailand had set up a tent and dirt route for the public to test ride their bikes. Fantastic! I first took out the KLX 150 and later the Versys 300.
Funnily enough, when I took the little KLX out I slipped and fell! I laughed at myself. I have actually been wanting to fall for ages, as strange as that sounds. What I mean is I haven’t fallen off my bike in a very long time and since my accident I am fearful of falling. Part of the reason I took on the Honda Safety Dirt Riding course was to additionally help conquer my fear or falling. Well, falling in a safe way that is. When riding the CRF L 250cc at Honda I didn’t fall and was almost annoyed about this, because I felt i didn’t fall because I didn’t push myself enough, keeping within my safety levels. Being on that small KLX 150 was fun and i didn’t worry too much about falling, so when I did all I could do is laugh at myself. After trying the KLX i took the Versys 300 out on the small track which I found surprisingly ok to maneuver.
My friend Wasa took a video of my on the KLX when i first went around the track but sadly the battery died before I got a chance to relax into the bike and before i got to try out the Versys. She took some photos I think though, so will update later when i get them.

Later on Wasa’s uncle kindly let me try his KLX 140. I honestly LOVED that bike. It had so much torque and was easy and fun to maneuver. Seriously considering the possibility of buying one in the future now…

Back to the event. One of the nicest parts of this experience was the wonderful Thai hospitality and general happy vibe. I had no indication of big egos needing stroked or bad vibes of any kind. The support and laughter and good nature shined through. The riders were all very supportive of each other and the crowd was in great spirits. Not once did I encounter any kind of odd vibe or anything negative. Was very much a whole community enjoying the event. 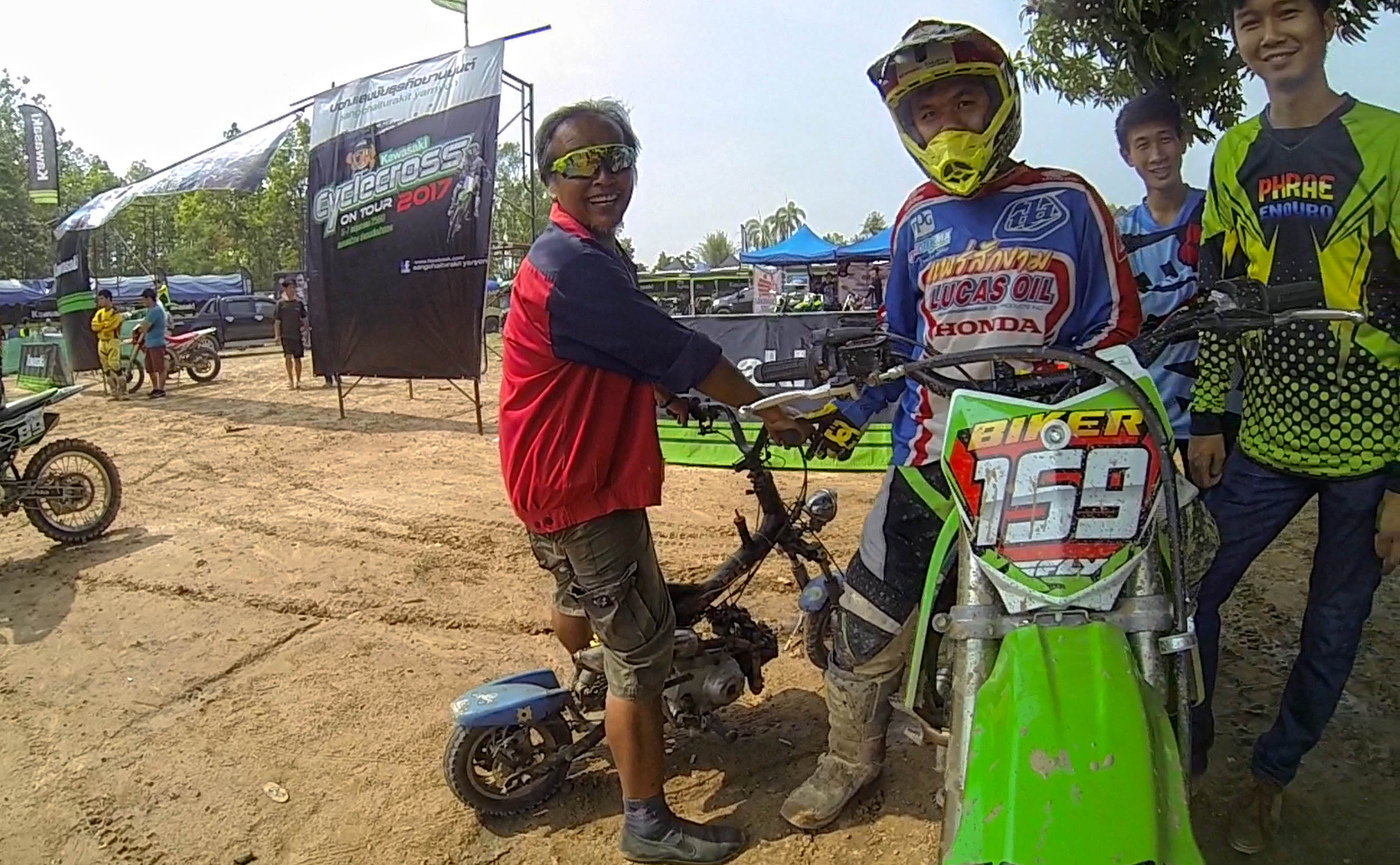 Was good to see plenty of medical staff around too. Plus emergency vehicles. Again thankfully unused that day. The medical tent also provided fresh cool water for those who needed it. However, there were plenty of stalls selling water and cold drinks. 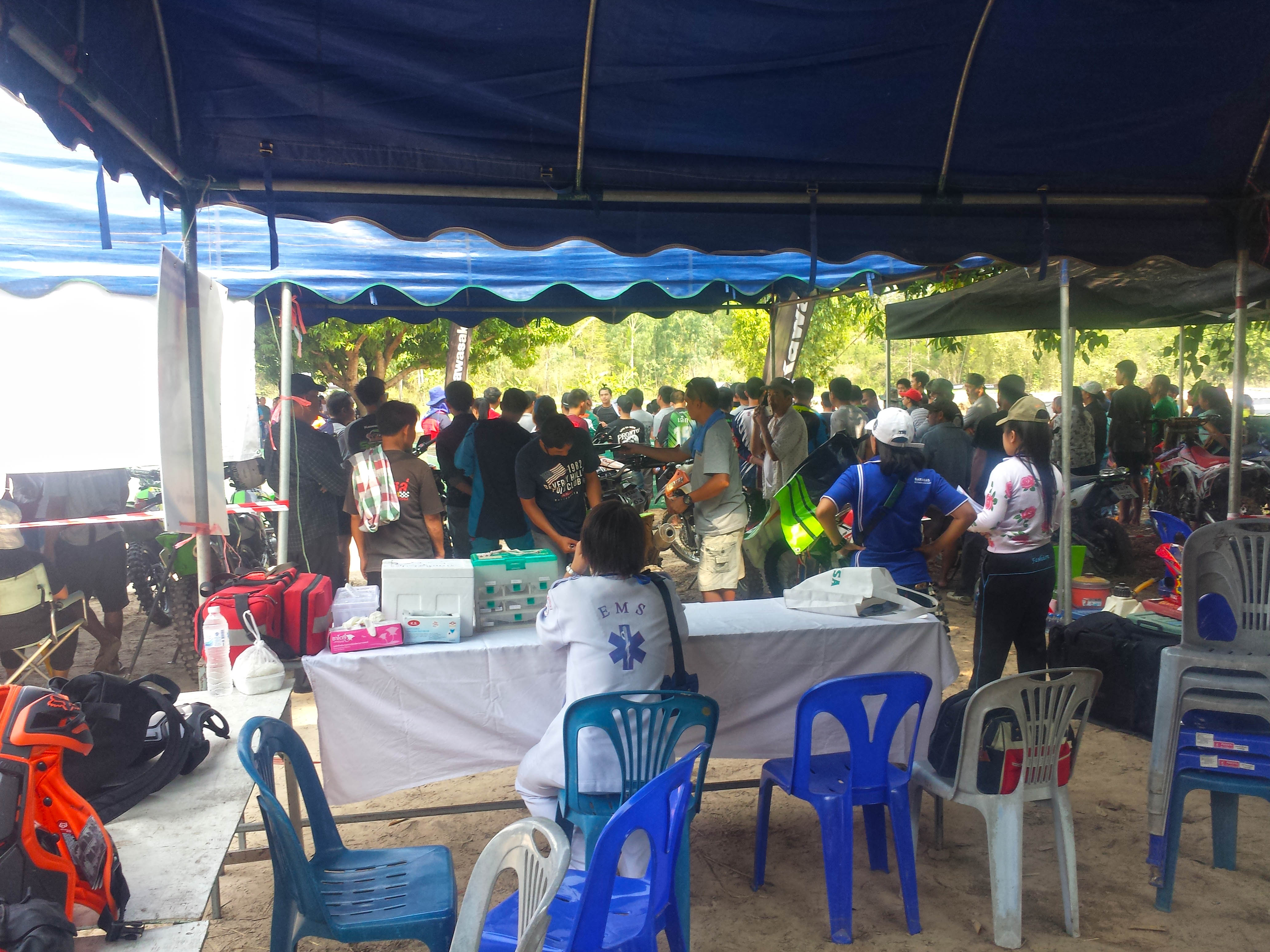 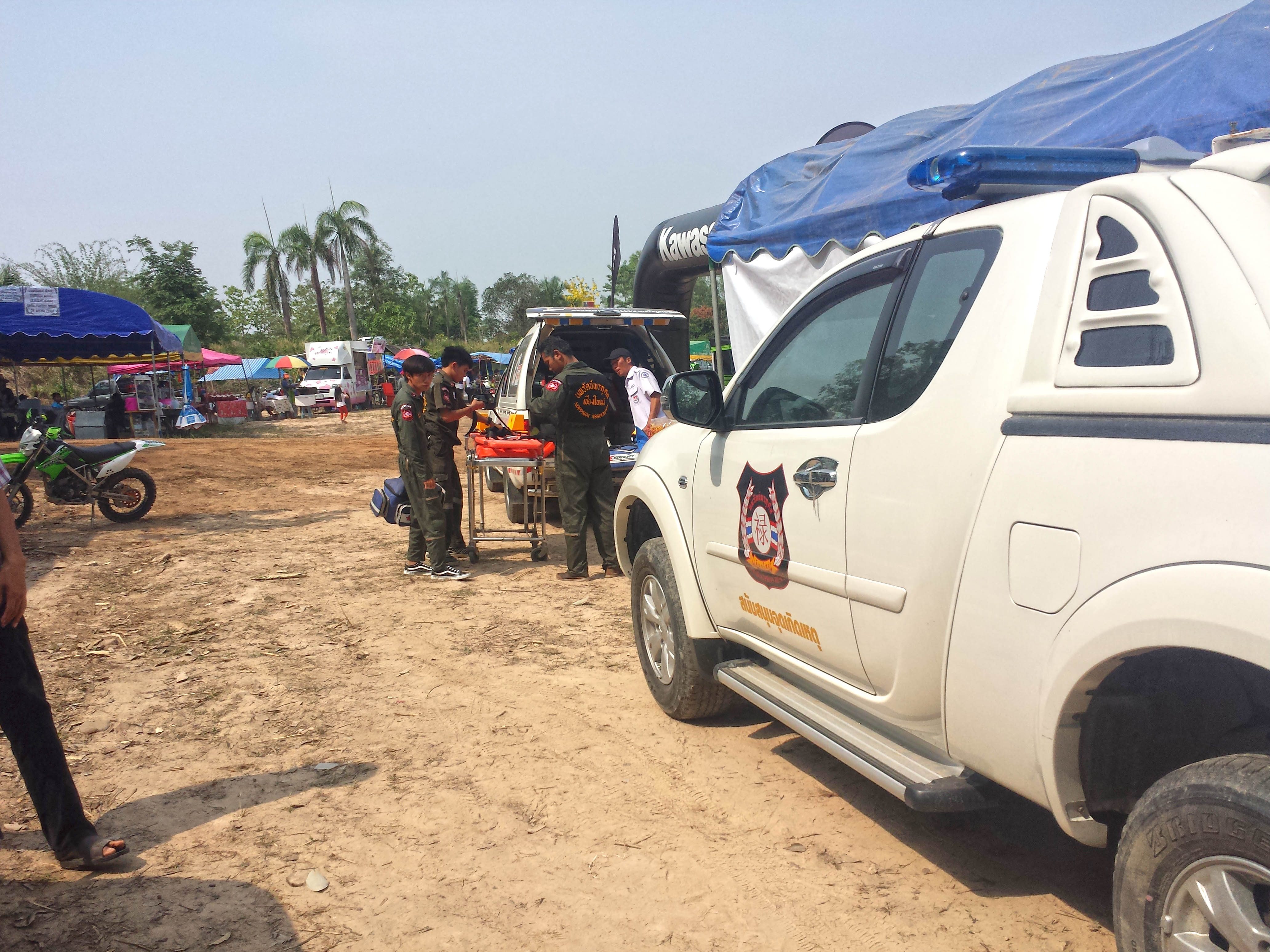 I do actually really wish I had participated in the event myself. Wasa asked me if I wished to join in on the 2nd lady race. I weighed up in my mind if i should, and although I itched to do it reason won out. I currently have boots that are so worn out they are supported by electrical tape (!!) and the idea of one small ankle twist or issue wrecking the rest of my riding plans put things in perspective for me. I still itch to try it..and hope to get a chance in the near future.
Plus in all honesty I also felt a little shy to race in front of a huge crowd of people.
I admire Janni for doing it, being the only foreigner (and a foreigner woman). Lots of eyes on her that day!
I hope to get over my nerves of being watched for the future…and of course I need to do some boot shopping too!

If you are interested in viewing the next races (or taking part), here are the next three event dates: 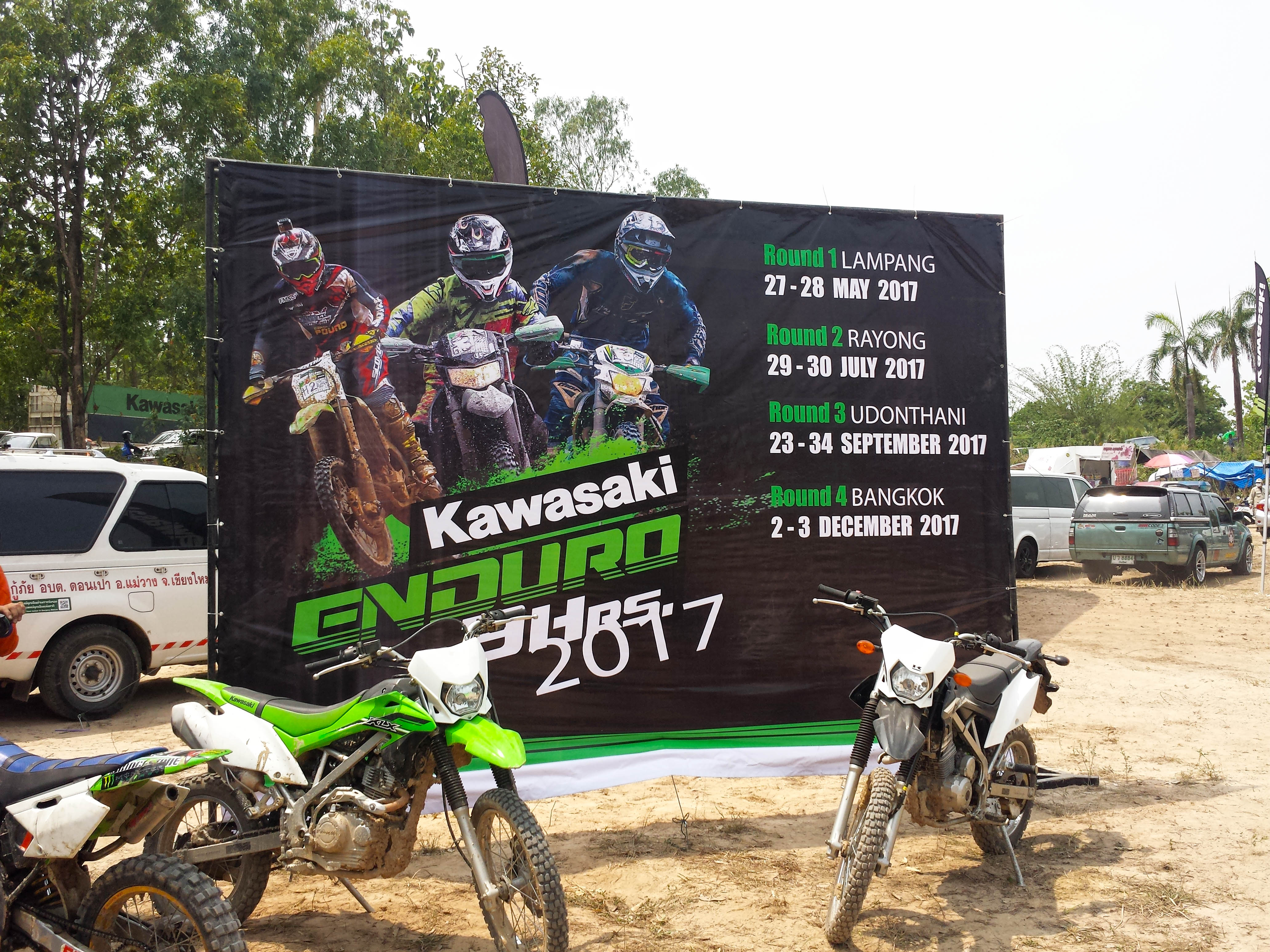 For location and details keep an eye on the Kawasaki Thailand Facebook page, which will post up details.

For a FANTASTIC album of PHOTOS from day 1, go to my FACEBOOK album HERE

…and here is a short video from the day: