(9th May 2019) Hmm..seems I am possibly developing an iron butt. Not in terms of km’s per say, but in terms of hours in the saddle on tight twisty roads, on my 250cc. In fact, I sort of dislike even being asked how many km’s my bike has clocked up, because for me the amount of km’s is meaningless really. A straight highway road on a fast bike can clock up the kilometers in no time at all, but riding tight twisties, rural roads and trails, will hardly clock up any km’s at all. ..but anyway, I digress.

So my annual Thai visa was coming near its end, and I needed to make a border crossing. I initially planned a route for Mae Sot (south), which would take longer than the northern border of Mae Sai. However, a stomach ache kept me up the ENTIRE night beforehand and given that the temperatures had been reaching around 40 degrees centigrade, I decided at the last minute that the closer border route would be better. Thus Mae Sai became the destination instead.

FULL ROUTE (Google Map Link) – Link does not include the small soft trails I explored. 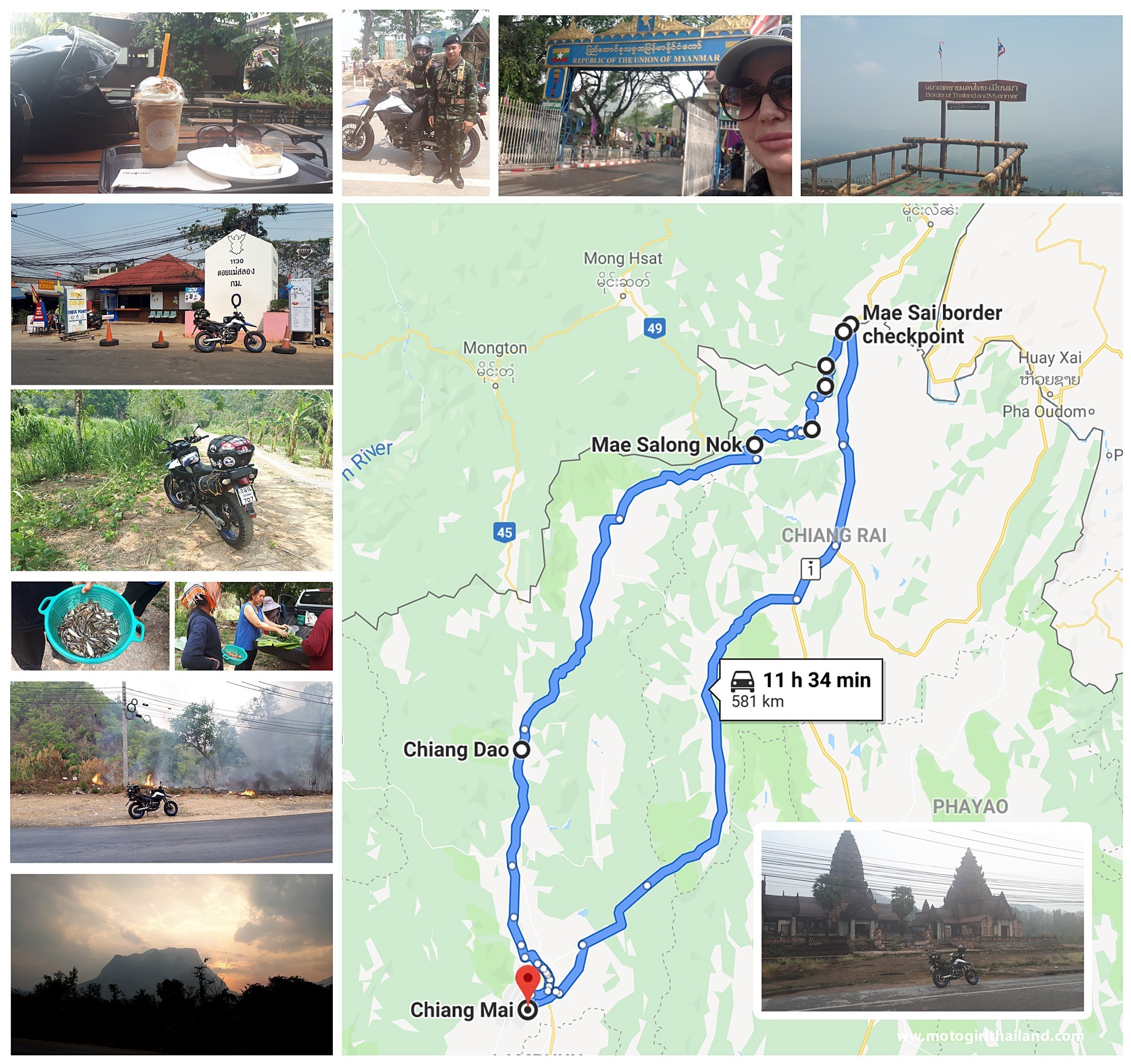 Thursday 9th May – approx 4:30am.
At stupid o’clock in the morning (aka approx 4:30am) I was ready to set off on my trip. As mentioned earlier, I hadn’t slept that night (was up all night with some weird stomach pains), so i figured I may as well try beat the heat and traffic by riding early, even if initially a bit slow due to the darkness. There was no point wallowing in self-pity over the stomach ache and I knew if i was riding it would shift the focus off my sore stomach onto the road instead. It was a bit of a dark ride, but also very peaceful. Friends have warned many times about riding in the dark, but in truth I love this sort of dead time between the night owls and the early risers. Most of the mad drunks are already in bed and most of the early risers aren’t quite up yet. It’s a great time!

It began to get light at about 5:30/5:45 and by then I was at Mae Kachan and the fantastic “Angkor What?” abandoned luxury spa building. More info on this building is included in this write up HERE. 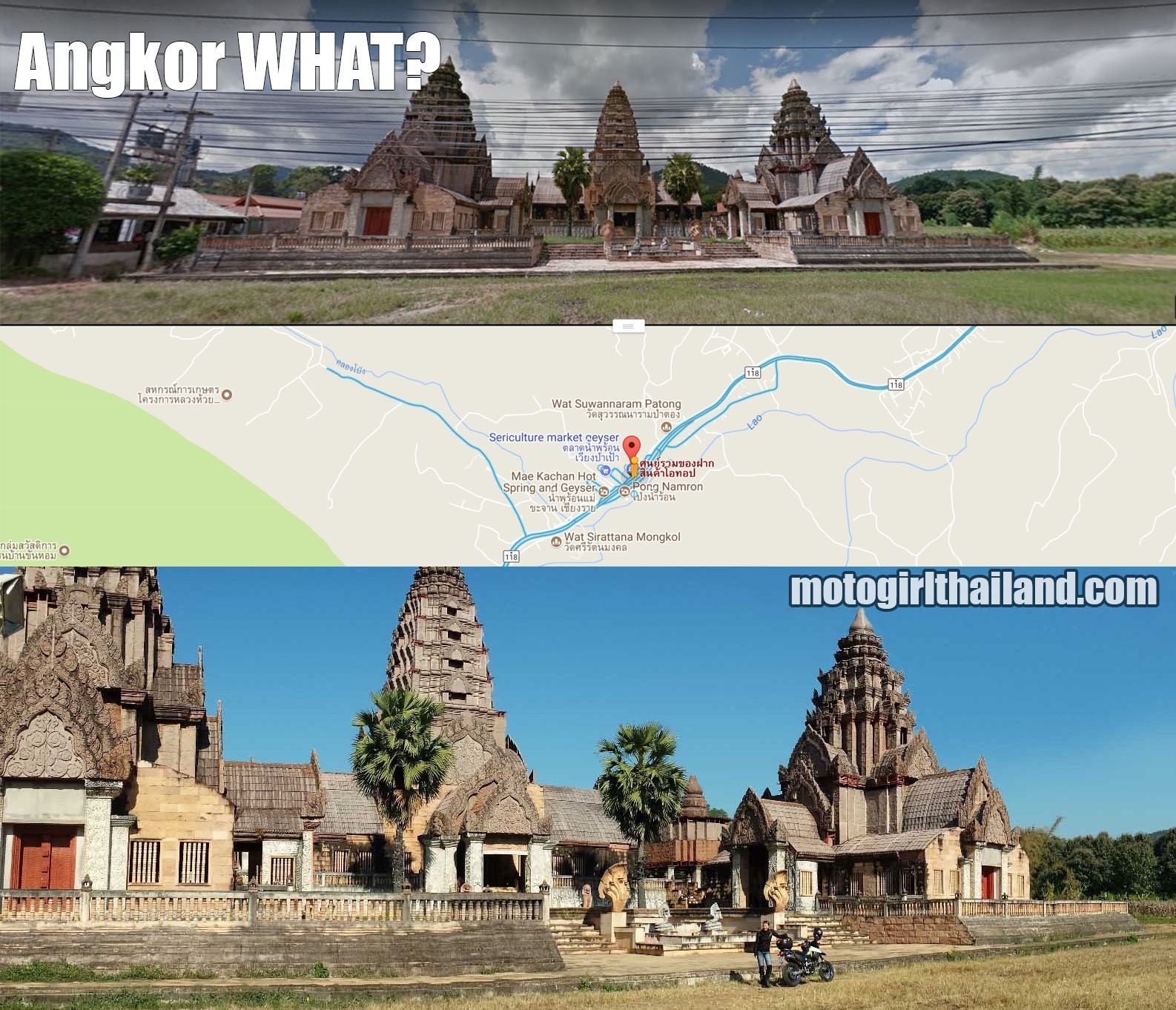 Unlike the photo above (which was taken a couple of years ago), it was a little more spooky at that time in the morning! Haha.

After a quick walkabout inside the building I headed straight up to Mae Sai, stopping in at Aman Coffee (a short distance from Mae Sai border) for a cool iced coffee, before making my way over the border (on foot). By then it was around 8:30am, so i had made ok time despite having ridden in the dark for a while. 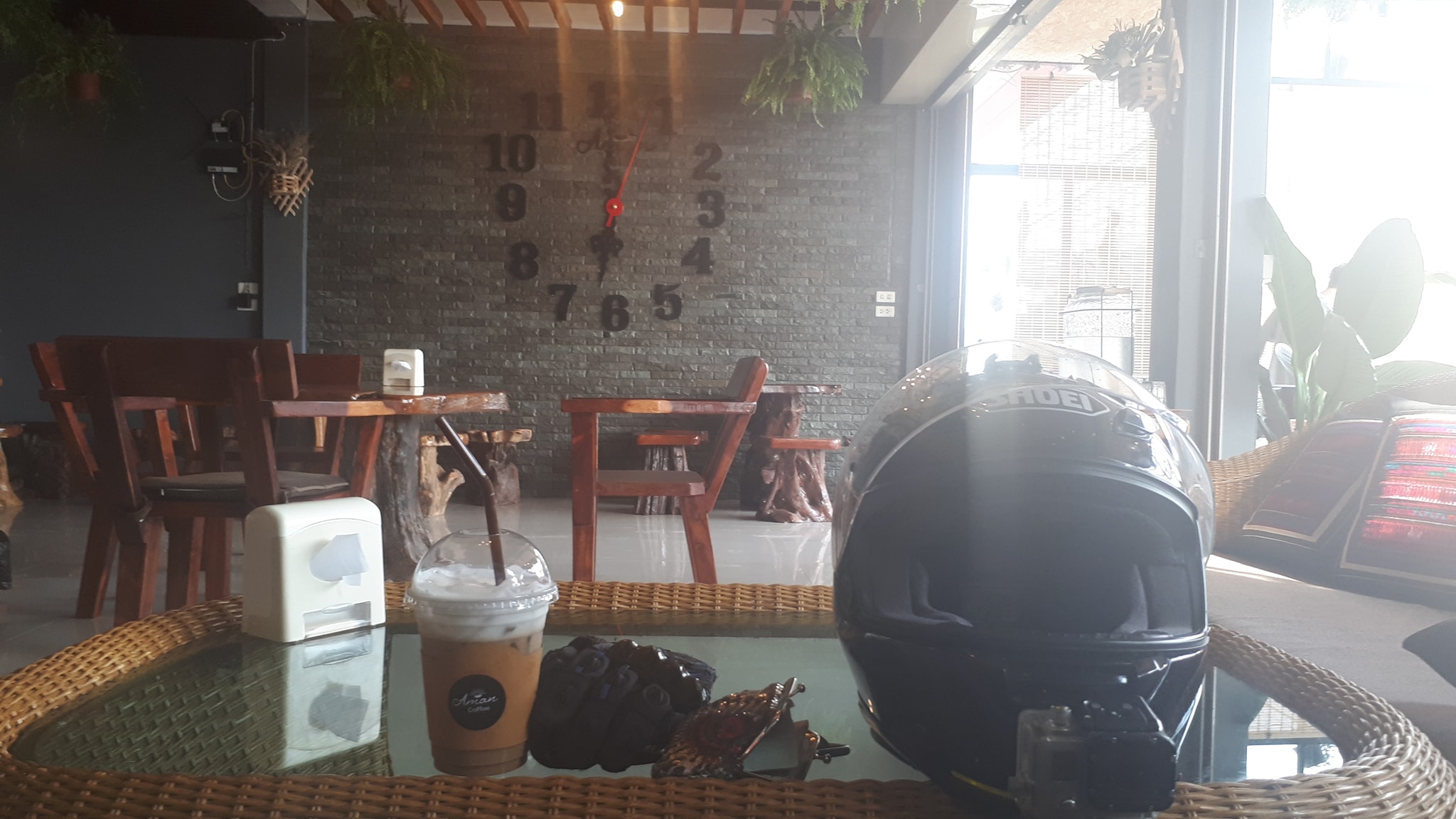 At Mae Sai I parked up and got myself over from the Thai side into the Myanmar side, where sorted out my Myanmar stamp and stopped in at the duty free. 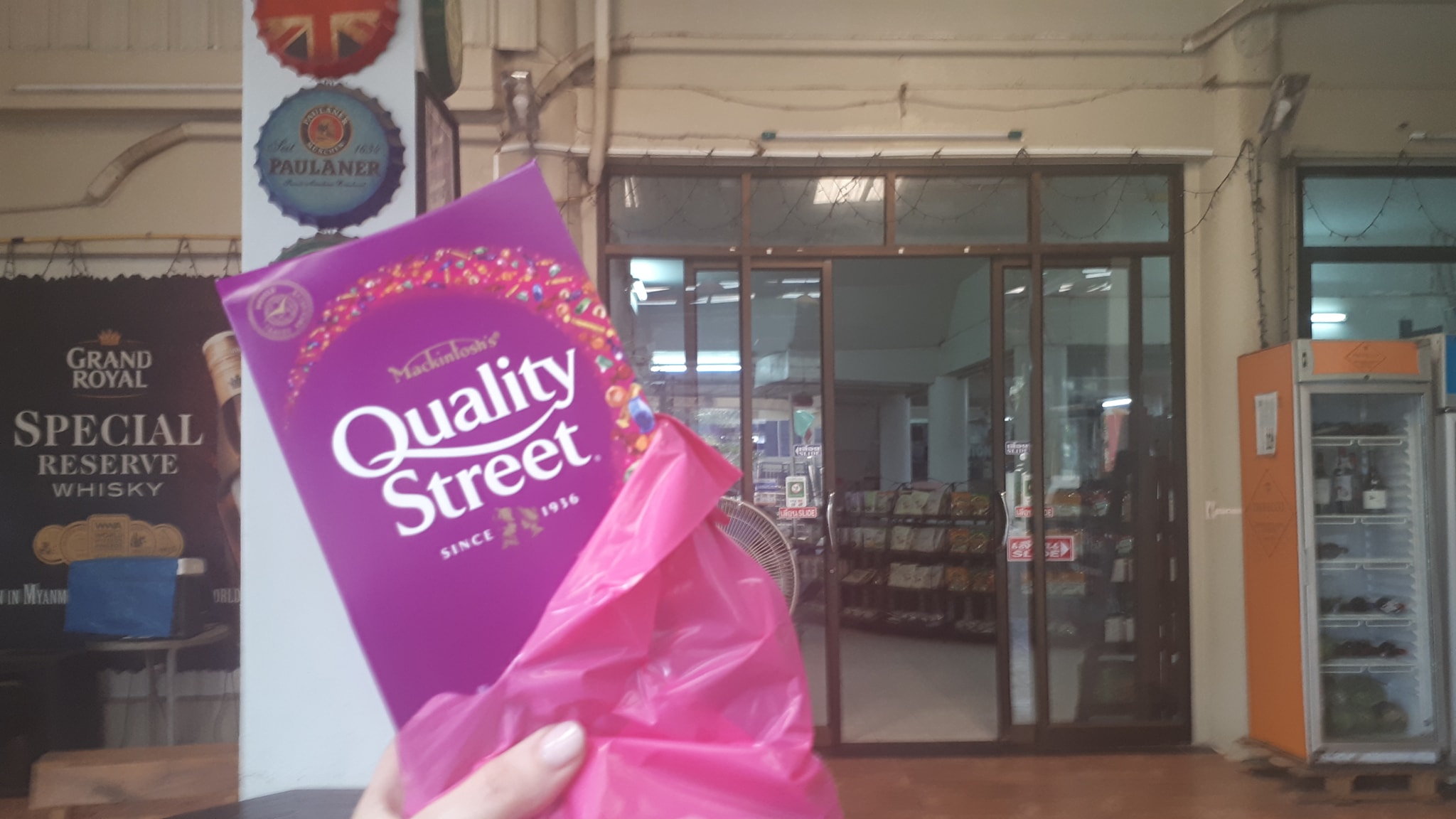 I got my visa/passport malarky sorted out on the Thai side and headed back onto Thai soil. I grabbed some food at the local market area and then walked back to my bike. The temperatures were already rising despite it being only around 10:30am. I knew it was going to be a hot long ride back home..the long way back. I got on my bike and headed through the market zone and onto the fab R1149 border road between Thailand and Myanmar.

Soon I was riding on the best part of this road, via the Army checkpoint (sensitive border zone area).

Of course, I had to get myself a photo op at the Army checkpoint first. Haha! 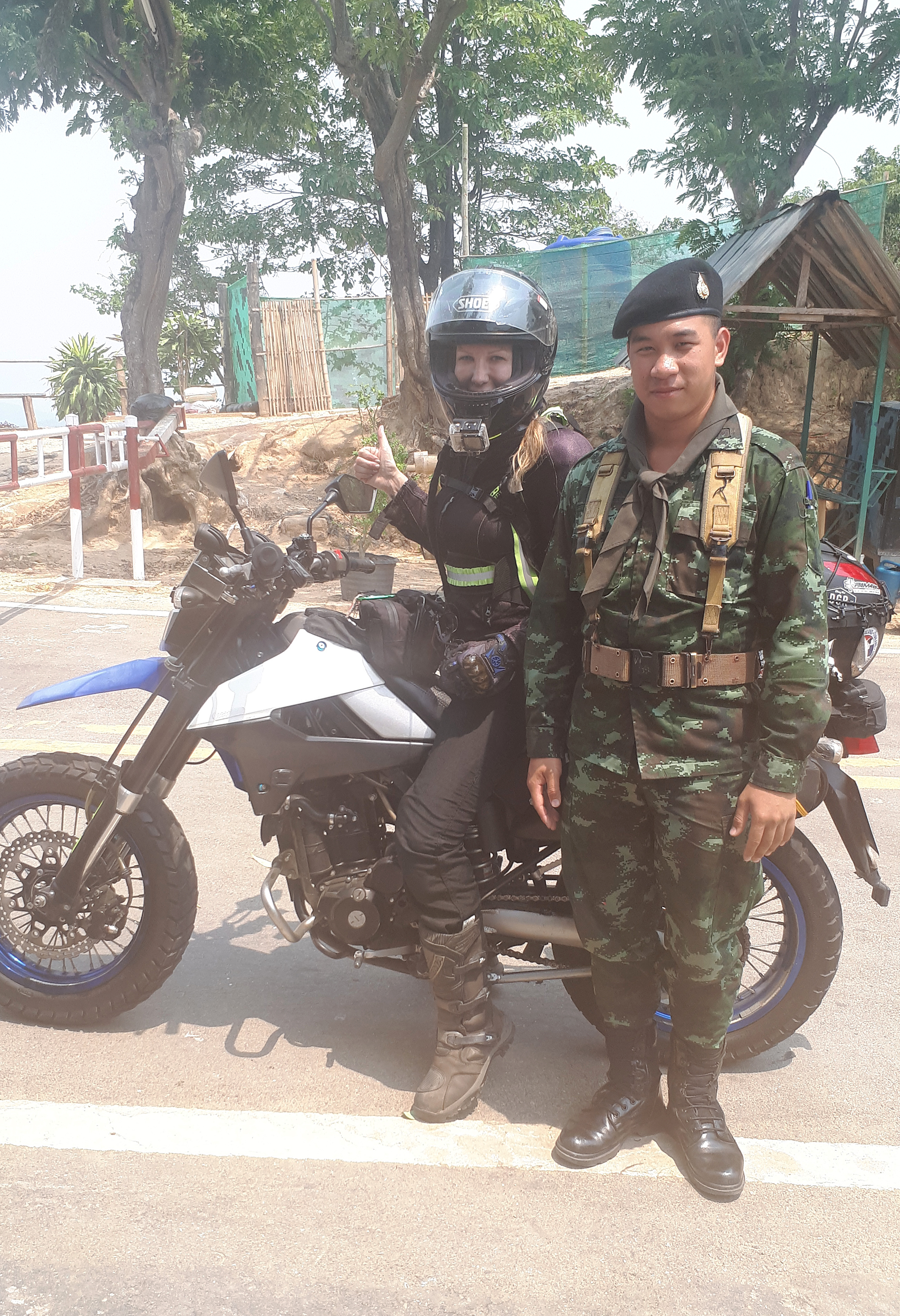 This section of road between the two checkpoints really is quite fantastic, with some tight sections that gets the heart racing. You have no idea what is around the narrow corners, or if another vehicle is coming the opposite way. There is not a lot of room for maneuvering with drop-offs either side. Fun! ^^

After the next Army checkpoint exit area there is a lookout point with trenches and even a coffee shop. It is always great to stop in at this area before heading into the Doi Tung mountains. ฐานปฏิบัติการดอยช้างมูบ

Border of Thailand and Myanmar/Burma.  Still some haze from burning, so the view is obscured. Amazing road for riding on thought. The R1149.  A fantastic one to ride! 😀 . . . #thailand #r1149 #myanmar #motorbike #adventure

I told myself to fill up my bike before leaving Mae Sai, as I knew the chances of finding fuel once i hit the r1149 was slim.

Oh but as it turns out I didn’t listen to myself, because I was well into the mountains and my fuel light began flashing. LOL. I decided the best thing to do was to switch off my engine whenever there was a decline and roll down, in order to conserve fuel.

Thankfully that worked out well and I eventually found a small vendor selling 95 gasohol in glass bottles.

The Doi Tung mountain road was glorious as always and I stopped in at the Doi Tung Coffee shop to have a Doi Tung (macadamia) Coffee on Doi Tung Mountain! (..oh and a rather decadent caramel macadamia nut cheesecake too). There is also a fantastic garden area to visit here. 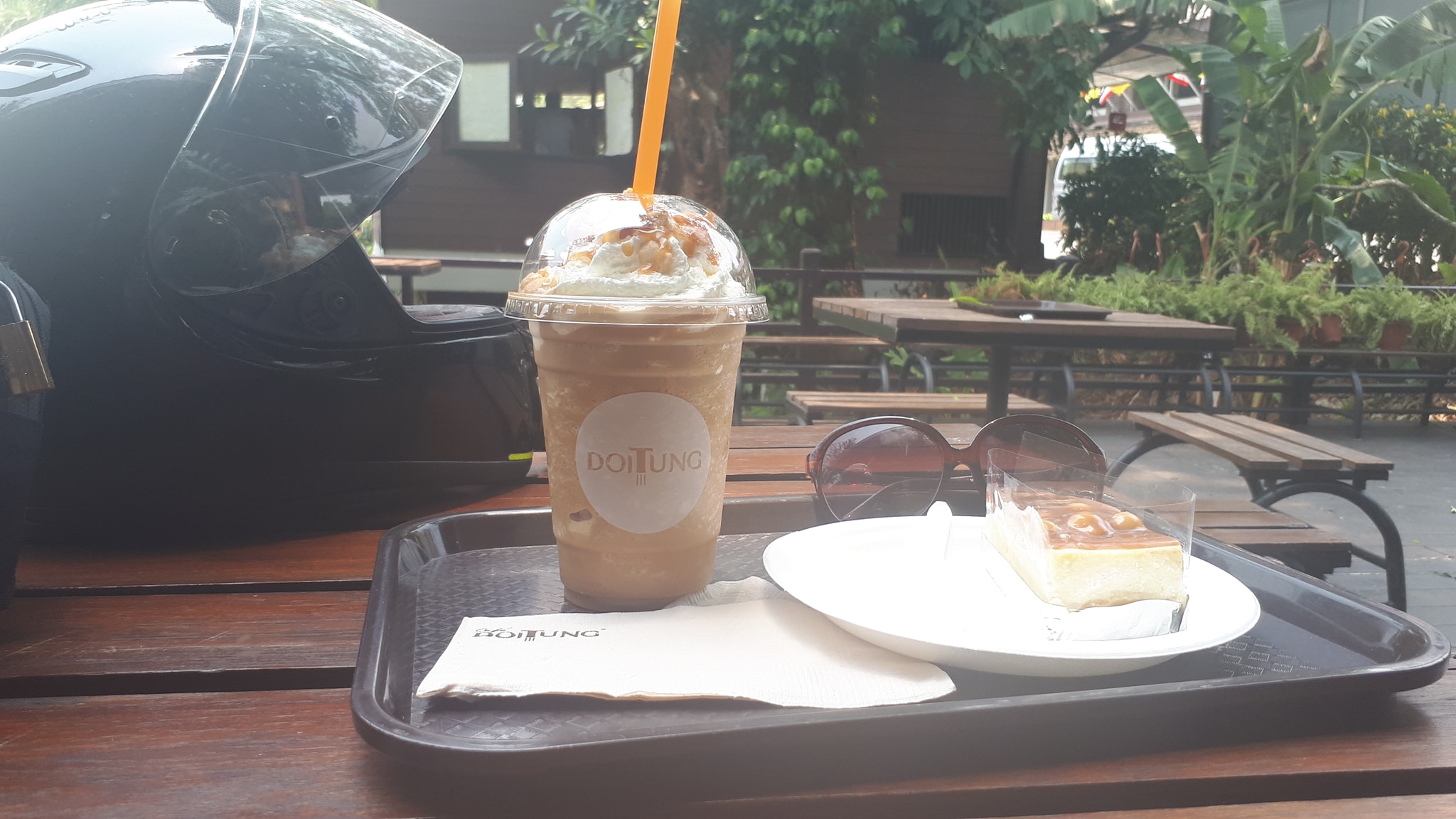 I stayed a while at the coffee shop and got myself a bit of a wash/clean up in the public restrooms. I was beginning to feel the heat building up. The time was just after 12 midday.

I continued along the 1378 and onto Doi Mae Salong. By the time I got there I was really beginning to feel the effects of not having slept the night before, but it came in waves. 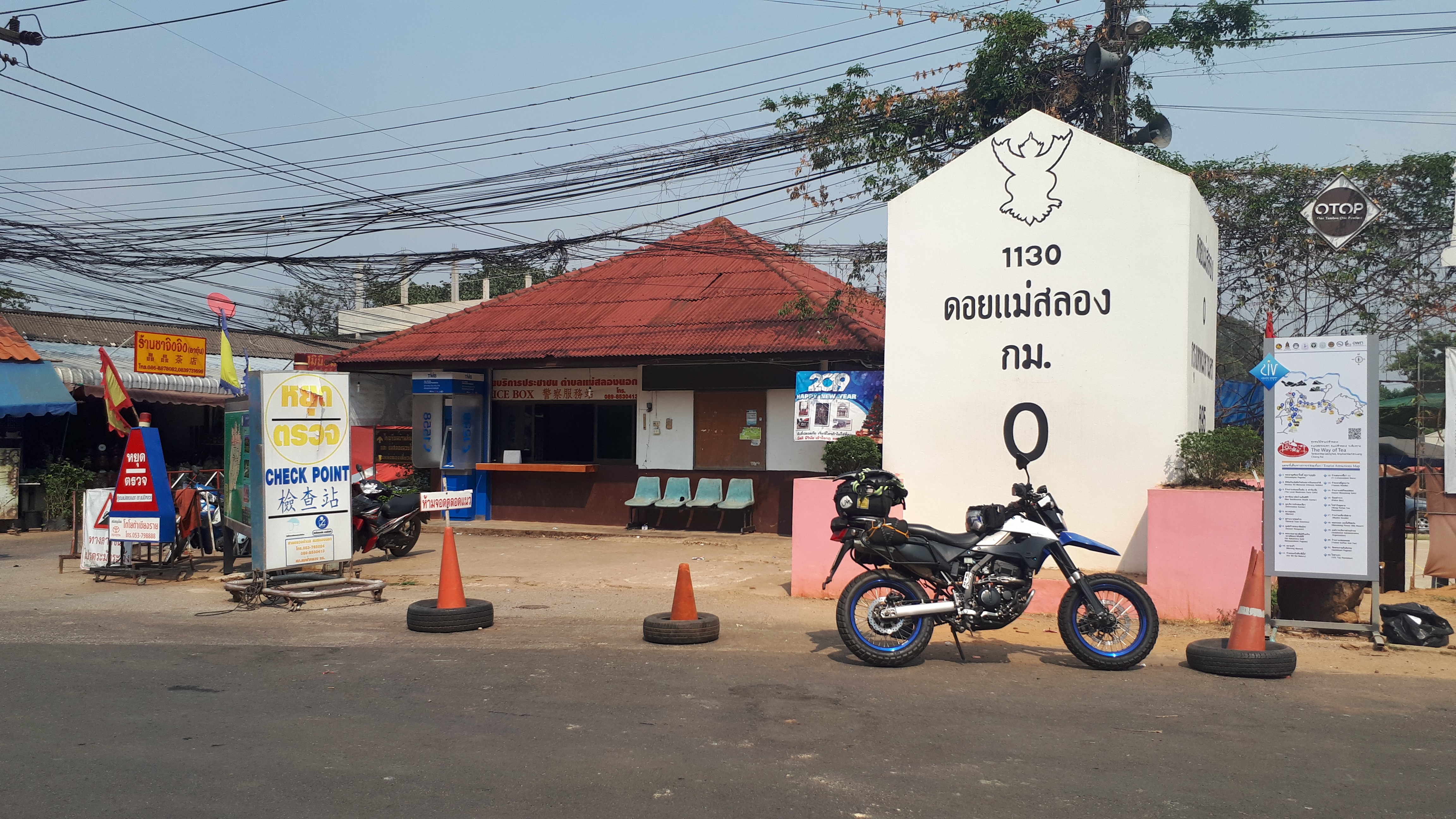 I took a small rest to ponder if i should carry on or not, but adrenaline kicked in again and I was happy to get going. I even got myself a hitchhiker for company. 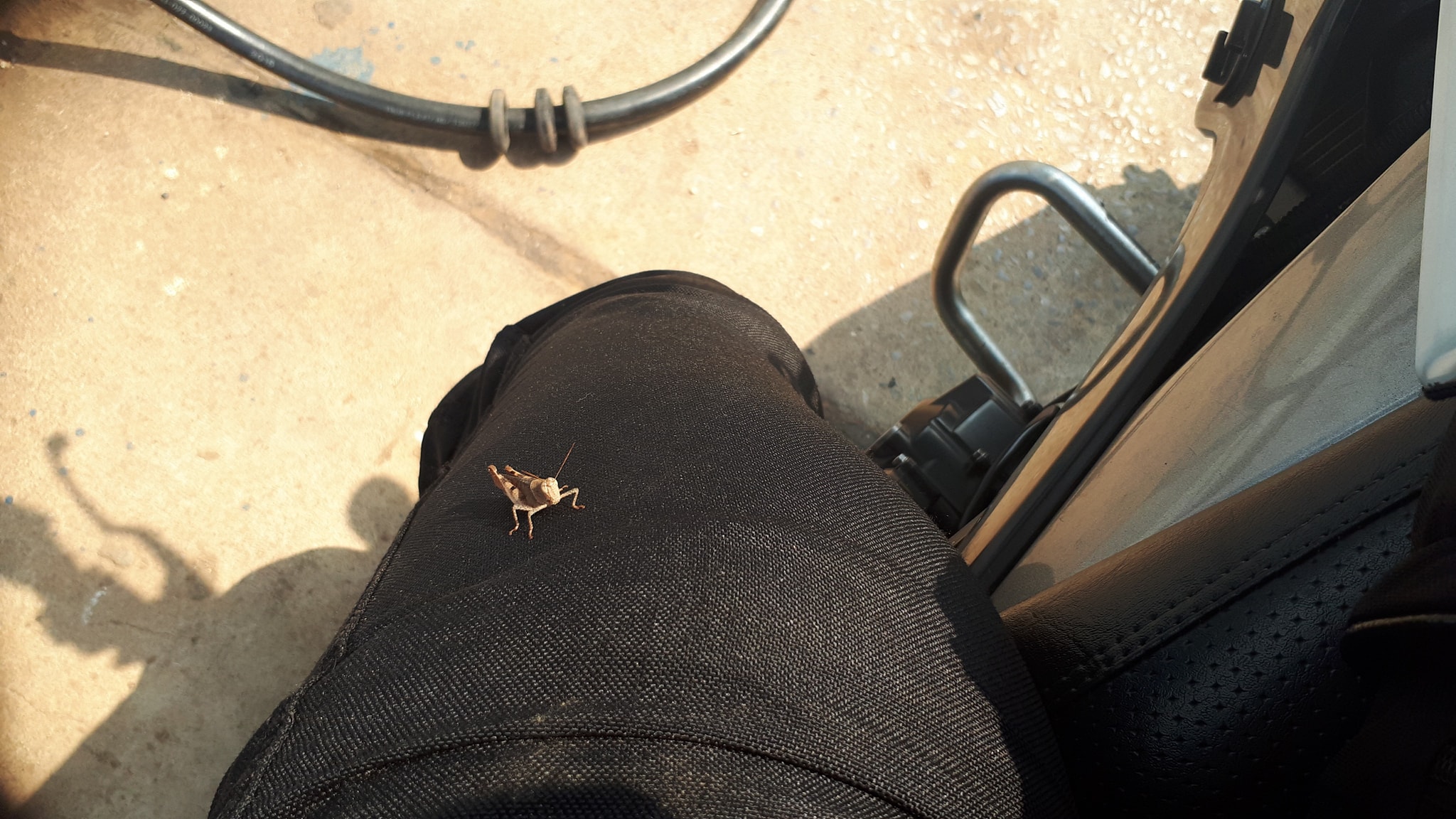 One thing that was VERY important to me at this time was to stay properly hydrated and to keep my core body temperature down. Coconut water works wonders and of course my camelbak water bladder. Then i tend to soak myself down and ride wet. But what I was really looking forward to was some river area to soak in. So i decided to have a bit of a wander to find a nice cool river.

After my soak I bumped into a few ladies (and one man) who were preparing food which they had gathered from around the local area. They went down to the river where they had set up some traps for catching fish. I confess I may have even disturbed some of their traps without realising, when I went to soak.

As is always the hospitality of local people, they very kindly offered me to eat with them. So nice!

Back on the road I headed towards Fang, stopping in at the fantastic Mae Ai statues.
No matter how many times I see these statues, I am always impressed.

Then, just a few km’s down from the statues I stopped in for a cool (soft) drink at Hom Pan Din Vineyard. I have yet to try their wine. 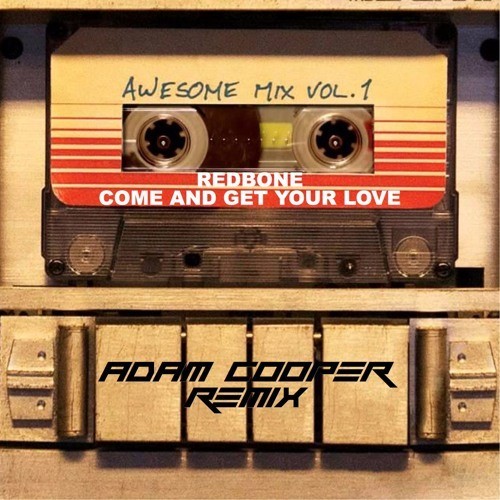 Had a bit of a fun moment at one point on the R107 Fang bypass road, which is a huge stretch of straight boring road.

To relieve the boredom factor and knowing there was little risk concentration-wise, I played the soundtrack to Guardians of the Galaxy.

My favourite song being “Come Get Your Love”, by Redbone.

My body was stiff so i also figured it would be a good opportunity to move about, and so I started bike/seat dancing. I really starting getting into it and enjoying myself, not

really caring if anyone thought I was a nutter or not.

Ah-hah, however, the bonus factor was that everyone who passed broke into smiles or laughs or even friendly shout outs.

Hot day. Long boring stretch of road. I made myself happy..and it would seem I made others happy too

En-route back I spotted a fire raging: 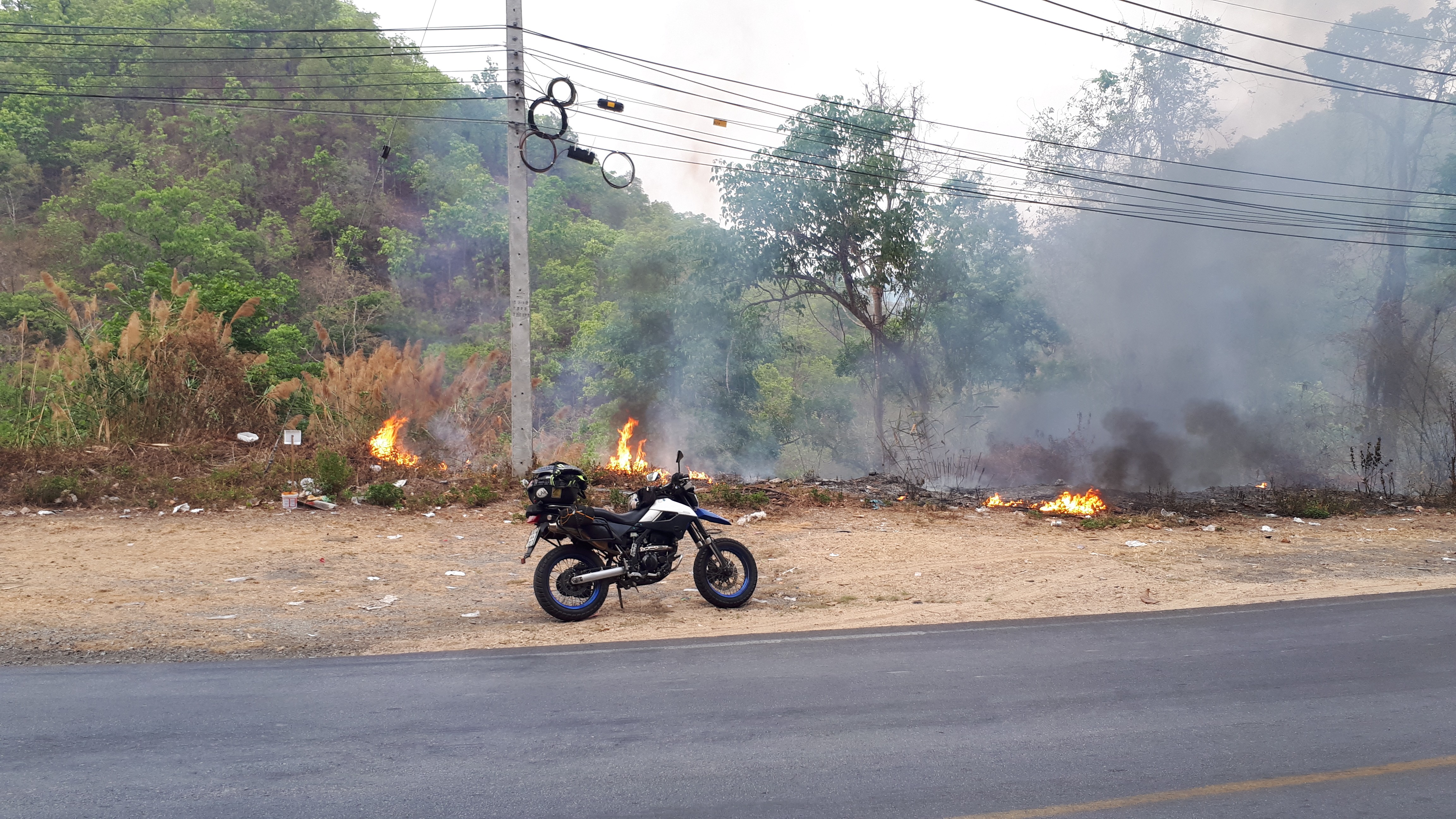 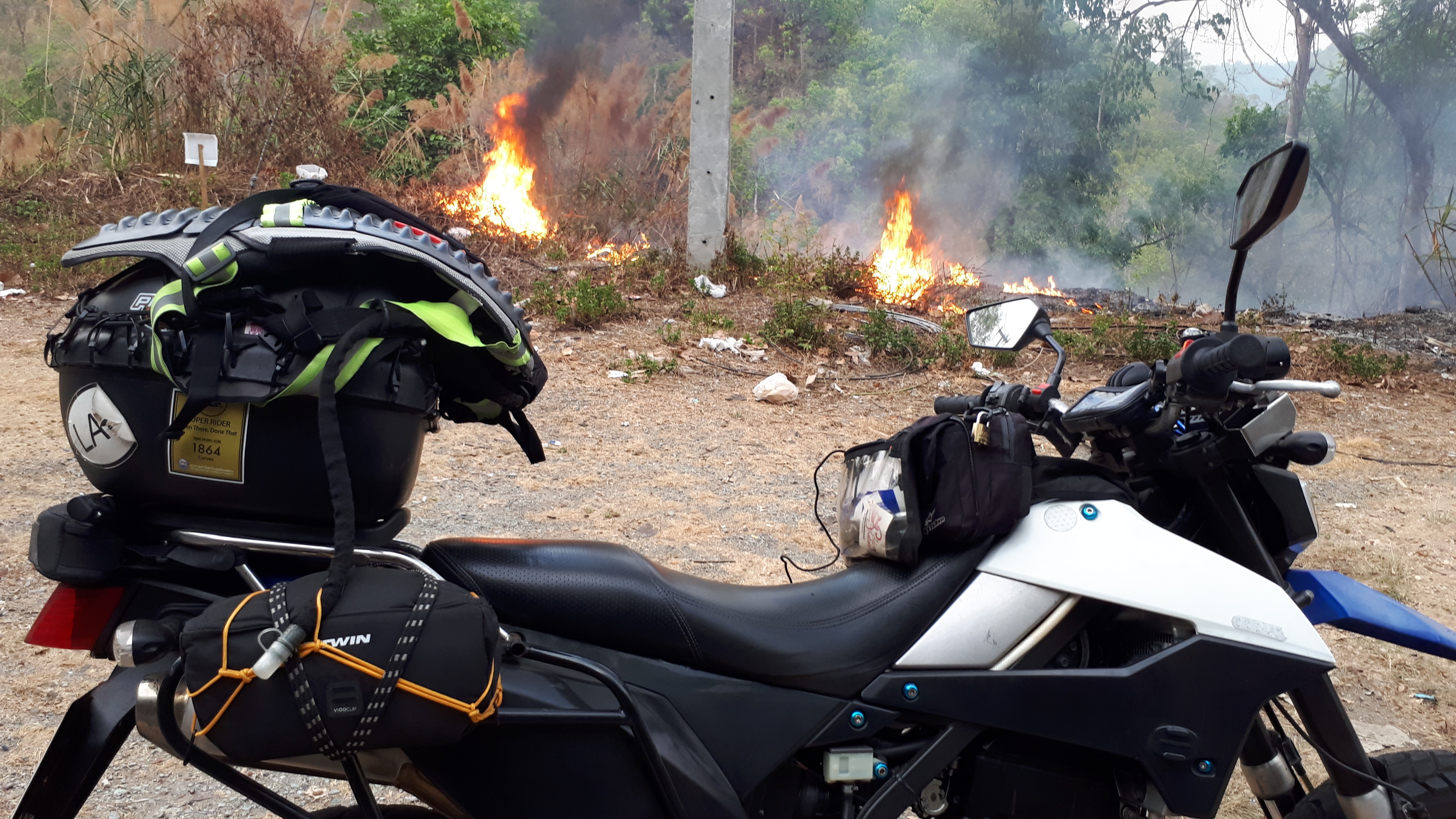 If you want to know more about the haze and why these fires happen, I have a write-up HERE (which i will update for 2019 soon).

By the time I reached Chiang Dao the sun was beginning to set (around 5:45pm). I took a couple of photos of the beautiful and distinctive Chiang Dao mountain before fueling up for the last time at the local garage (where I also had another soak down). 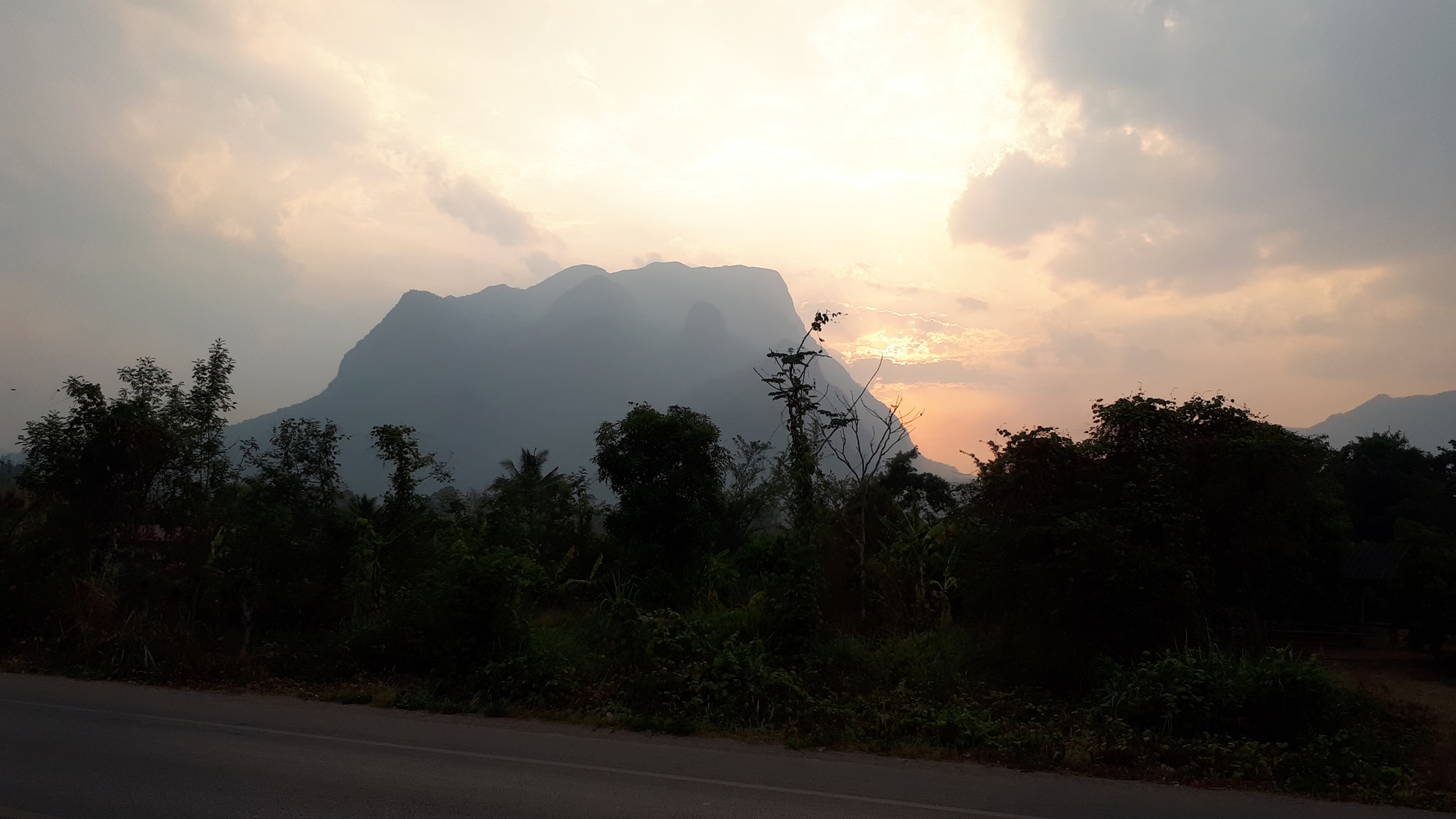 Was a great day of riding! 🙂

Hope you enjoyed this trip report.
If you did, please comment below.. and don’t forget to subscribe ^.^