*NOTE* For a full route map and download link for a Garmin route go to Ally Taylor’s webpage.
Many thanks to Ally for linking me to her website a year ago in order for me to (eventually) find this route. Her guide is from 2010.
There is also a .kml file you can download from HERE (from NT.Trail Guide)

Previously I attempted to do this route and could not find it! It resulted in a rather frustrating day, which you can read about if interested:”Ten Hours of Riding When the Villagers Give you the Runaround“. Feel a little sheepish about that title now, because it turns out the locals were in fact correct, just that the turn off was so hidden. 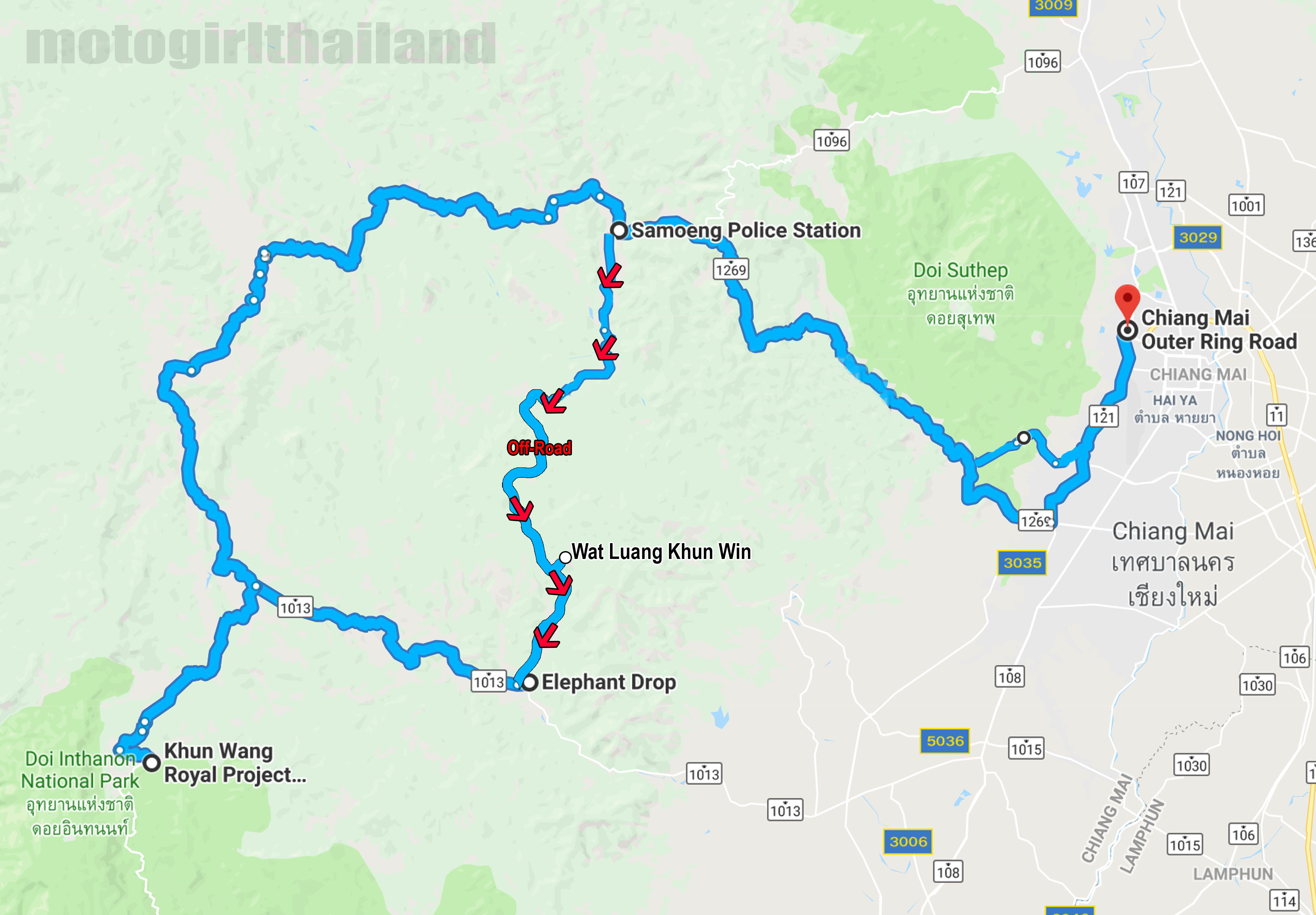 I had a riding companion with me on this day (they prefer to be left out of the trip report). I generally prefer riding solo but the opportunity came up and as I am not yet strong off-road it made sense to be riding with someone. Thankfully it still felt like a day of solo concentration, even though someone else was around. I think I would have been ok solo though (the solo ride to Huamereng on dirt gave me more confidence), but the general recommendation is to ride else with someone when tackling dirt.
Anyway, onto the report.

Stopped in at a coffee shop in Samoeng village first to fuel up on caffeine. 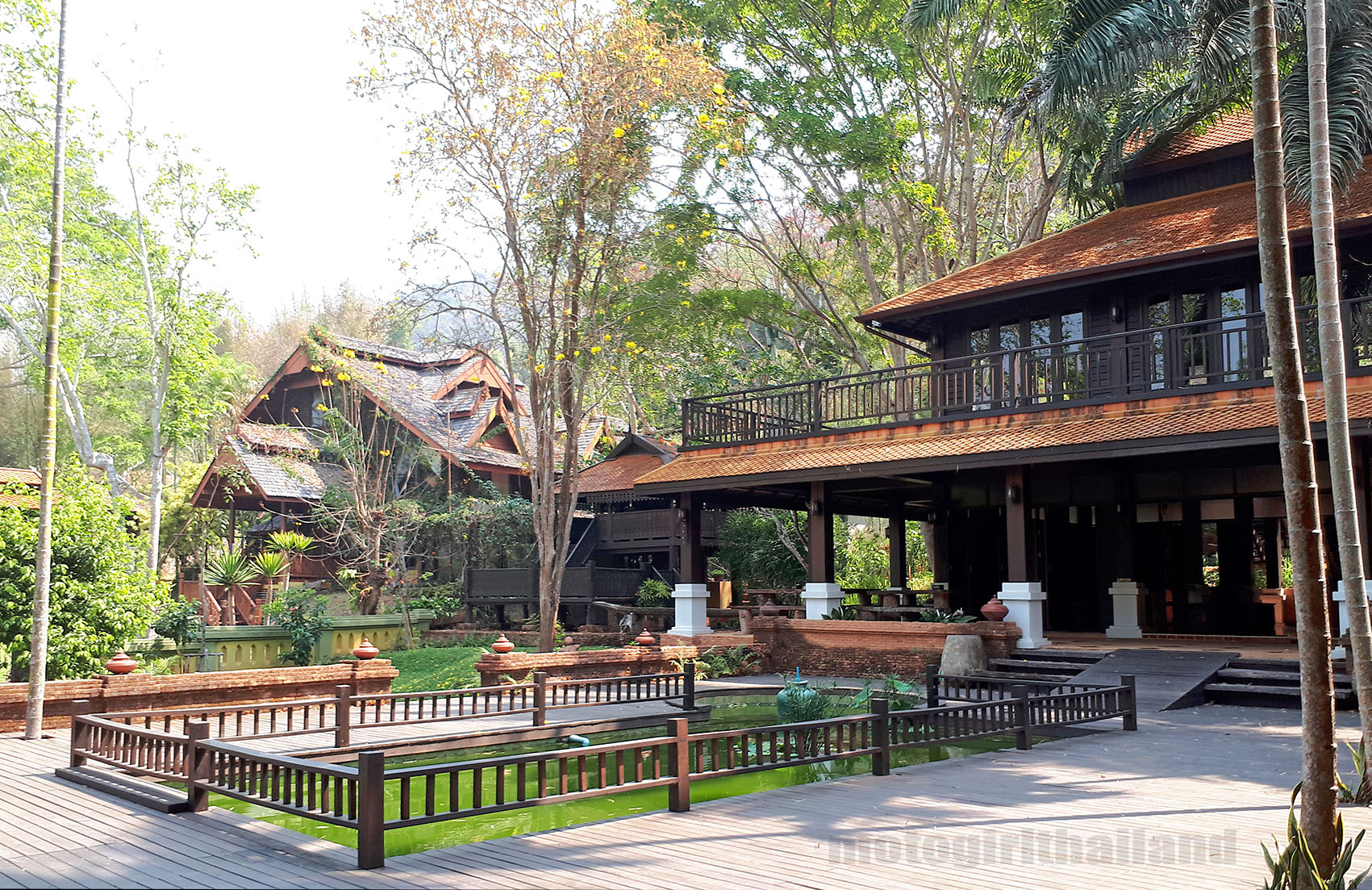 As I was leaving I noticed a bunch of off-road riders arriving at the coffee shop. I figured they might be heading up the same track later.

After the caffeine fix it was time to set of to find the dirt track that would lead to Mae Win (and Wat Luang Khun Win).

First point of reference was the main bridge into the rural village area (Google Map link)
I crossed over and headed along the track to the second reference point of a red old British style phone box (Google Map link). I took a left at the phone box. Initially I went right past the entry point for the ride to Mae Win, but turned back on myself and found it.

Deja Vu….
If, like me, you reach this distinct dead end, then turn back around on yourself. (This was the same dead-end that I reached last time. Had a strong feeling of deja vu.) 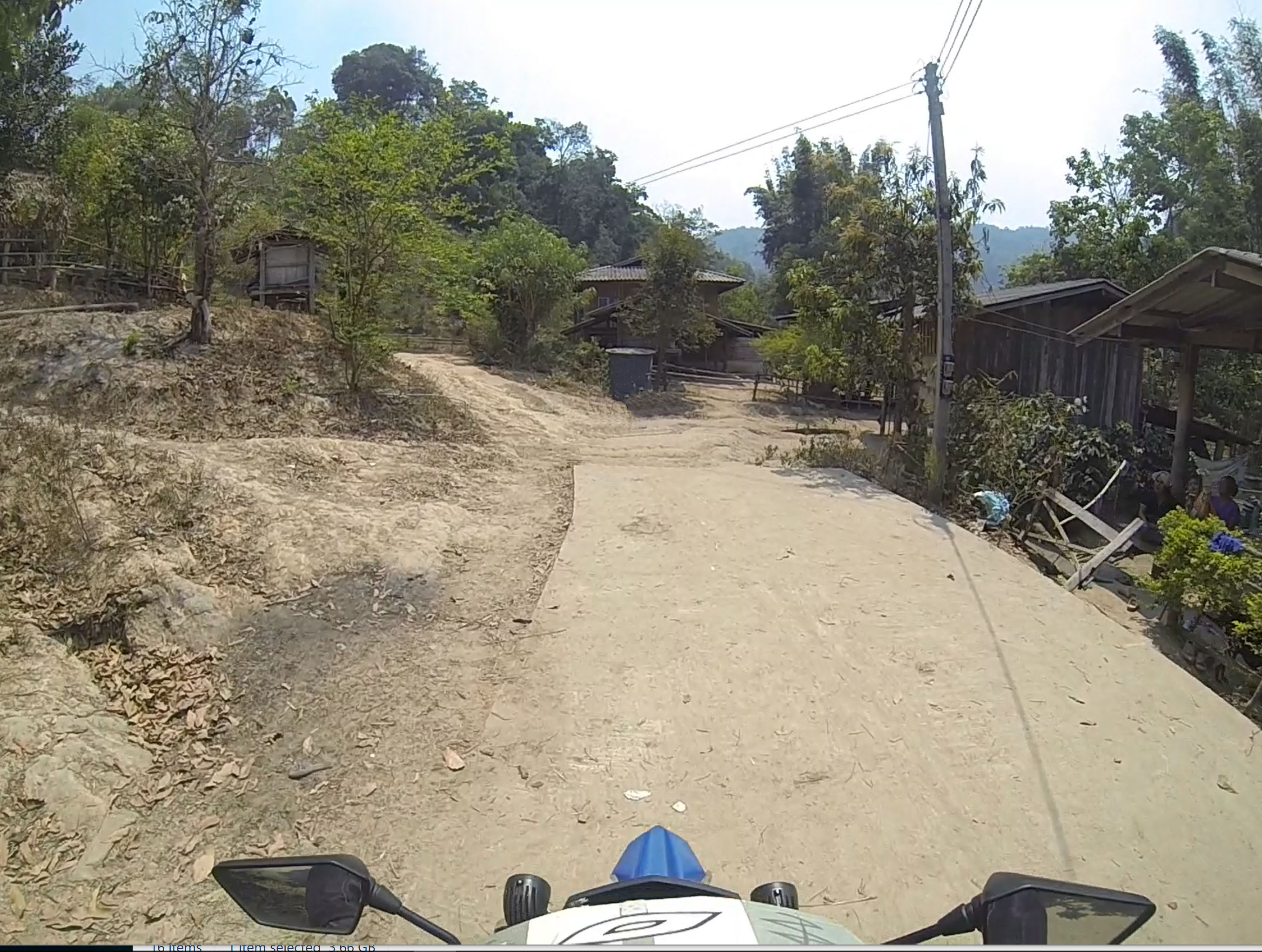 Between the phone box and this dead end is the turn off for the route to Mae Win. It is just very hard to know it is the route as it merely looks like a road to a small village. For sure finding the route from the Mae Win side is MUCH clearer.

This is the actual turning to take (so easy to pass it by!) 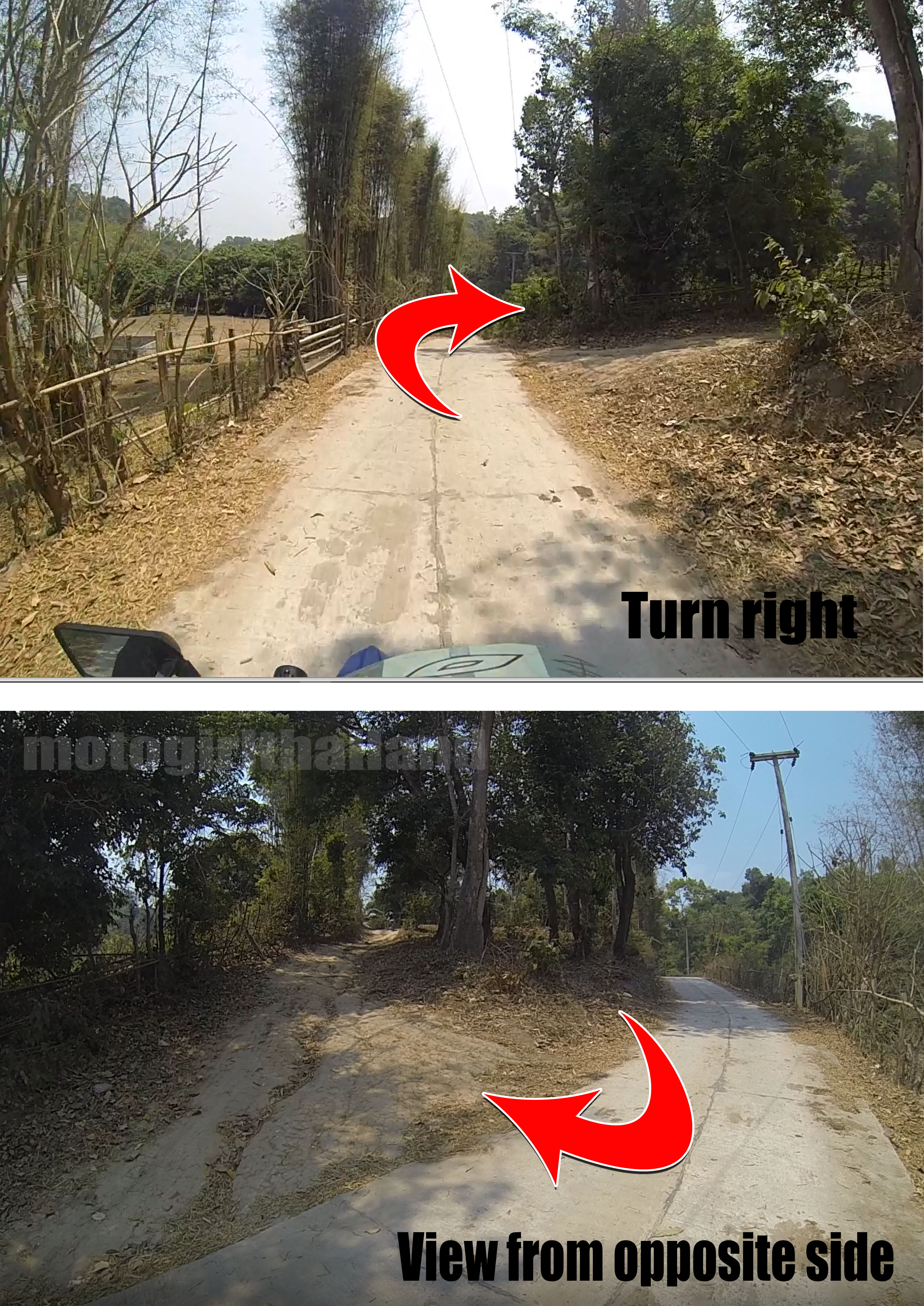 Head up the track and turn left. 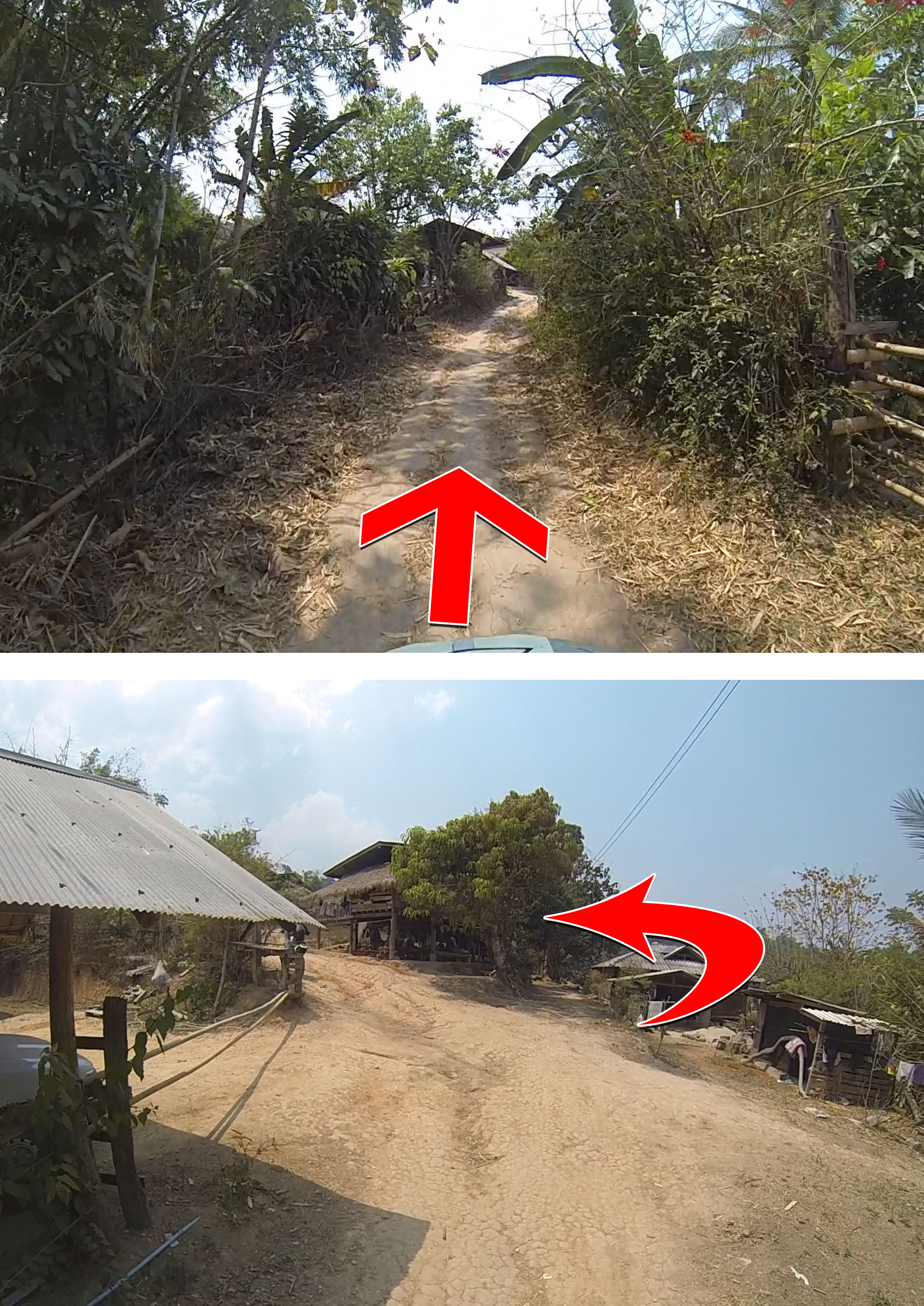 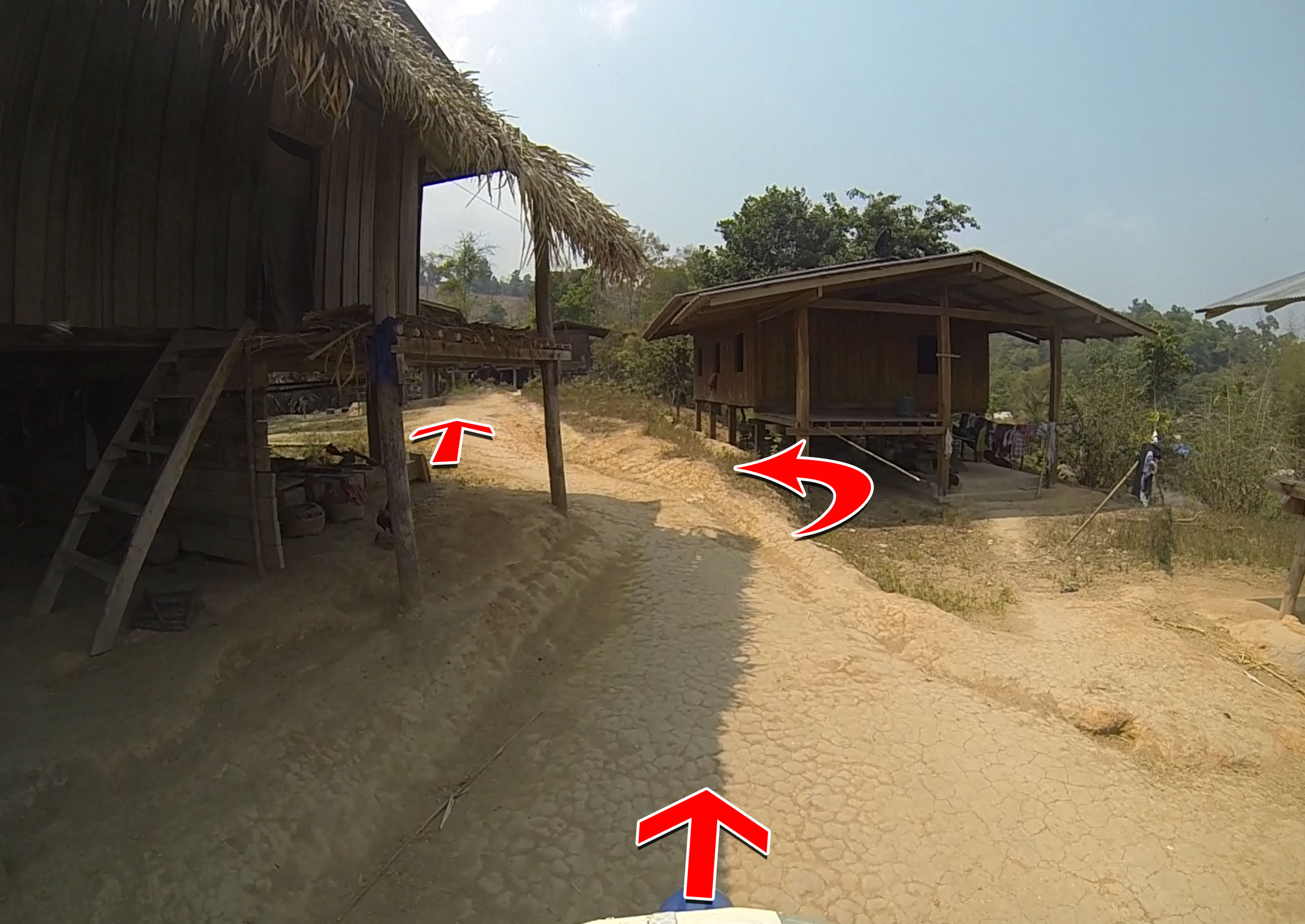 After this point the route is fairly clear. Just have to keep going forward through the twisty dirt tracks and village areas. Keep straight on.

Here is a video of how the terrain looks during this time (Hot Season, with everything fairly dry and dusty).

A funny ‘small world’ moment came about at around 5 minutes into the ride. A group of Enduro/Off-road riders were suddenly behind me (the same ones that I had seen earlier arriving at the coffee shop in Samoeng). Suddenly I heard my name being called out and when I turned around to look it was Alan Pratt from Thai Bike Tours taking a tour out! 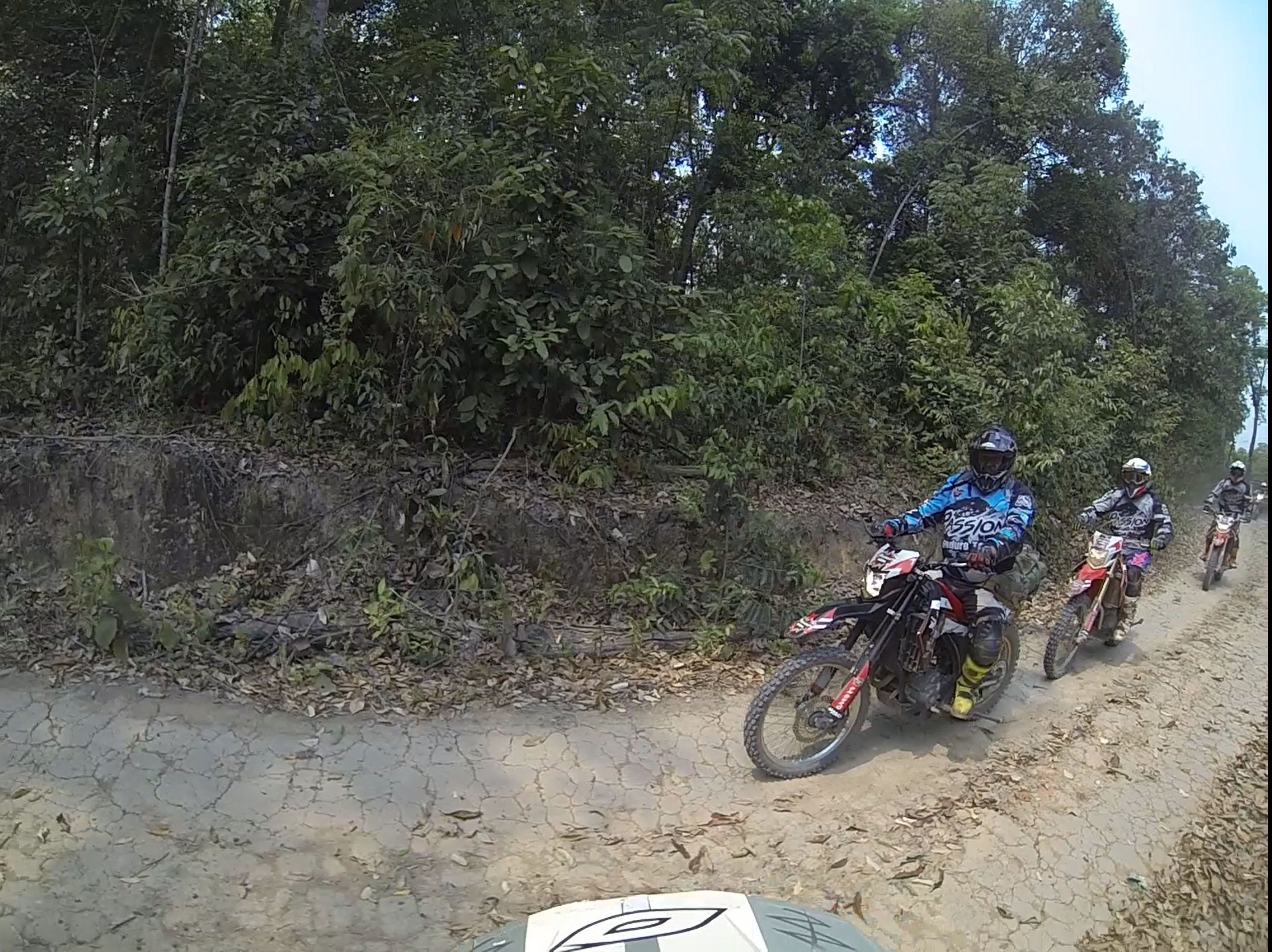 We stopped and had a chat, and then they took off (faster than my pace). 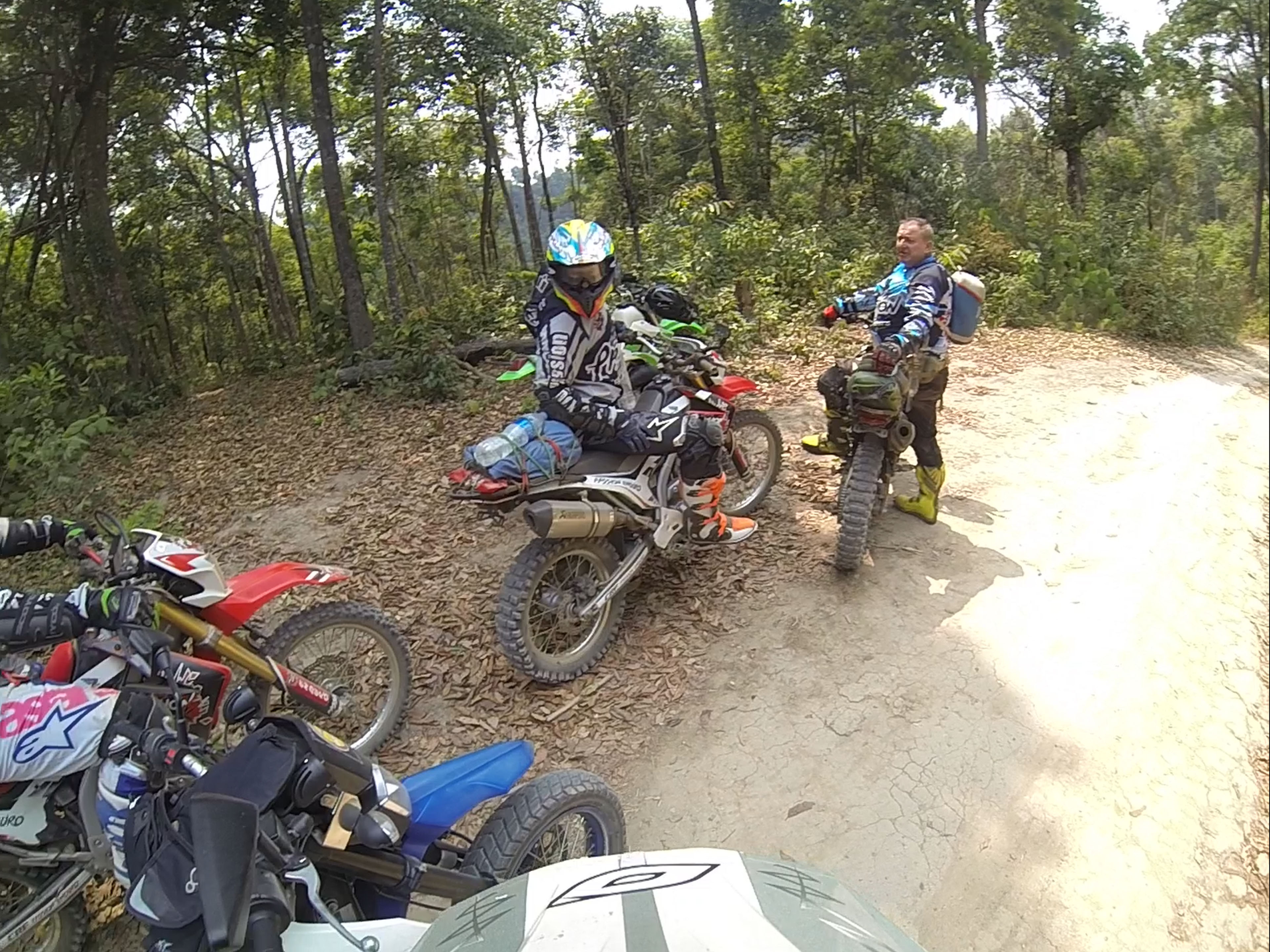 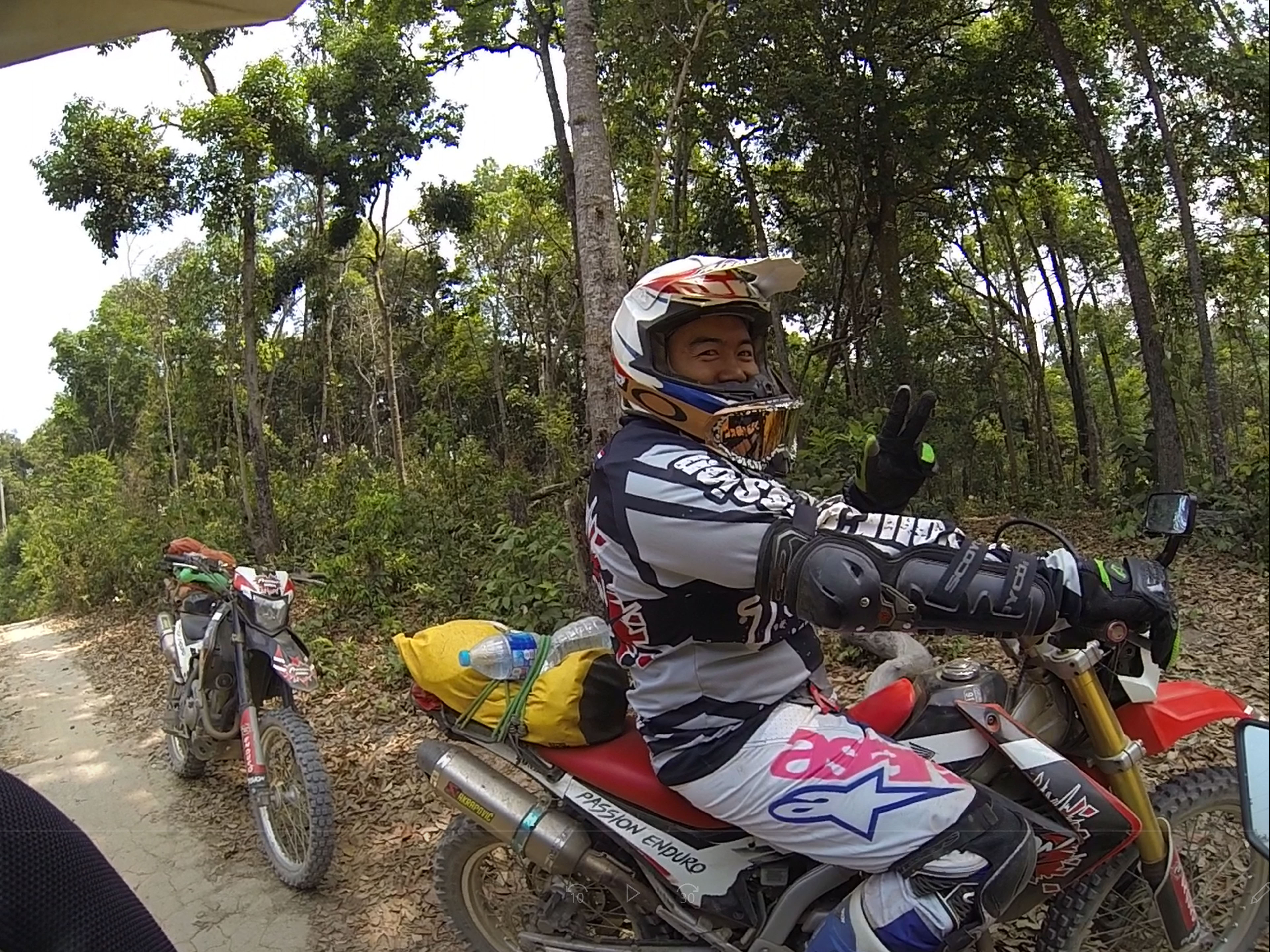 Nearing the end of the ride a distinct left turn was noticeable in the middle of nowhere, indicating the temple road. There was also a sign for Wat Luang Mae Win (but facing the opposite side of the road). 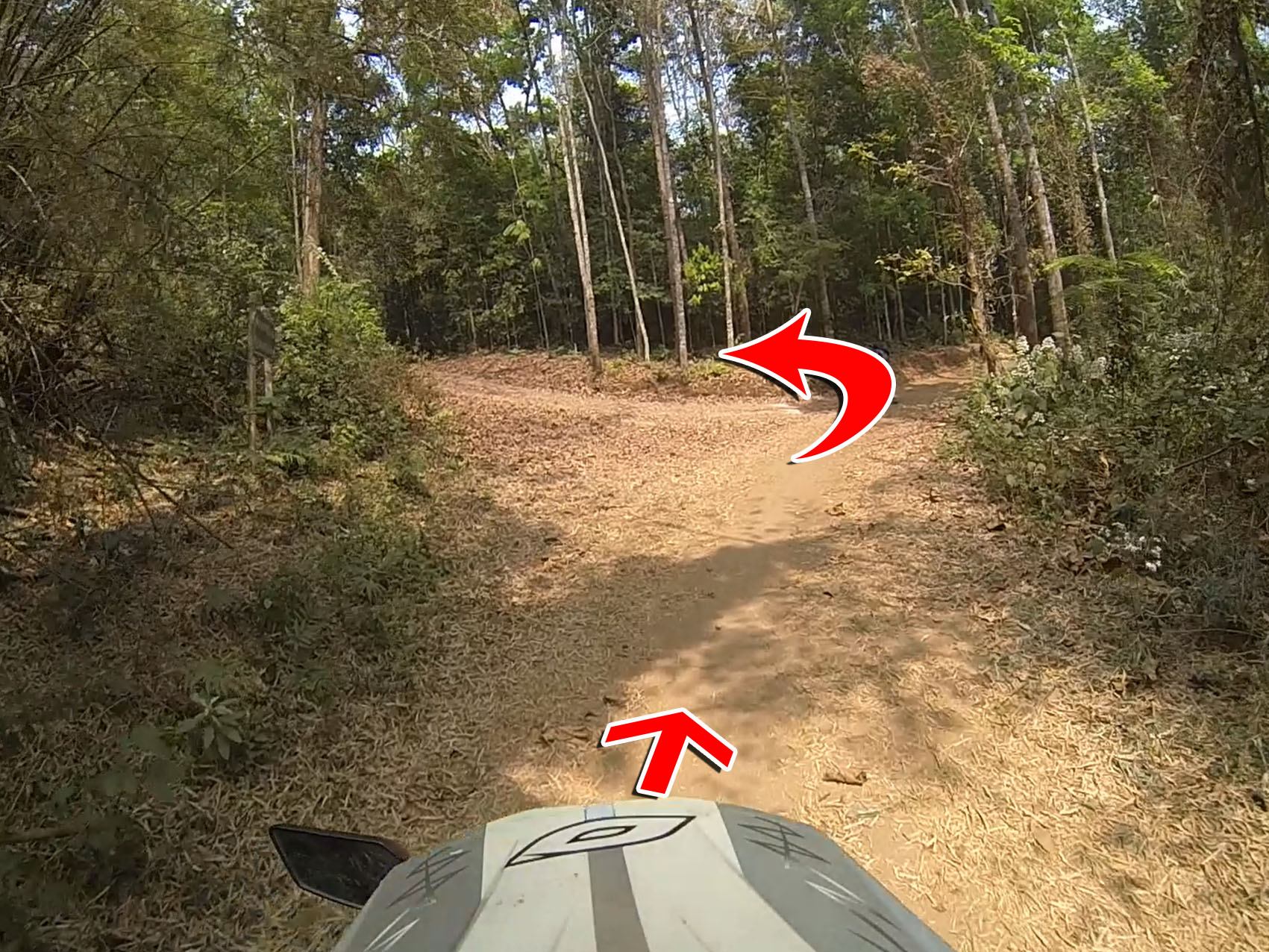 Well worth the small detour. The temple is stunning. A pristine area and a real contrast to the surrounding dirt and dust. The temple grounds are beautifully kept and the temple(s) themselves are amazing teak wood structures with amazing carved teak wood Buddhas. 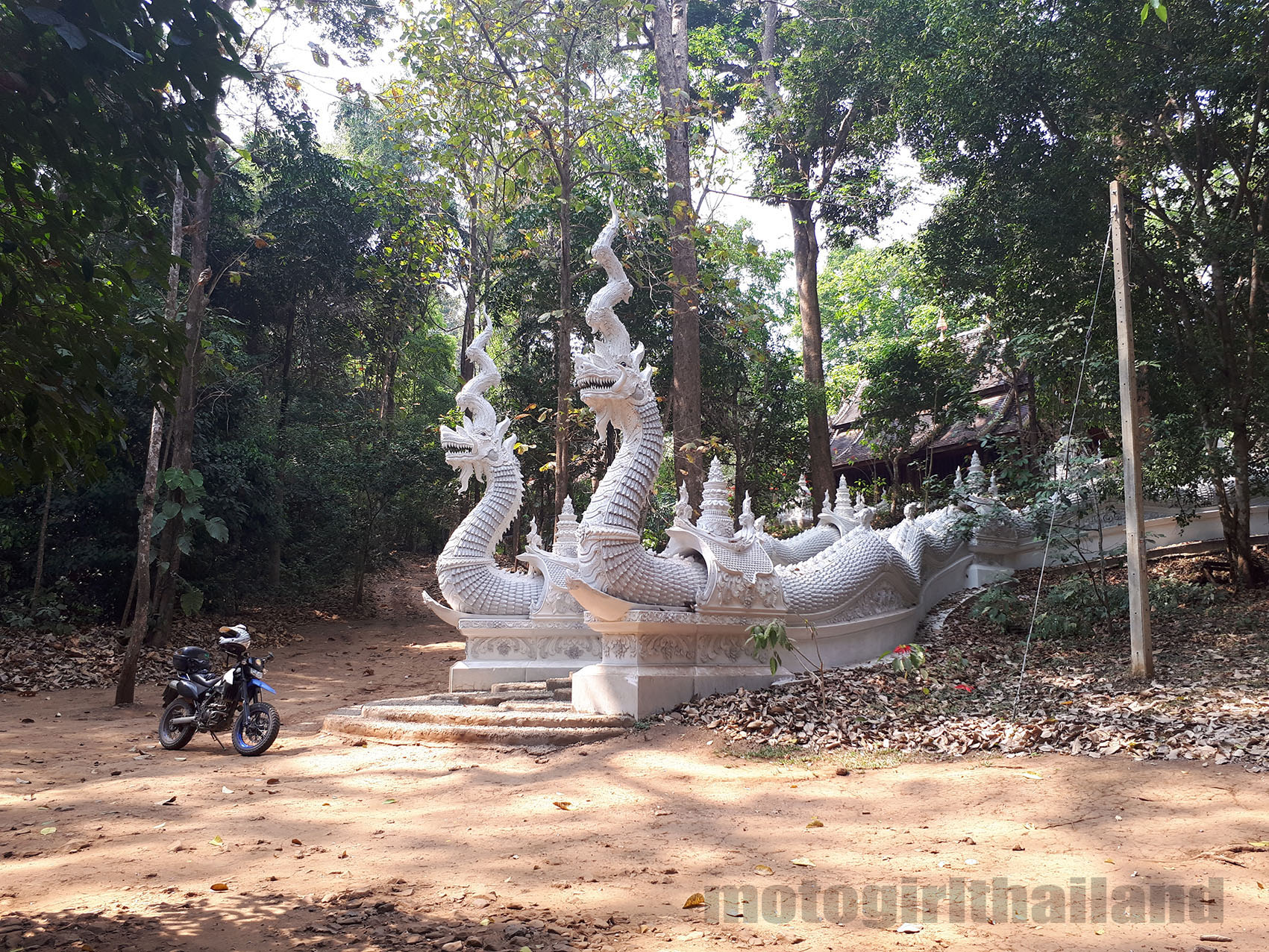 Heading back to the track I noticed intermittent construction work on the route. It would seem the Mae Win to Wat Luang Mae Win may become road and be more accessible in future. Could be some time away though. 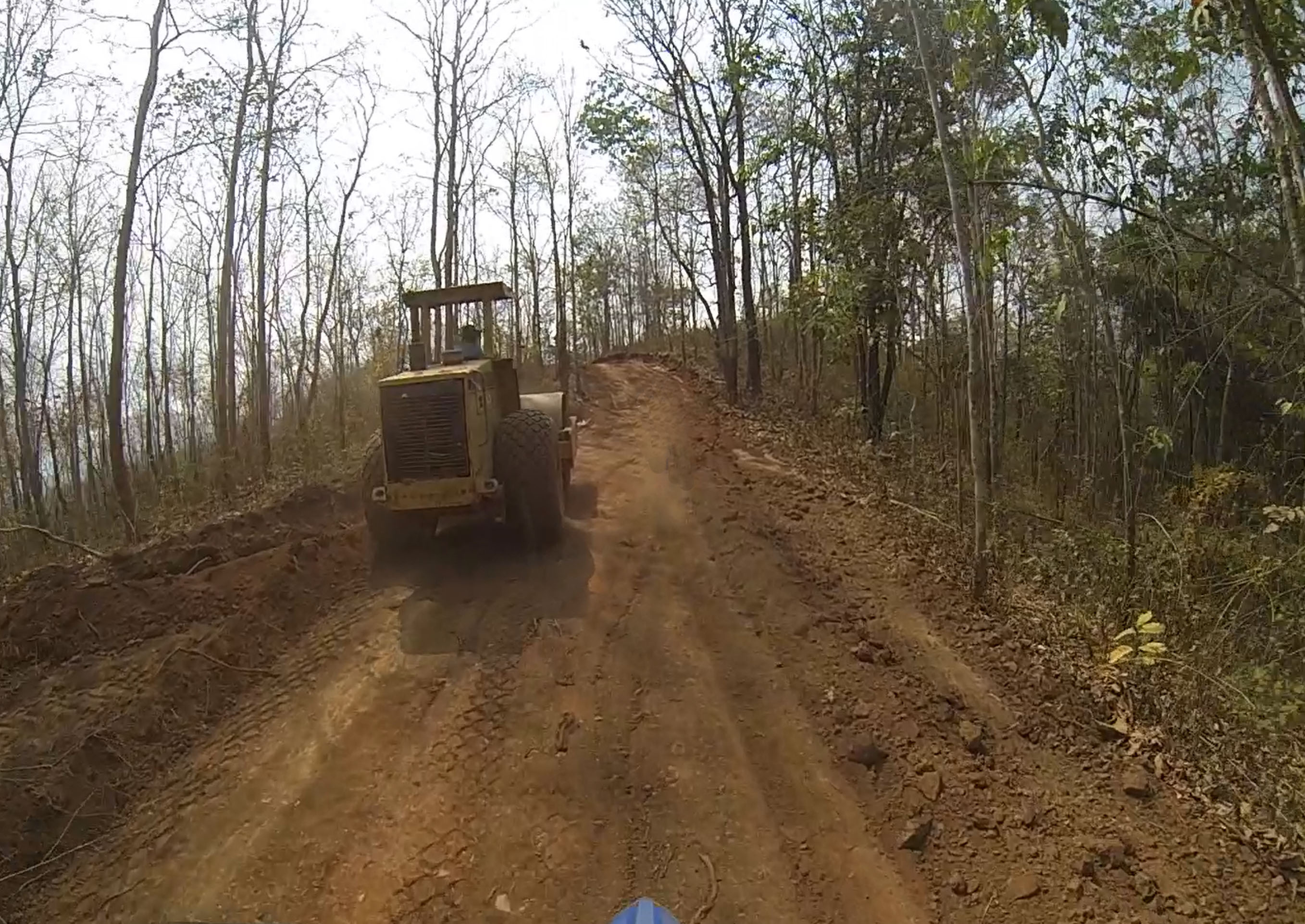 This did make for some very soft and squishy dusty earth though, and had myself a small hiccup… 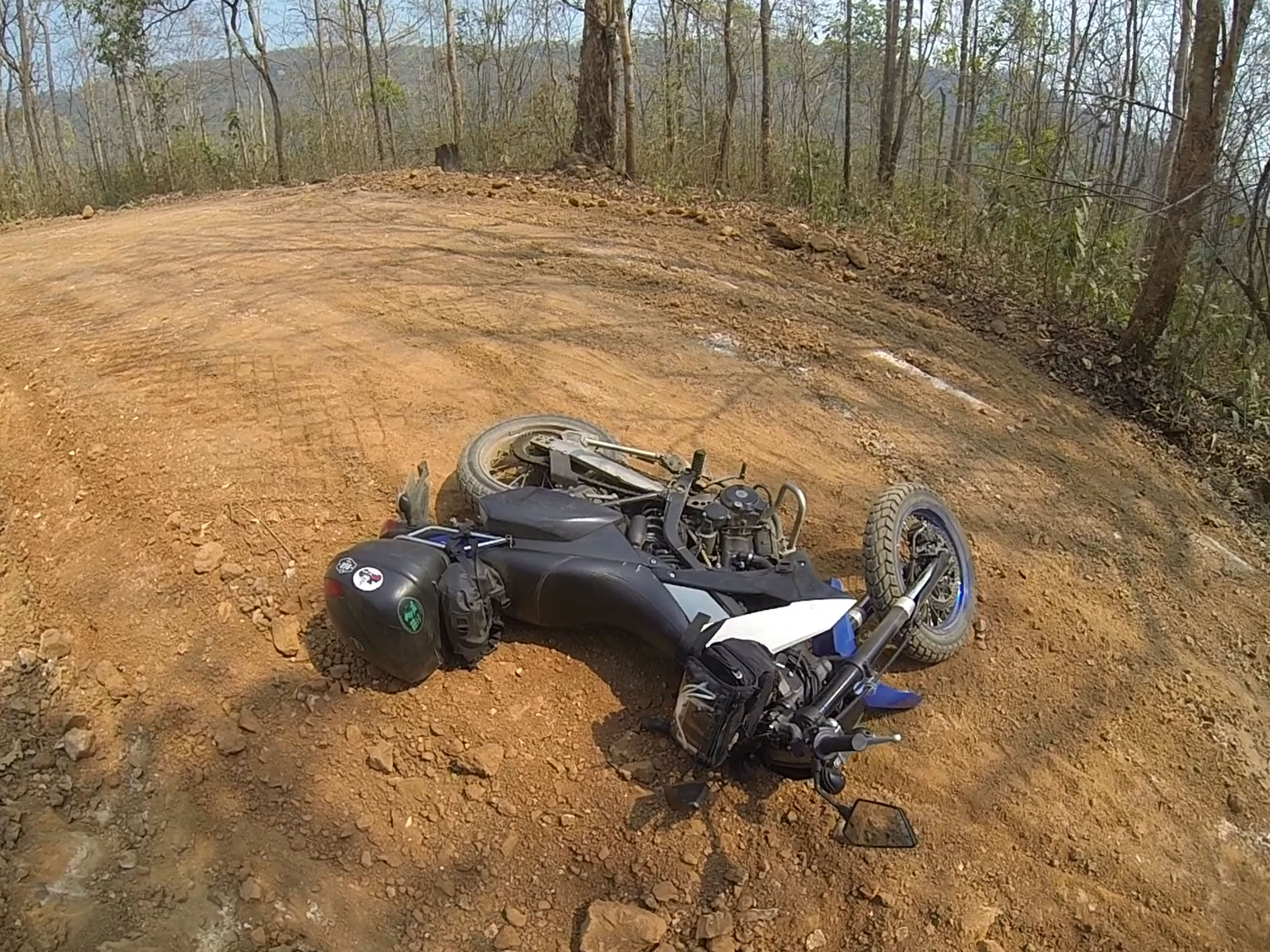 No issues though and all good (aside from a nice big bruise coming up above my knee, that is).

The other issue is a lot of gravel on a very smooth concrete surface. So when going downhill I found I was sliding at times on the gravel, which was a little scary. Falling in dirt is one thing, falling on concrete, another. I didnt fancy a fall on it. Thankfully was fine.

On the Mae Win side you will come out at the Karen Eco Lodge and from there is is solid road.

Hungry and a little tired from the heat and concentration, the next destination was a place to eat. The weird thing is that every place around there appeared to be closed! Not sure what was going on really. Not sure if this is normal or just off-season etc. 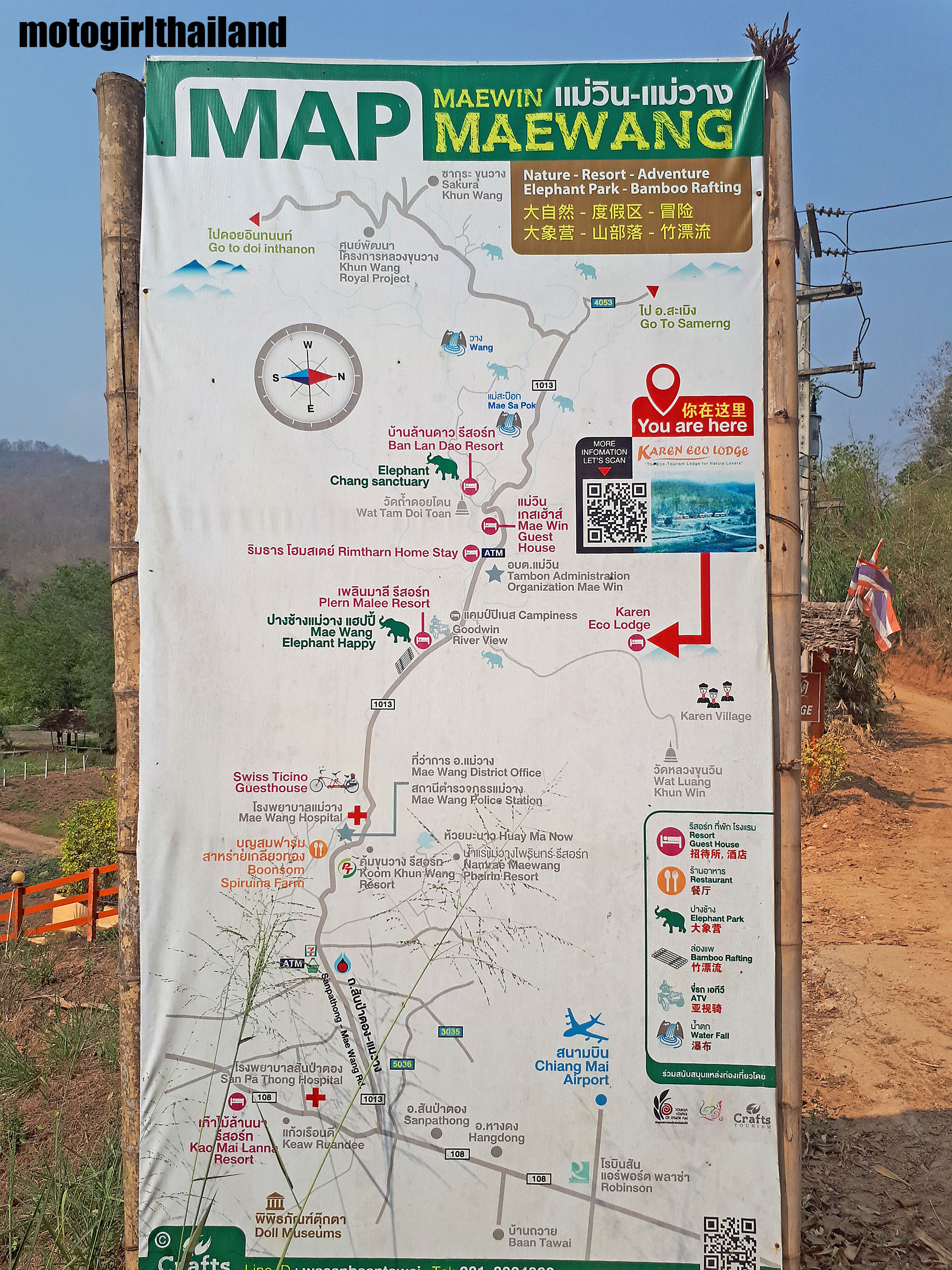 Decided to follow the Mae Wang map above, and head to one of the resorts. Yet seemed most of all these places were either shut or just coffee shops. Even headed up to the OTOP, but turned out to be just a coffee shop.

So instead decided to head off on the 4053 and just see what pops up on the way (which pretty much turned out to be nothing).

On the 4053 I had a real heart stopping moment. A pickup truck in front of me nearly collided with a large HGV coming down the other side (these roads are very narrow and twisty).
The pickup truck decided to reverse back and the front of my bike began to get swallowed up/crushed by the pickup. I was preparing myself to jump off my bike and leg it. Visions of my bike crumbling (or worse me) permeated my mind.
Thankfully the HGV vehicle saw this happen and shouted out to the pickup driver, who stopped reversing. The reason the pickup driver couldn’t see me is that his whole back window was replaced by a piece of solid wood!
My riding companion by this time had ridden into the gully along side the truck and was kicking the drivers door in fury. In shock I gently eased the front of my bike from under the back of the pickup and reversed back.
The pickup and the HGV vehicle navigated past each other and the pickup driver pulled over to talk. I was shaking like a leaf and couldn’t work out if there was any damage to the bike as i couldn’t think straight. Got my riding companion to test out the bike and the verdict was all is ok (just some scratches on the front wheel guard where it bent down).
The driver was already on the phone to the insurance company but i told him it is ok. Instead we had a chat about his window and he apologised. He held out his hand for me to shake, and I did. I think that in this case I just didn’t want any drama. Hopefully he learned something from this…but likely not. I have my own lessons i learned and just glad all was ok. So will leave it at that.
Unfortunately no GoPro on at this point. Which is a touch annoying. I joked that if I am going to die I at least want it caught on camera. Morbid..but actually true…

After a short sit down to calm my frazzled nerves I got back on the bike and headed back along the 4053 to Chiang Mai, and to hopefully seek out some food. (I am annoyed at myself as I did plan on buying some bakery products “just in case” and forgot. If you take the same route as me, best if you pack a snack or two, as seems food places are lacking. I did actually spot a couple of places that might have served food, but were so grubby looking and fly infested that I decided to hold out for a better option).

Some time later we eventually reached Samoeng, and the only proper food place was closed up for the day. The sun was beginning to set so the decision was just to high tail it back to Chiang Mai and eat at a favorite restaurant there. By this point eating and then getting home in the dark when feeling weary just seemed like a bad idea. Better to just get back to Chiang Mai and relax with some good food.

Was a weary ride back and not so much “high tail” in the end, but did end up at a great restaurant and the food tasted doubly good due to raging hunger.

All in all a fantastic trip, with a few lessons learned allong the way.

A brilliant off-road ride for many at this time too, due to the dirt being so dry and solid (if, like me you prefer this to the sludge and wet. Maybe in time I will learn to appreciate mud more, but at this stage im happy for dry and dusty). 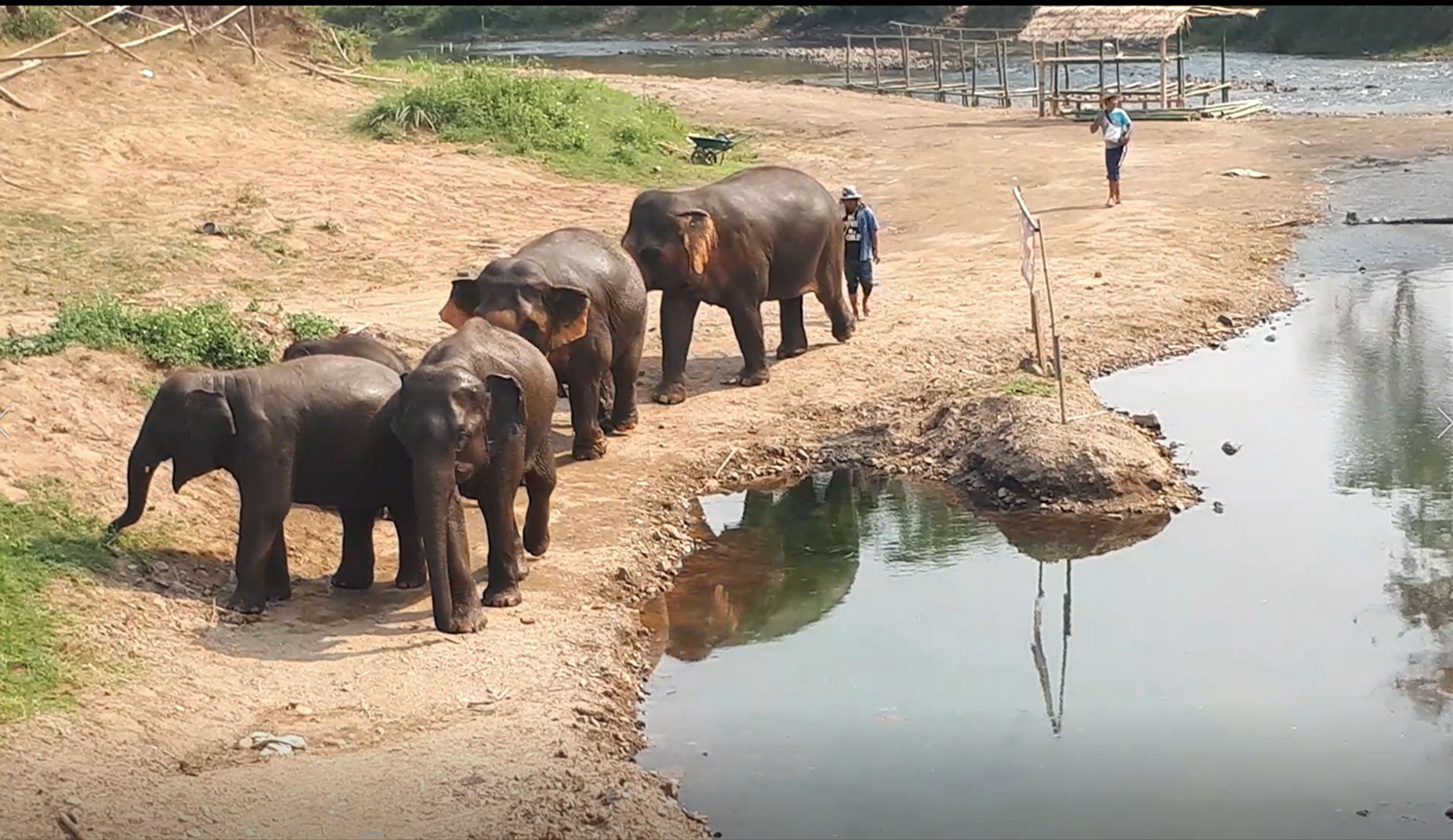 Hope you enjoyed this trip report.
If you did, then please subscribe! 😉 😀