Nicknamed “The Roof of Thailand“, Doi Inthanon National Park is part the Chiang Mai province of northern Thailand and part of the Himalayan mountain range. The park covers an area of 482 km² with elevation ranges between 800 and 2565 meters, with the highest peak at Doi Inthanon, making it the highest mountain in Thailand. Due to the high altitude the park has cold weather and high humidity all year round, with the average daily temperatures around 10-12°C. The park is host to a variety of flora and fauna, and is a top spot for bird-watching (with over 300 varieties of bird life). With its spectacular waterfalls, nature rich walking trails, and ancient hill tribe villages, Doi Inthanon is a must see national park in Northern Thailand.

Getting there
From Chiang Mai city head south on the 118 towards Mae Sariang. Approximately 60km along the 118 you will see a turn off for Doi Inthanon (route 1009) on the right hand side.
This route will take you through mountain ranges and checkpoints with the main entrance point to the national park at around 8km in.

Yes, two tiered pricing rates…
“Correct documents” are really hit and miss and often depends upon the mood of the person manning the ticket booth. If you are a foreign national holding a work permit, pink ID, tabian baan (house book), or a combination of any or all of them, you may get the local rate. Try your luck for the local rate, but go expecting to pay full foreigner rate.

There are several waterfalls within the national park but I am focusing on four of the most popular ones, consisting of Mae Klang Waterfall (100 meters), Mae Ya Waterfall (250m high – the highest waterfall in the park), Wachirathan Falls (100m high) and Sirithan Waterfall (50m high).

Close to the park headquarters, within Khun Klang village. The project was developed in 1979 to help train hill tribe communities in modern agricultural practices (and steer them away from cultivating opium). The resulting harvest of crops, plants and flowers could then be sold through the project.  The onsite flower breeding research lab and plantations are open to visitors.

Note: There are multiple Royal Projects around the whole of the country, which was set up by His Majesty King Bhumibol, who recently passed away, much to the sorrow of his countrymen. You can read more about his projects HERE 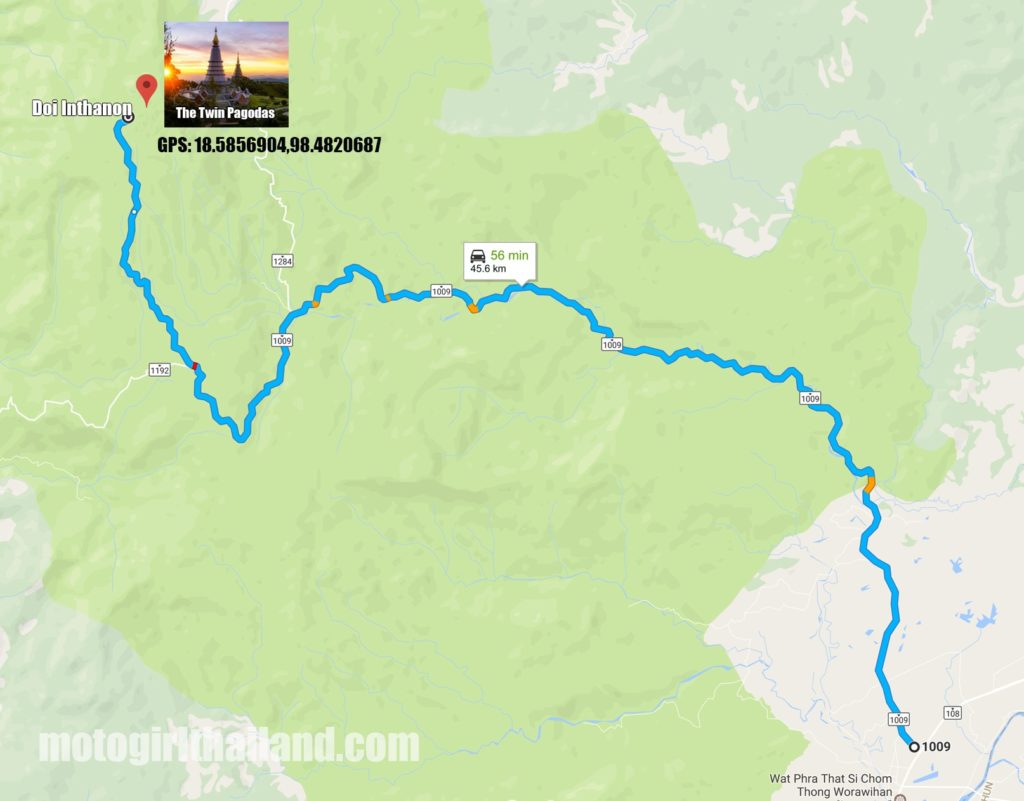 The twin pagodas (Phra Mahathat Napha Methanidon and Phra Mahathat Naphaphon Bhumisiri), are situated 100 meters from one another, and were built to commemorate the fifth cycle birthdays of the late King Bhumibol Adulyadej and Queen Sirikit.

The pagodas enshrine the Lord Buddha’s relics and include fine tiled murals and imagery of the Buddha. The views on a clear day are magnificent, but often obscured by cloud cover.

The peak of the park is very straight forward to reach and has plenty of signage and photo ops on the way and at the destination. The area is cool all year round so take something warm. You can also purchase warm drinks and food at the peak.

For centuries Doi Inthanon has been home to various hill tribes who continue to maintain their ancient way of life in the area. Much of what they cultivate can be purchased in the Royal Project shop in Khun Klang village.

At the base of the peak resides Hmong tribes, where the community continues to tend their fields in the same way they have done for hundreds of years. Their methods remain the same, however they now cultivate commercial crops such as vegetables and flowers, rather than the opium poppies they once tended. In the Hmong Village of Khun Ya Noi, you can visit the local market and admire the colourfully embroidered clothing of the tribes-people.

There are also several Karen (long neck) Shan and Meo villages within the park where you can purchase traditional textiles and observe their traditional ways of life. Some villages also offer bamboo rafting and elephant riding (although personally I am not a supporter of elephant riding). 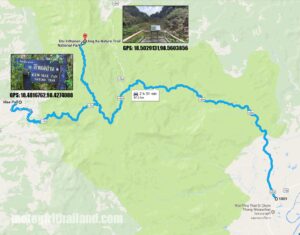 There are many walking trails in the park (ranging from 1 to 8 km) and its a true paradise for those who love to explore on foot. Many of the trails do require prior permission from the park headquarters though, and some may require a guide to be present. Check in at the ranger station first where you can also obtain maps and guides on available trails.

Kiu Mae Pan Nature Trail (google map link)
This trail begins at thet 45km mark and covers close to 2.5km (taking approximately 3 hours). The trail takes you past a string of viewpoints including one where you can gain an excellent view of the Twin Pagodas. This trail also takes you past the trail to Mae Pan Waterfall. Rhododendrons are a common sight (and commonly found in the Himalayas), and are best viewed between December and February when they are in full bloom. Prior permission needs to be sought at the park headquarters and a group of not more than 15 people is recommended. Food consumption is not allowed while trekking also. This nature trail has 21 stations which offer detailed explainations about the plants and ecosystems.  This trail is closed for reforestation from June 1 to October 30 annually.

Ang Ka Luang Nature Trail (google map link)
This trail is a 360 meter long trail which was surveyed and designed by a Canadian volunteer biologist. This trail is covered with indigenous plants that need a high level of nutrition, such as lichens and wild orchids. Rare species of birds can also be seen along the trail. The biologist, Mr. Michael MacMillan Walls, a devoted biologist unfortunately died from a heart attack whilst on the mountain.

Flora and Fauna
Due to the high elevation and abundance of water in the park the area is with lush forestry and a rich biodiversity that is unique in Thailand. The base of the mountain which is dedicated to agriculture is interspersed with deciduous trees, which lose their leaves at the onset of dry season. The landscape then changes at higher elevations, where the deciduous forests give way to large tropical evergreen trees.
Flora such as Vanda Orchids, Rhododendron and Phycastylis can be found growing wild throughout the park and fauna such as Chinese Flying Squirrels, Barking Deer and (even) Asiatic Black Bears live alongside a large variety of primates including Leaf Monkeys Gibbons, Macaques, and well over 30 species of bats. Doi Inthanon is also the best location in Thailand for bird watching, with over 300 different species residing or migrating to the area (see post below).

Birdwatching
Over 300 species of birdlife reside in the park, which includes indigenous and migrant birds. This includes Black-headed Woodpecker, Chestnut-bellied Nuthatch, White-rumped Falcon, White, Grey and Yellow Wagtails, Eurasian Woodcocks, Chestnut Thrushes, Little Buntings, Crested Buntings, Scarlet Finches and many more! There is a dedicated Information Centre located at 31km (known as Uncle Daeng’s Shop). Here you can gain information about the habitat and food of the birds and animals living within the park. There is also a Bird Watching Diary and sketches, trail guides, pictures and slides by various bird watching experts. The park’s protected status makes it a sanctuary for a wide range of animal species, making it an idea spot for bird watching, many of which cannot be found elsewhere in Thailand.  The best time for bird watching is during the winter season (November through to February). 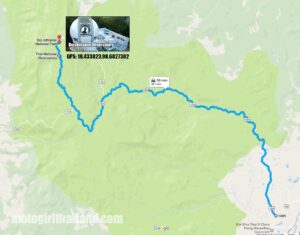 Located at the 44km mark, the observatory is the main facility of the National Astronomical Research Institute of Thailand. 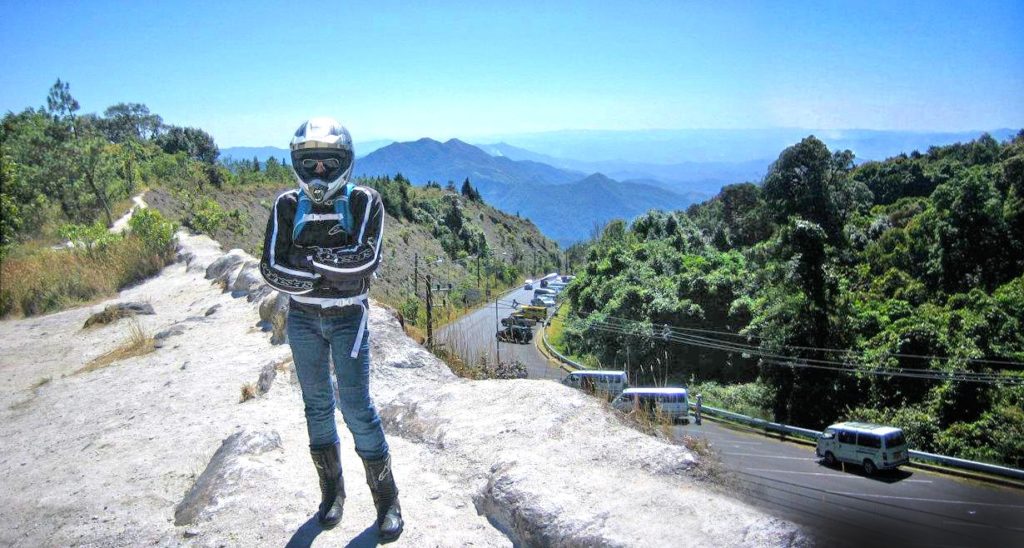 Any questions or if you have anything else to add, please comment below! 😀