The WRWR relay is the worlds largest motorcycle relay, with the offical baton being passed by women riders from country to country, continent to continent. The relay, which started out from Scotland, is the concept of UK rider Haley Bell, who was inspired by the idea of igniting a global sisterhood of inspirational women, and to promote and encourage the motorcycle industry into realizing there is a growing global market for women in Motorsports. 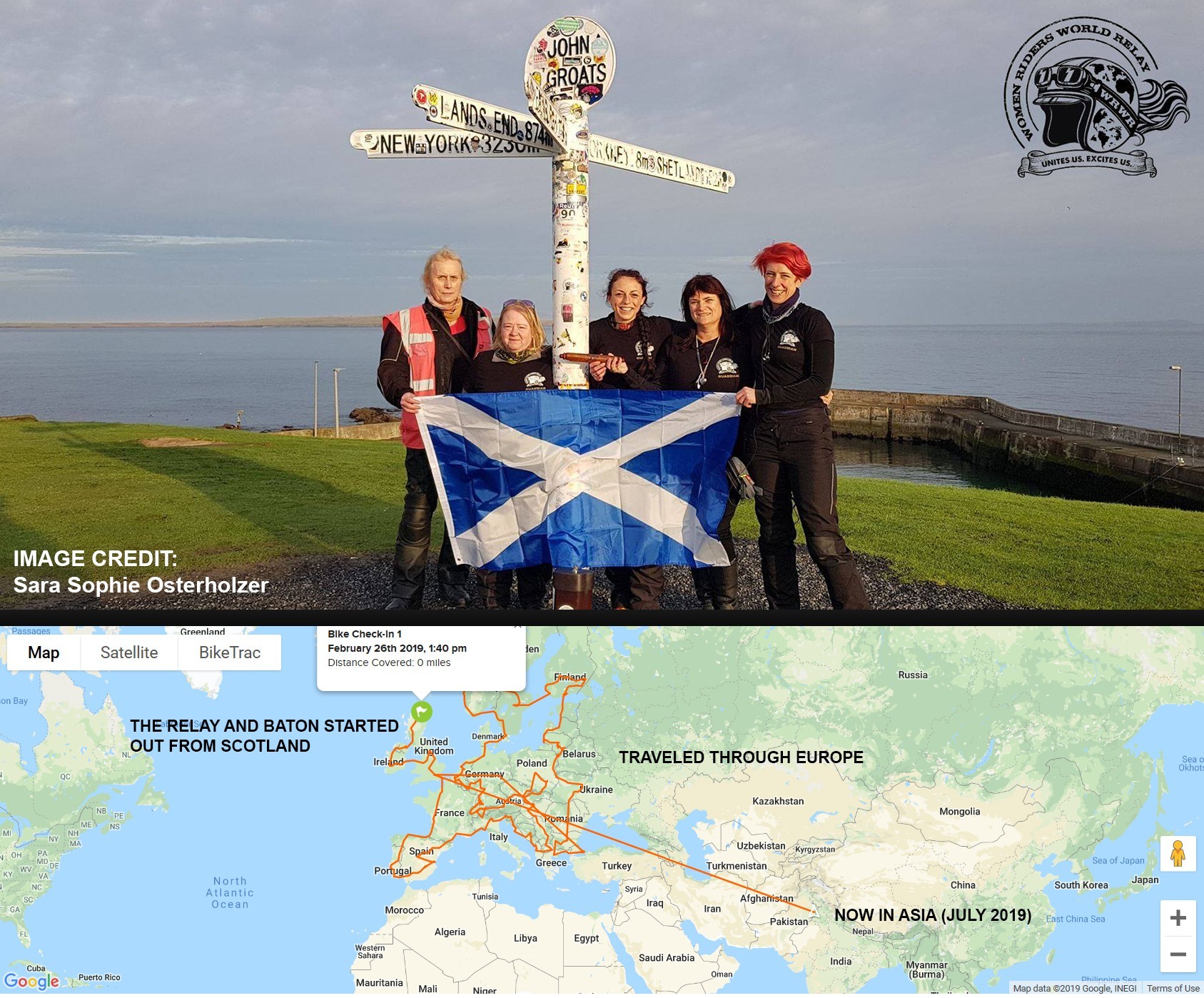 “I wanted to show the industry the force behind their fastest growing market that is currently being overlooked. My vision was realised when nearing 20,000 women from over 100 countries world-wide, joined WRWR’s initiative in a matter of months.
In order to impact the industry and achieve the necessary exposure, I began co-ordinating the worlds largest motorcycle relay, consisting of women passing a baton across 80+countries on their motorbikes”. – Haley Bell.

The baton, which started out from Scotland on February 26th, has made its way across Europe to Asia. When the baton reached Myanmar, the Thailand team started getting prepared to collect the baton.

Ms Wasa, the official Thailand guardian of the baton (who participated in the GS Trophy Trials, and who runs RIDE HORIZON group), arranged to meet the Myanmar team with her small support team at the Mae Sot border on the 28th July. The larger Thai support team (BIKER CHICKS THAILAND), planned to ride in from various provinces to a meeting point in Phrae region, then ride with Wasa to the overnight rest point of Nan Town, (and then onto the Laos border at Huai Kon the next day). 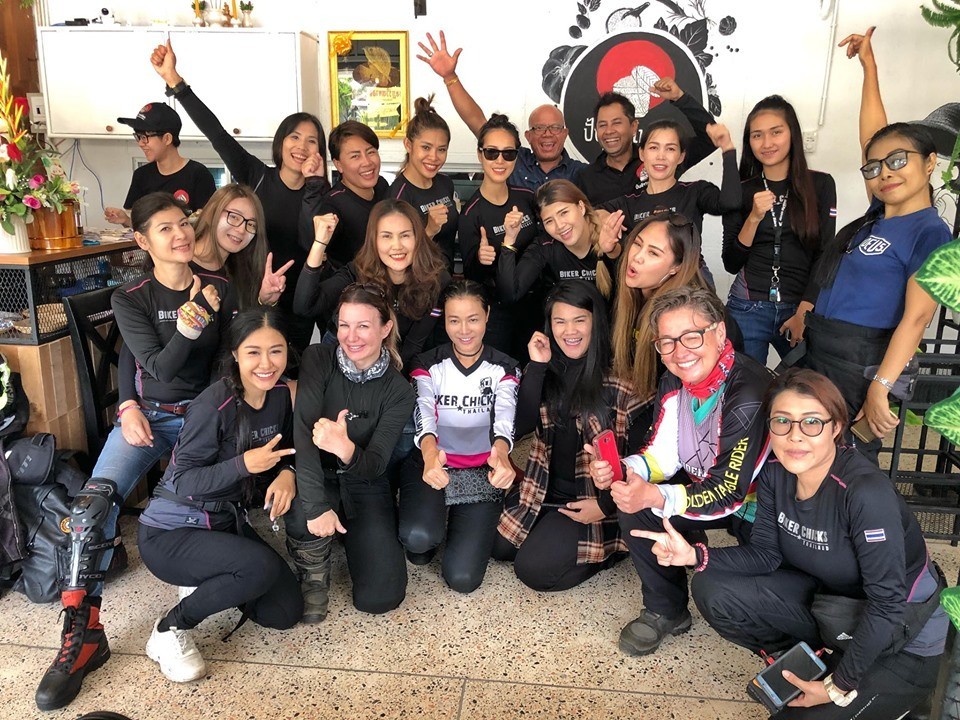 The BIKER CHICK THAILAND Support Team:
The main Biker Chick Thailand group initially met up at a meeting point close to Chiang Mai and then rode on together to Paan Khaw Niew in Lampang city, to await information from Wasa about the baton border pick up.

Myself and two friends rode in from Chiang Mai in our own small group, stopping in at the White Bridge in Lampang, before meeting up with the ladies in Lampang city.

When we arrived at the restaurant it was quite amazing to see so many lady riders with so many fantastic bikes.

When we entered the restuarant the ladies were lovely and welcoming, giving us water and asking if we needed anything. We waited in the cool restuarant for a while and then, when all riders were accounted for, we rode on to the next distation point at Ekanitcha Coffee, in Phrae Province.

For me this was quite a thrilling exprience. I had never ridden with a large group of lady riders before, and these were skilled riders too. The ride was orderly and well executed. 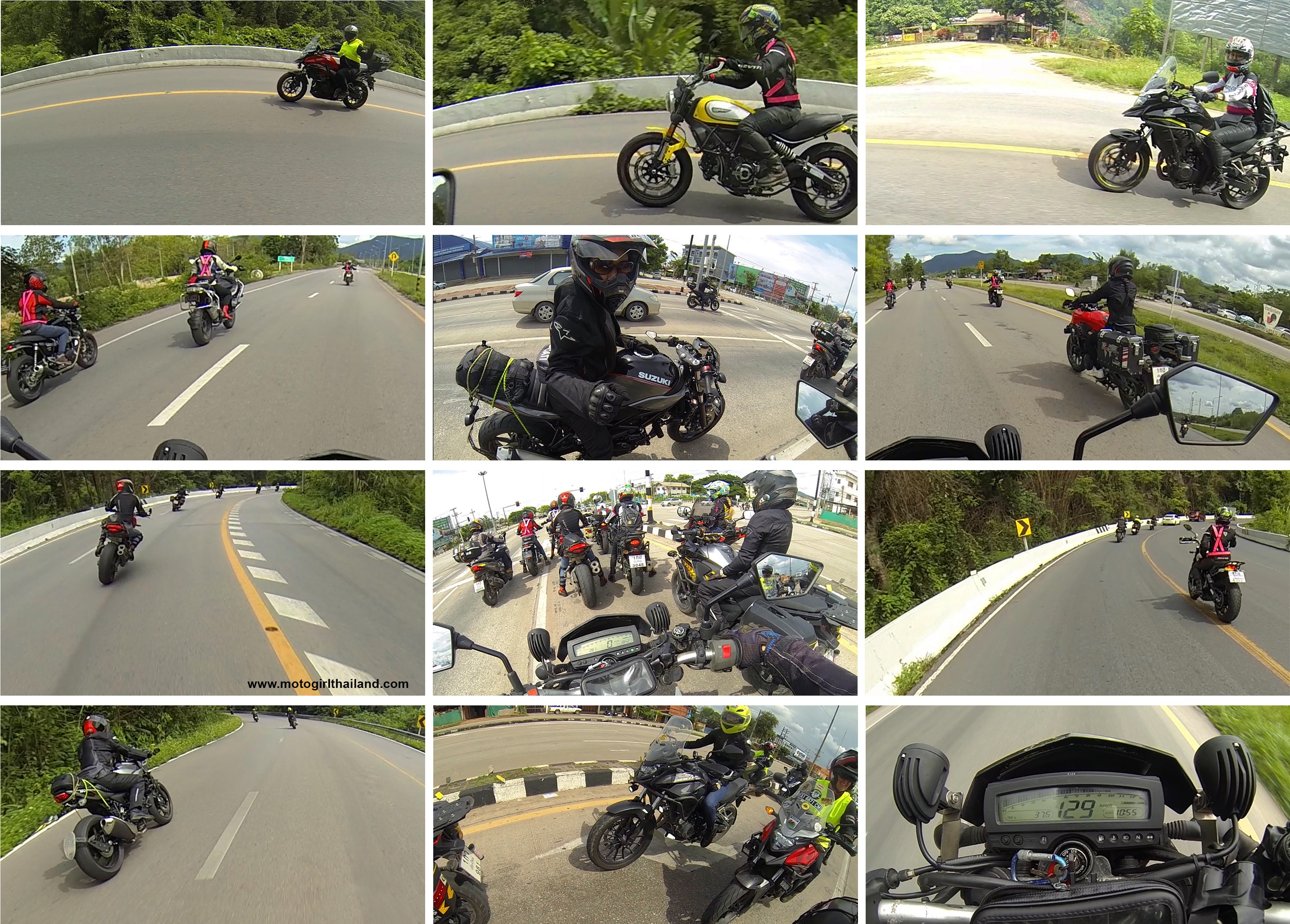 At Ekanitcha Restaurant (our official meeting point for team Wasa) we knew we had a long wait ahead of us. The Myanmar team had some unexpected hiccups en-route, which included the Myanmar main guardian Anne Cruickshanks’ bike breaking down! At the Thai/Myanmar border, there was also some red tape to get through, before the baton was allowed to cross into the hands of Wasa and the Thailand team.

Whilst we waited it was a good opportunity to take some fun photos, nap, generally mess about and also have another look at the fantastic motorbike collection:

At around 3pm the baton was finally in the hands of team Wasa, and they high tailed it to the meeting point in Phrae (approx. 260km away).

In Thailand the sun begins to set at around 6/7pm and Wasa arrived at 7pm. 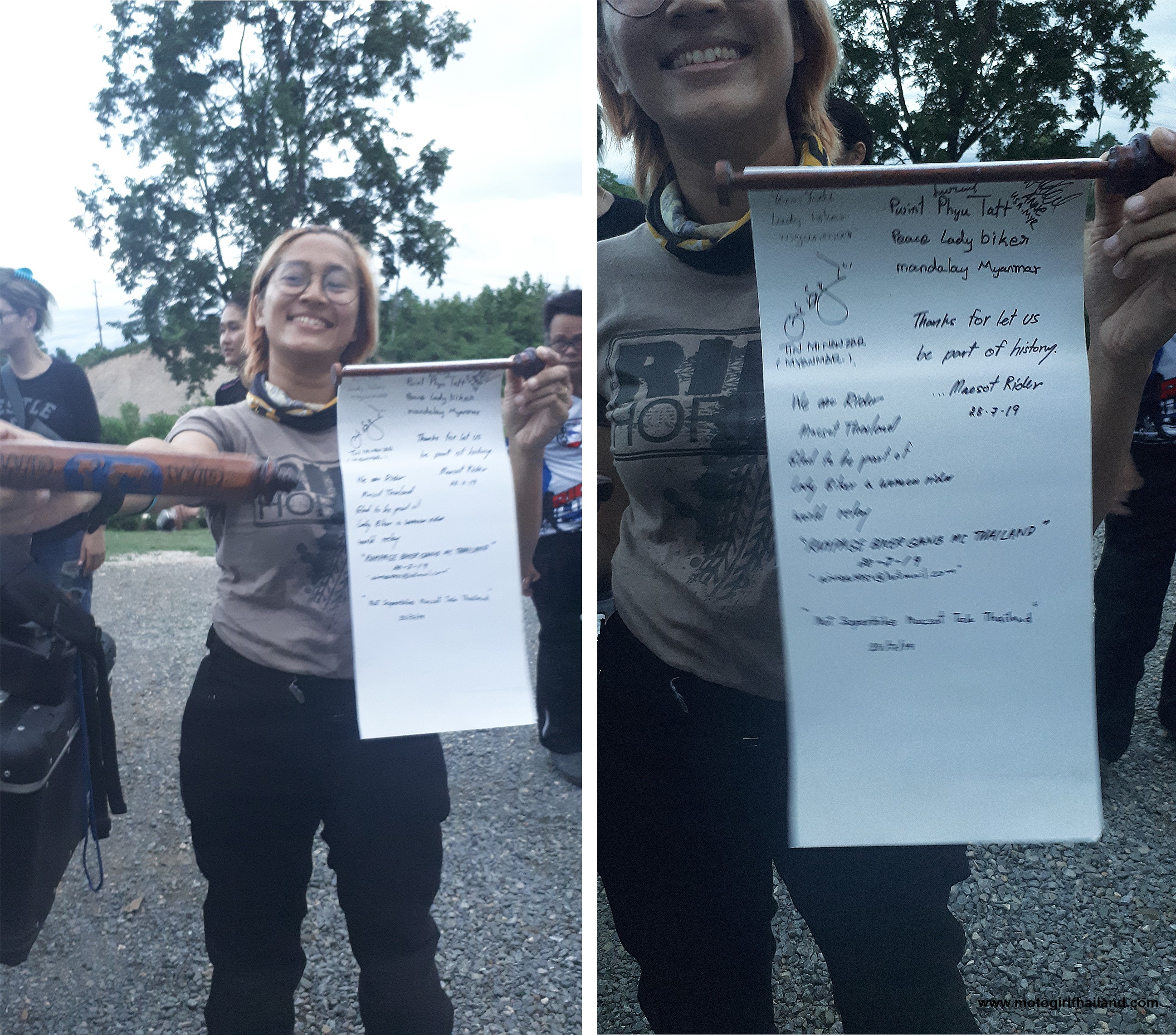 Once refreshments was had,, the sun had already set, so the support team then had to ride the last approx 166km to overnight destination of Nan, in the pitch black.

My friend Opal and I waved the team off. Due to commitments in Chiang Mai we could not follow on to Nan, so we wished the team good luck, and rode in the dark back to Lampang (approx. 50km away) for an overnight rest. We planned to head directly back to Chiang Mai the next day, (taking a short detour to visit Wat Chaloem Phra Kiat temple (a separate trip report for this full ride soon)

My friend Sammy Jay continued on with the Thailand team to the overnight destination of Nan.

In the morning the Thailand Team rode to Huai Kon border point, to hand over the baton to Laos rider Nilamon. Ms Nilamon, who runs Luang Prabang Motorcycle Club, will be doing the entire Laos ride solo, and will hand off the baton at off to Bekka Shadoan at the cambodian border.

An absolutely amazing global effort. History is being made!

Safe travels to all, and good luck to the WRWR relay and purpose!