Chiang Mai on Fire – Why the North Burns…

(Important contact numbers, organizations and telephone numbers are at the bottom of this article)

When hot season kicks in, residents in the north of Thailand prepare for the dreaded haze caused by “slash and burn”; a farming technique which is carried out throughout northern regions, including Burma/Myanmar and Laos. The burning can begin as early as November and end as late as May, with the worst of the hazing usually around late February and March.

This farming technique involves huge sections of forestry being set on fire to clear the agricultural land of any remaining vegetation. Once burnt the resulting ash provides a nutrient-rich layer to help fertilize new crops. A major downside to this kind of farming technique is the degradation of the land. The method can only be used for a couple of years on each section of land before the nutrients are all used up. This means a new section of land needs to be cleared for crops, which means clearing more forestry (and the flora and fauna within it).

This is not just a localized problem. This farming technique is popular in many areas of the world. It is favoured because it is easy. However, make no mistake in thinking it isn’t significantly damaging, for it is. Nor dismiss it as a traditional farming technique and thus not our business to object to it. This is a global responsibility. The practice is unsustainable and it MUST end. Slash and Burn is responsible for deforestation, loss of habitat and species, soil erosion (resulting in landslides and water contamination), increase in accidental fires and air pollution (and the release of carbon into the atmosphere which contributes to global climate change, and of course affects our health).

Hed Thob Mushrooms are another contribution to the preference of Slash and Burn farming technique. They are a prized (and costly) mushroom species that sold in markets for high sums of money, making them a lucrative crop.

The Slash and Burn technique is banned. But that doesn’t stop farmers from carrying out the technique. There is very little in the way of prevention and little consequence for doing so. One can only hope with significant public proclamation there will be changes to come. Thai people are not happy with this method of farming and are beginning to voice their concerns. 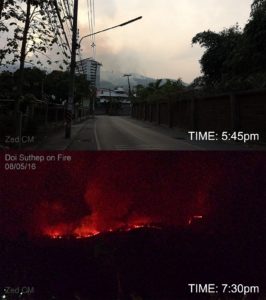 In truth though, it is very hard to change a practice which is easy to carry out, costs nothing to do, is an ingrained practice, and brings in so much cash (ie: from Hed Thob mushrooms).

Plus, burning also makes it easier to hunt for wildlife when their natural habitat is destroyed.

What is the solution? Well, there are methods that countries are trying out with local farmers which involves fertilizing fixed plots (rather than burning and moving to a new location). This method includes planting leguminous crops to put nitrogen back into the soil, introducing cover crops and fruit trees (to reduce erosion and stop the growth of weeds), and alternating crops to improve soil fertility. Methods which ultimately require effort. So, although will provide a good income, it certainly wont appeal as much as the quick Slash and Burn (and the rewards reaped from it).

Given that the northern regions all suffer from terrible clawing smog and dangerous PM and AQI levels, things certainly do need to change. This is a situation the the government to (You can view levels via this official site:http://aqicn.org/city/chiang-mai/).

As mentioned earlier, there has has been rising recognition about the damage the burning is 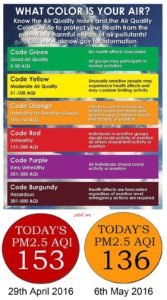 doing, not only to the flora and fauna, but to people’s health. Campaign’s have been taking place to promote awareness and show upset over the lack of enforcement, such as the “Bye Bye Smog” rally. Hopefully there is a sea of change taking place over this, even if the tide is still far out..

For ten years now I have been witnessing the devastation that burning season causes.  Each year I tell myself that the next year I will not remain in Chiang Mai or the north, but for some reason I end up staying and waiting it out. Many residents who can escape the region at this time, do. The weather at this time is often around 40c / 104f region, so teamed with the poor AQI the quality of life in the northern regions become poor.

Burning season 2016 was a particularly lengthy burning season, which continued on until May.

On May the 8th a devastating vision met us all in Chiang Mai when we saw our beautiful mountain ablaze.

This short video was earlier in the day and then later in the evening.
It resembled a large dragon eating up the mountain.
A sad and mesmerizing sight.
I felt sorrow about the what the wildlife must be going through as the fire raged through the forest. 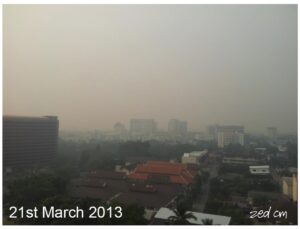 Over the years I have seen a lot of burning. Here are some images I have captured  from previous years:

Another burning video I recorded in 2013, shot in Pai, Thailand.

These are some images of the devastation caused by Slash and Burn. 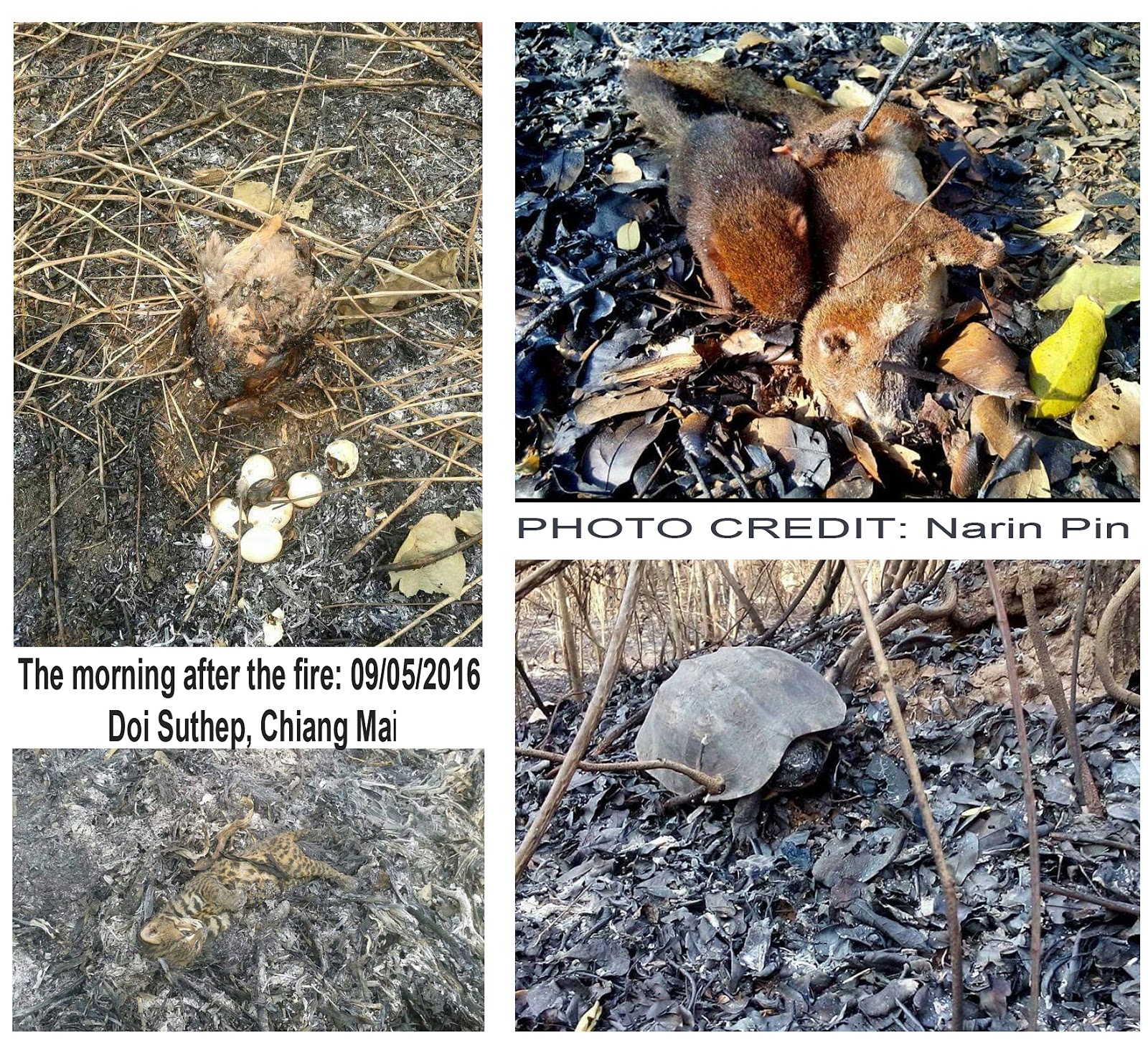 Take a moment to really digest what these poor creatures and many more like them suffer from the result of Slash and Burn farming. Suffering that animals all over the northern region unnecessarily endure each year from these fires. Frightened out of their minds and burnt alive. Their charred remains a sad image of the damage these selfish practices cause.

I confess I had to reign in some deep feelings of anger and upset upon seeing these images. Something about seeing the charred remains of innocent creatures brings home the horrific devastation these farming practices cause. I have to hold back from expressing strong words to describe what I think of the inhumane selfish individuals who carry out these fires. My only hope is that shocking images such as the photo of the wildlife above and information about damage to health and global climate effects will cause outrage and finally make some difference in enforcing preventing of burning practices. In truth I do not hold my breath on anything changing though. This compounds the sorrow I have in my heart because not only do we have the death of nature on our hands, we have the knowledge that their death is likely all in vain, for the practice will continue.

It is our responsibility as humans to care for nature and the countryside. DO NOT write slash and burn farming off as not your business even if Thailand is not your birth country. Whether a Thai national or not, this horrific technique should not be taken lightly or written off as tradition. Do not underestimate or take lightly the damage this technique causes. It not only destroys nature, it creates toxic fumes. Plastic and rubbish also gets burned at this time.

Make no excuses, this practice MUST end!