(14th February 2019) The Chiang Rai Singha Park International Balloon Festival is a spectacular annual event, where participants from 14 countries (including the United Kingdom, United States, Switzerland, Brazil, Philippines, South Korea, Taiwan, Austria, Latvia, Germany, Italy and Japan), all come together to display their fabulous balloons. The event runs for five days (this year it was from 13th – 17th February), and over the course of the event the park hosts some great music concerts as well as providing plenty of food and drink options. A great event to visit and fun for all ages. Entry fee is just 100 baht for a day (and night’s) worth of entertainment. Food and drinks are reasonably priced. Seeing as I had always meant to visit the event, but never did, I figured it was time to. So, I incorporated an interesting ride around it. 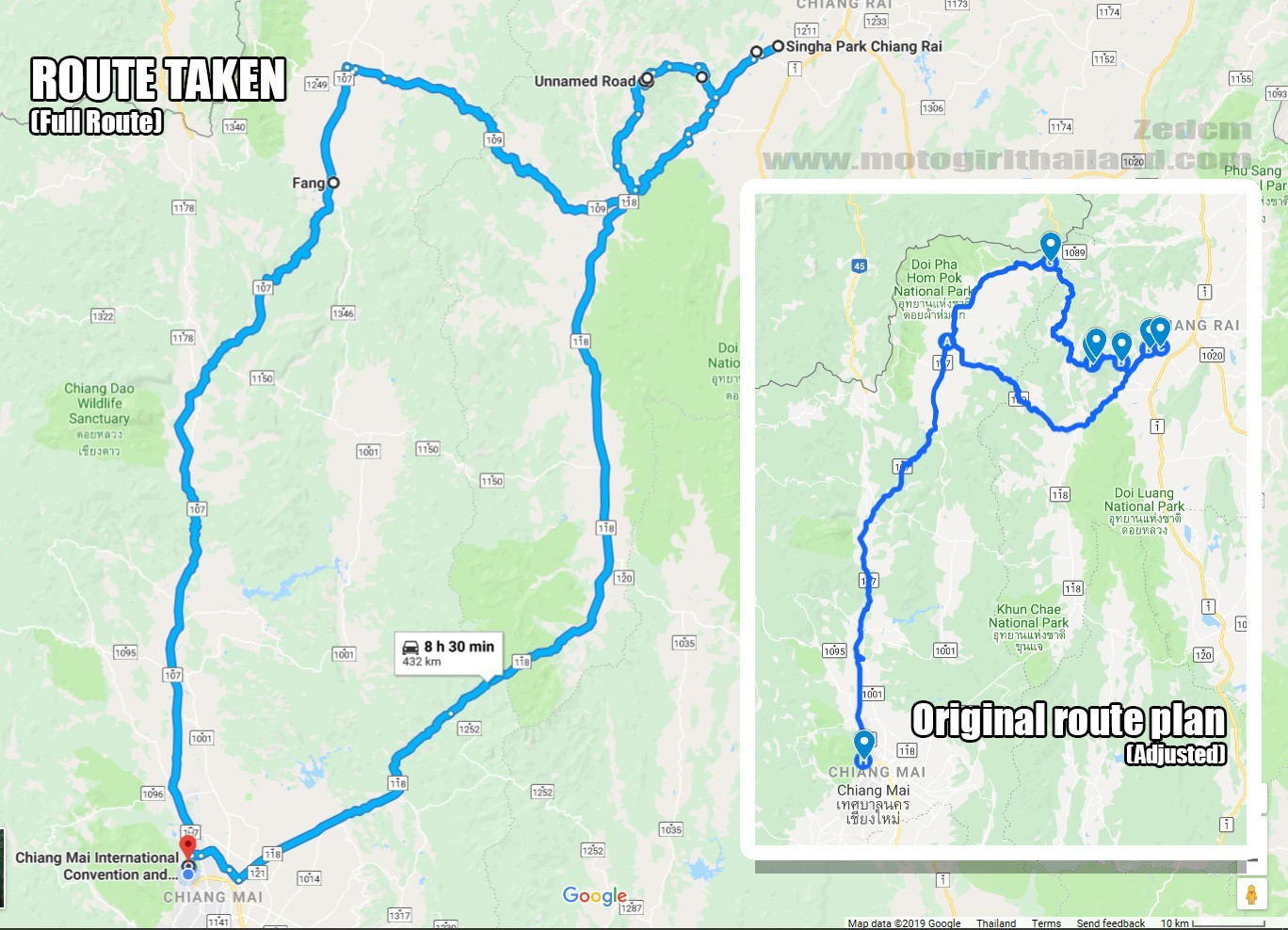 (*note* for some reason Google Maps insists on directing the course around Ang Kep Nam Huai San reservoir, but you can ride through it, as I did). Originally I planned to ride this route (Google Map Link), but I had a riding partner on this trip and they insisted that it would be better to meander around Doi Chaang area and take some time out to visit a few places, then head down the main R118 instead. After adjusting my mindset and relinquishing my original plan, I went with that idea instead.

THE RIDE UP (Google Map Link) 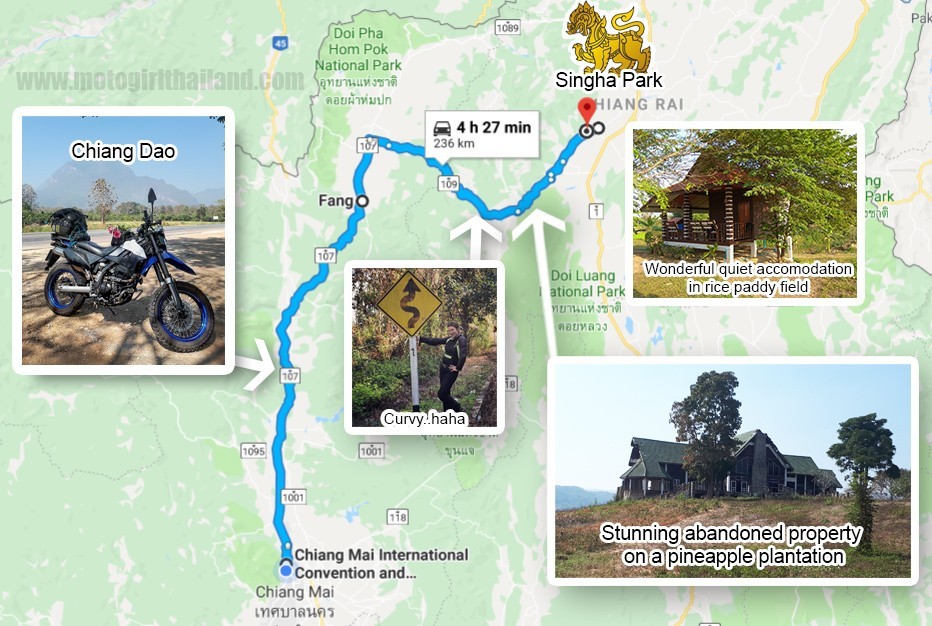 Took the more scenic 107 route up via Chiang Dao, instead of the main 118, stopping in at THIS pretty coffee shop/resort for a coffee break (forgot to take photos of the actual coffee shop, but trust me, it is very pretty!).

Outside this coffee shop is great place for a quick bike photo op too, especially when not in Burning Season, which we are in now, sadly. Info on Burning Season HERE.
This photo shows roughly the same view, illustrating the difference the haze makes during Burning Season 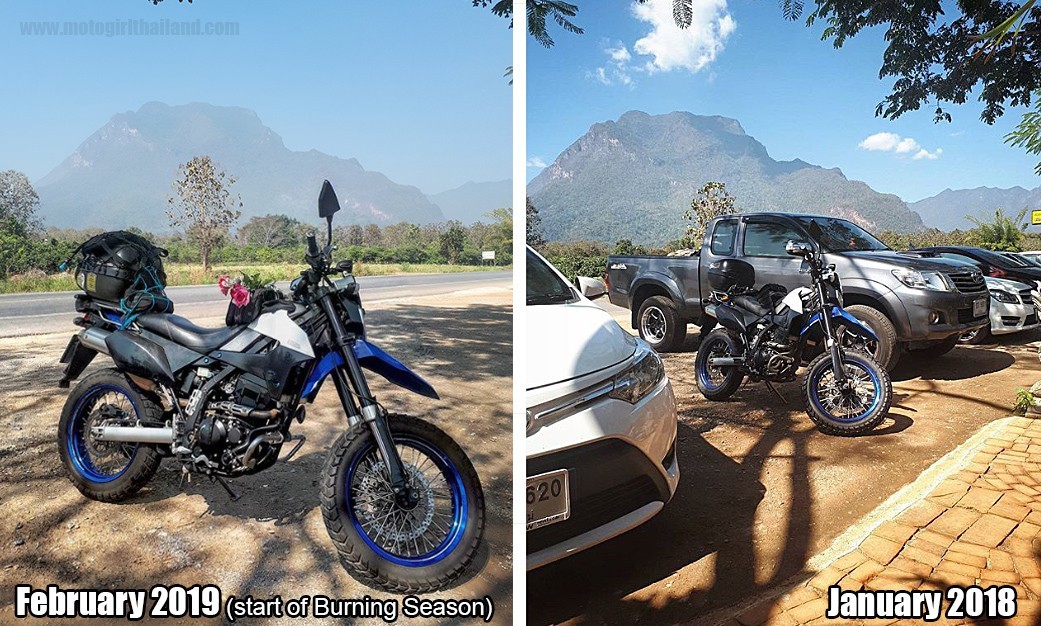 After a coffee break it was a straight ride up to Fang region and then a right turn onto the R109.

Normally the R109 is a really pleasant ride, and although not exactly unpleasant, the polluted air from the haze/burning and the rising heat of the day made it less of an enjoyable ride than it would normally be in cooler or cleaner months. Still some great twisty sections though and some nice views, although a less clearer than normal.

Had the opportunity to get a great perspective shot. (Location HERE)

*TIP FOR THIS PHOTO* – Set up your camera or record a video from the location spot, then ride to the opposite side. Easier if you have a riding buddy with you to take the shot. Best if you have phone reception or Bluetooth, to get the exact position correct. Voila! Interesting perspective shot.

Came across this amazing abandoned house too (Location HERE). 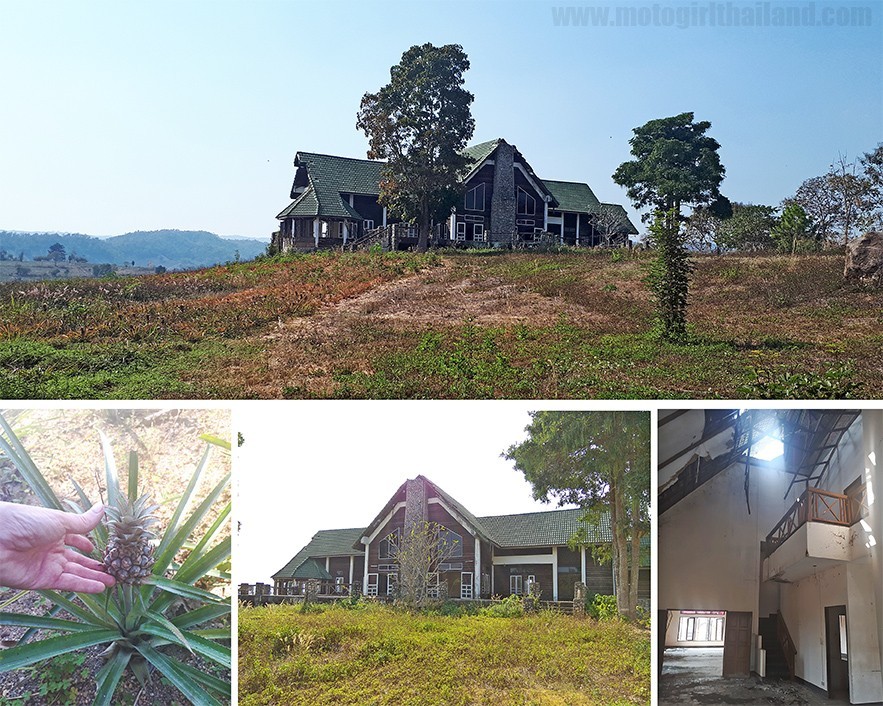 The ride was pretty much none stop and arrived at the pre-booked accommodation near to Singha Park in plenty of time for a shower up and rest, before heading to the park to watch the balloons at sunset.

Accommodation: Hearn Him Tong
Knowing that the accommodation around the park would likely book out fast, I booked online a few days in advance (via Booking.com). Even then I was lucky to get a last minute room. Everywhere was booked solid! Funny thing is, when I booked it I wasn’t sure if the accommodation would live up to the images posted online. When I pulled up into the area that the accommodation was supposed to be in (an area of rice paddy fields) I saw an absolute run down horrible looking wooden house and my heart sank. I thought I had made a terrible mistake and overpaid for an absolute dump. Anyway, as luck would have it I was wrong, and it turned out to exceed expectations! The small teak home was all on its own (standalone bungalow) right within a rice paddy field. It was absolute bliss! I could not have hoped for better (except maybe a softer bed ^^) 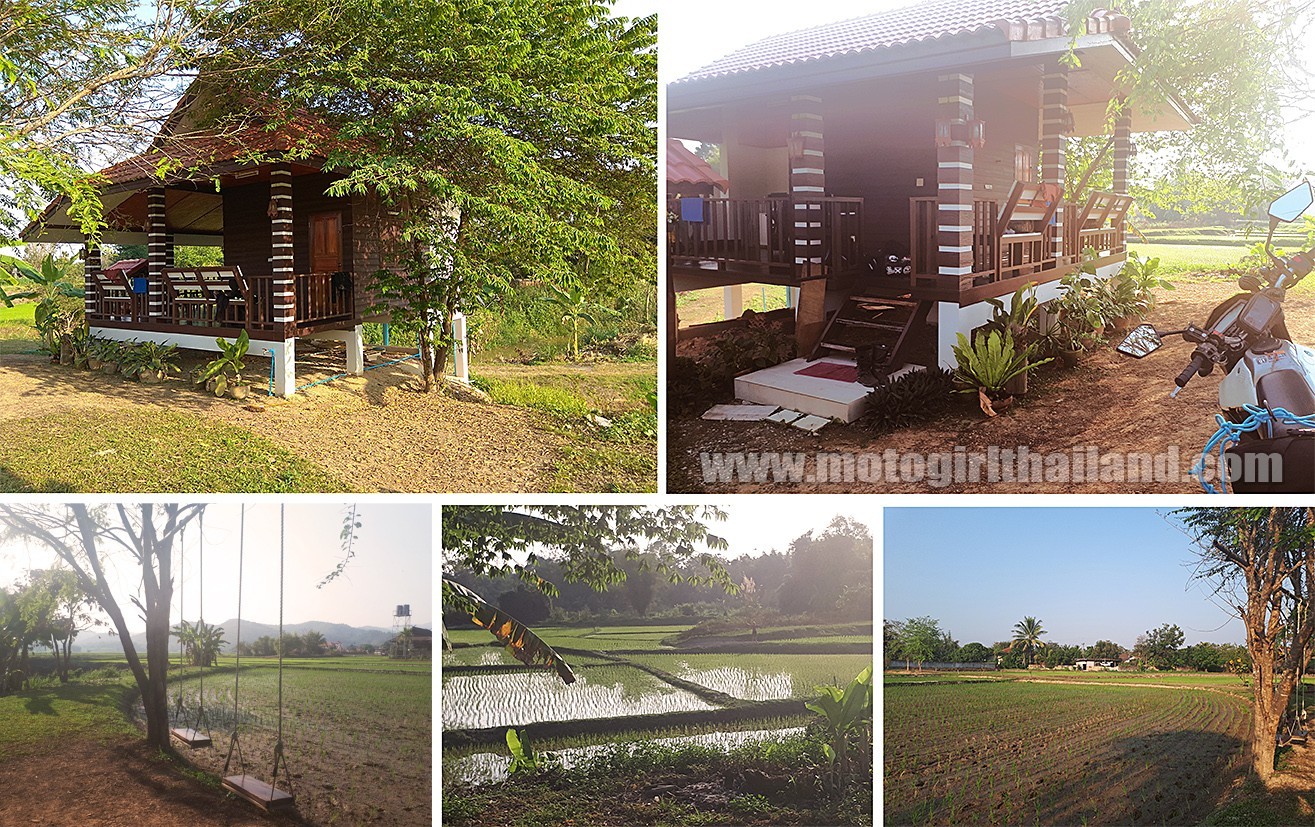 So onto Singha Park International Balloon Festival, and WOW, what a fab experience!

The park itself is pretty amazing, and when an event is on a lot of work goes into it. I previously attended the International Jazz Festival there (trip report HERE), and it was well put together. The stage and lighting and sound system are great. So thankfully no horrible tinny sound coming through blasting your eardrums.

The balloons at sunset looked amazing. 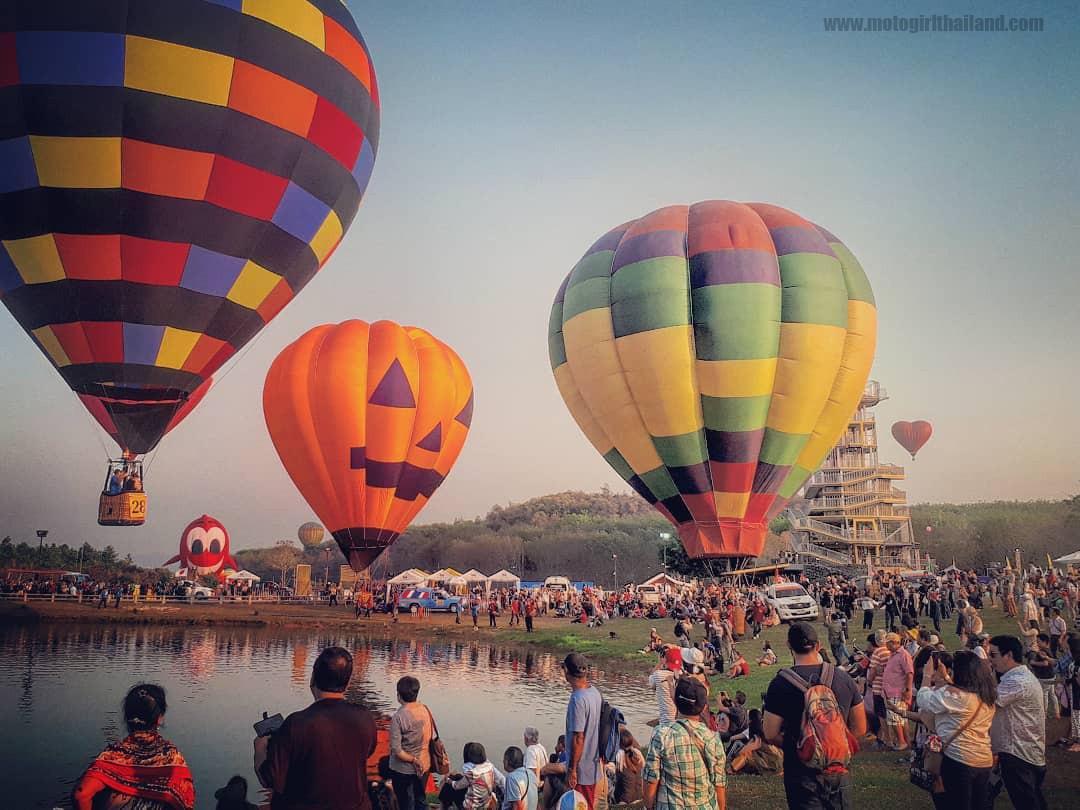 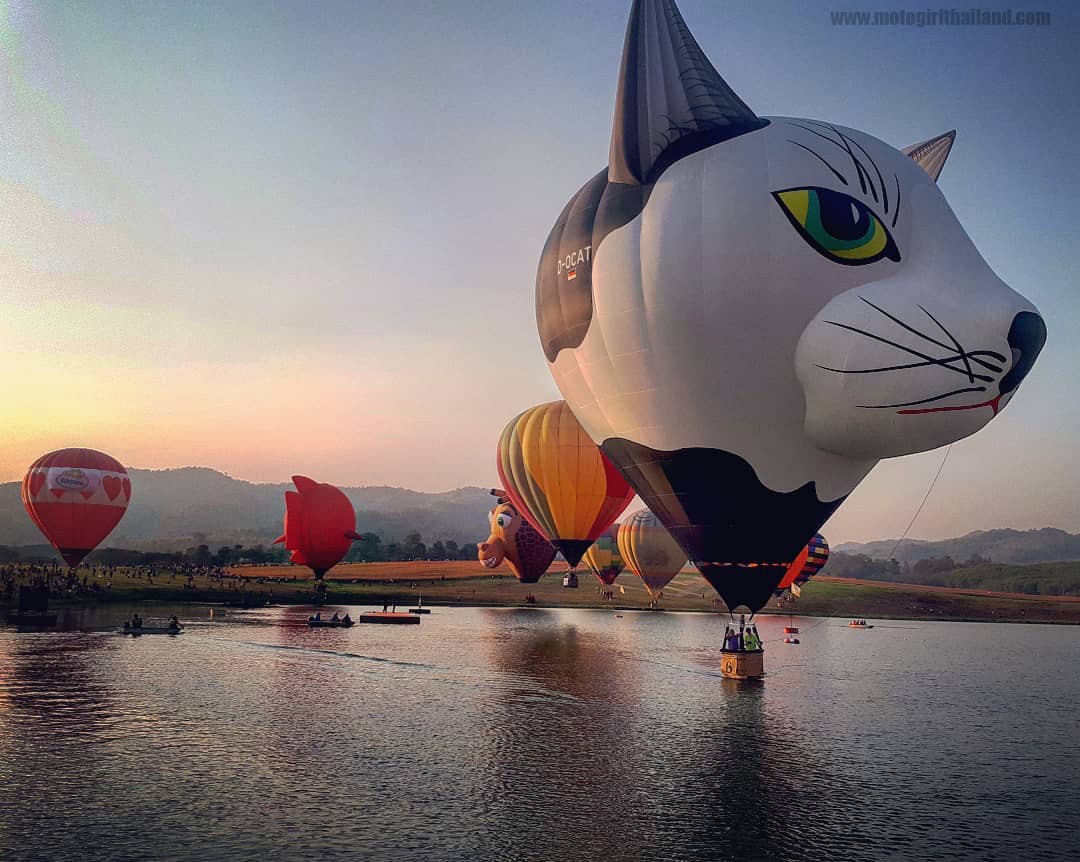 At around 6pm or so the balloons start coming down for a break, before the night show. Time for the pilots to get a break and also to get more gas for the balloons.
Just gives the perfect opportunity to look around, walk around, eat and drink. 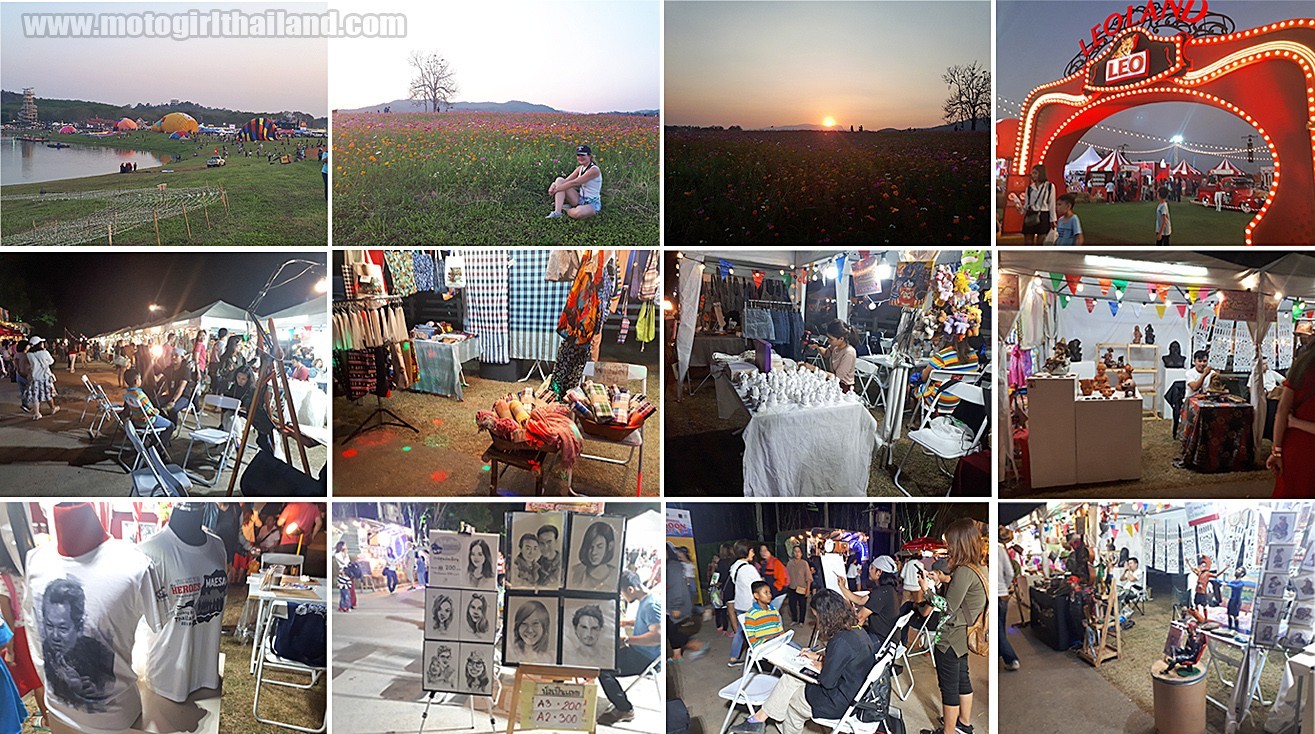 Some great food stalls around at good prices. Also sampled and odd beer made from sweetcorn. Tasted just like a light lager, but with an odd sweetcorn smell which was hard to get used to. Just 80 baht for a huge amount.

Not sure of the alcohol percentage either, but I didn’t drink a drop more after this as my head was spinning..haha! 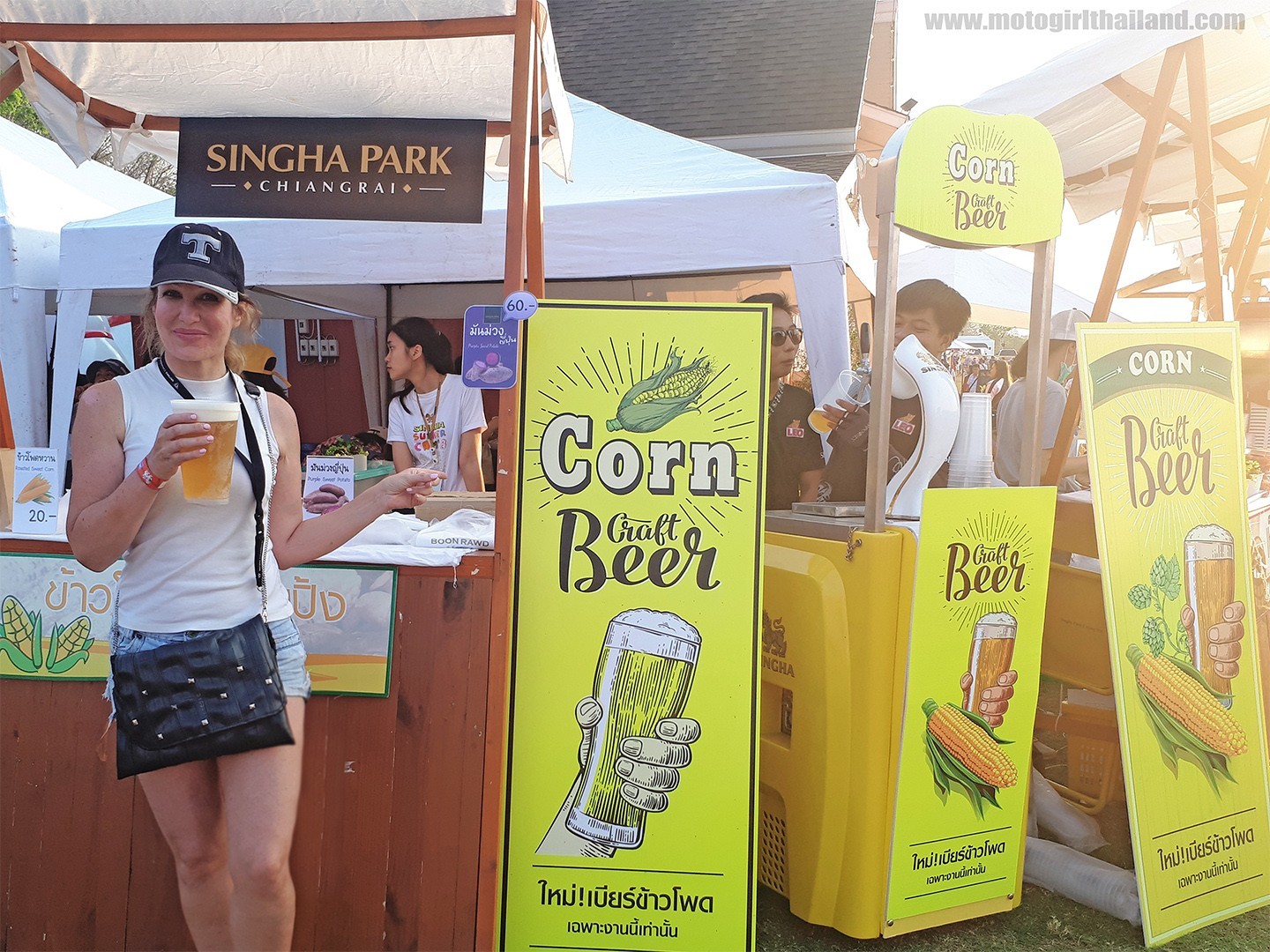 At around 7pm the balloons started inflating so I found a quiet place to sit and watch away from the main crowds. By 7:30pm the crowds started gathering around the balloons and waterside and by about 8pm the show began. ..and what a show it was!

After the show was over it was straight back to the bike park where I spotted a Royal Enfield Himalayan and an odd bike calling itself a BMW?? o.O What is it?? Is it? I am so confused!

By around 9pm I was already back at the accommodation ready to enjoy a quiet early night (..except that the concert from Singha Park could be heard across the way. No matter though as wasn’t too loud and eventually subsided). 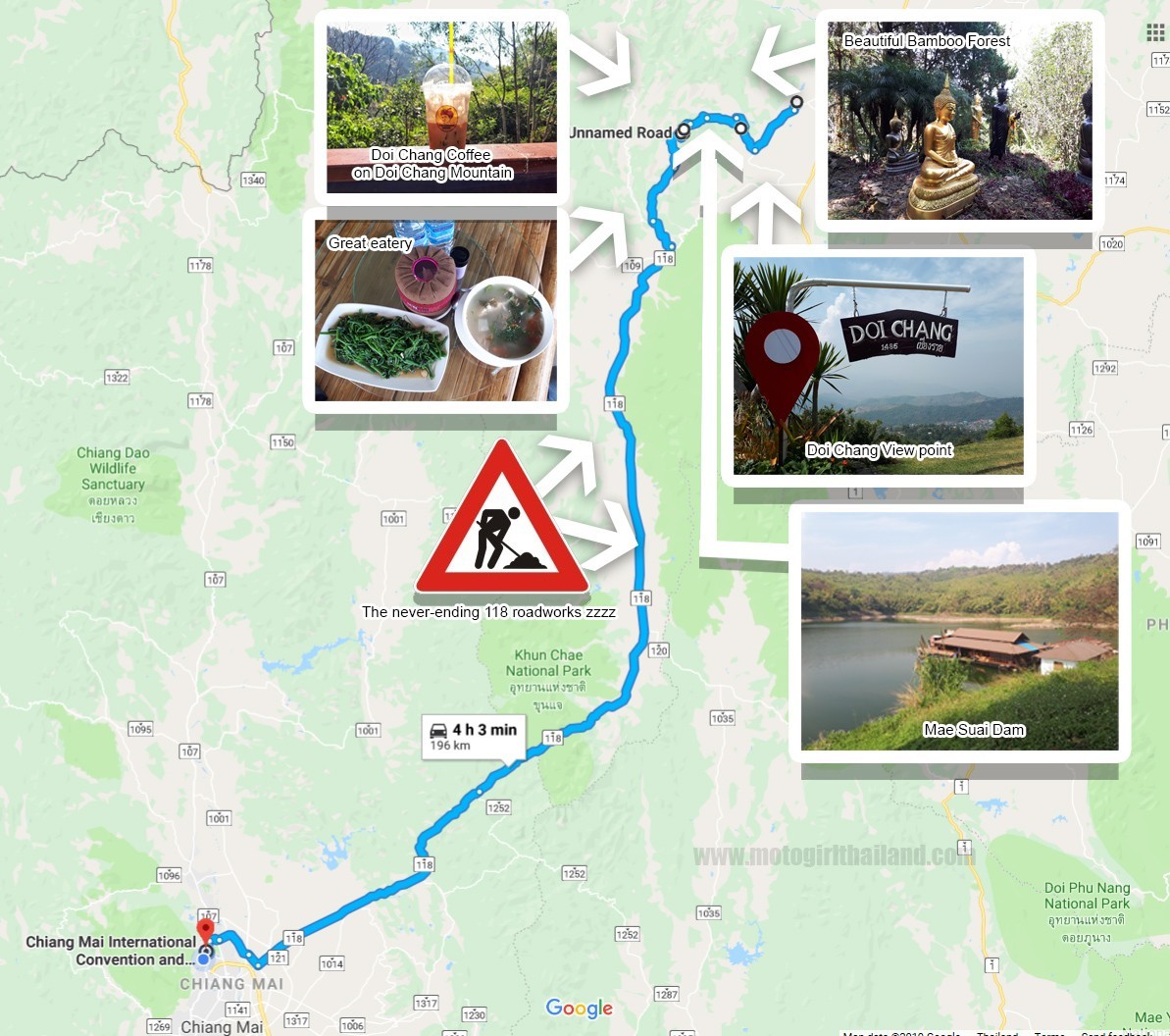 Initially I planned a route that would go right up through the mountain from Doi Chaang to around Thaton area. It would have been a great twisty ride over the mountain road. (Looks really fab on google maps). Then planned to ride back down the 107 past Chiang Dao to Chiang Mai. However, I had a riding partner with me on this ride and they wanted to explore more of Doi Chaang and Doi Wawi area rather than do a lot of km’s riding. So, the initial plan was aborted and more time was spent in Doi Chaang and Doi Wawi. (That also meant heading down the rather boring 118 with its never-ending roadworks, but that was the price to pay for meandering in one zone).

In the morning I woke to this glorious view

First fun stop was Ang Kep Nam Huai San dam and the reservoir crossing. Always feel like a kid when splashing through water, except welly boots and puddles are replaced by motorbikes and reservoirs. The ride through it had me giggling like a five year old. 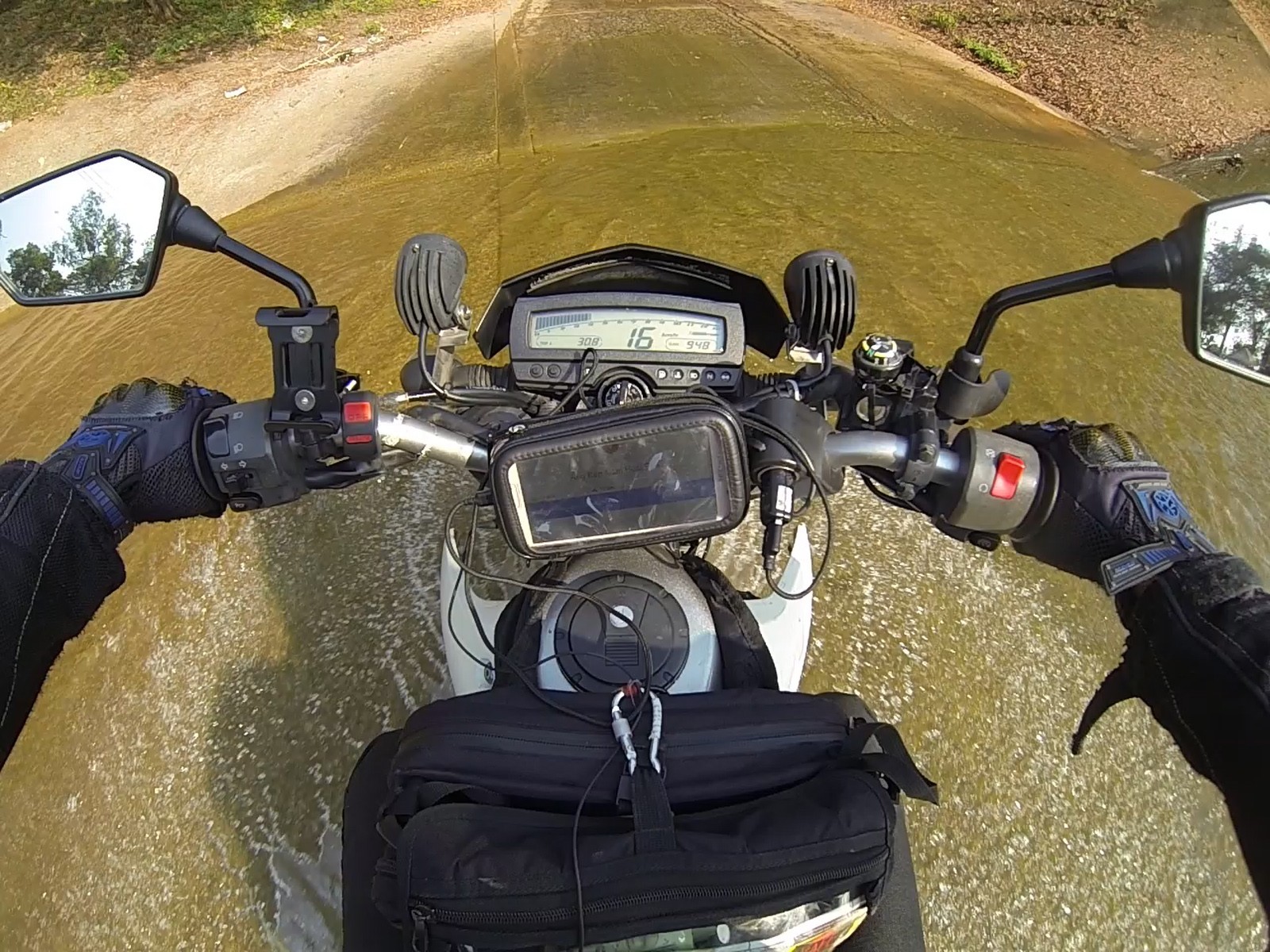 Next was the fab super twisty ride up through mountain and forestry to Doi Chaang Coffee Farm. 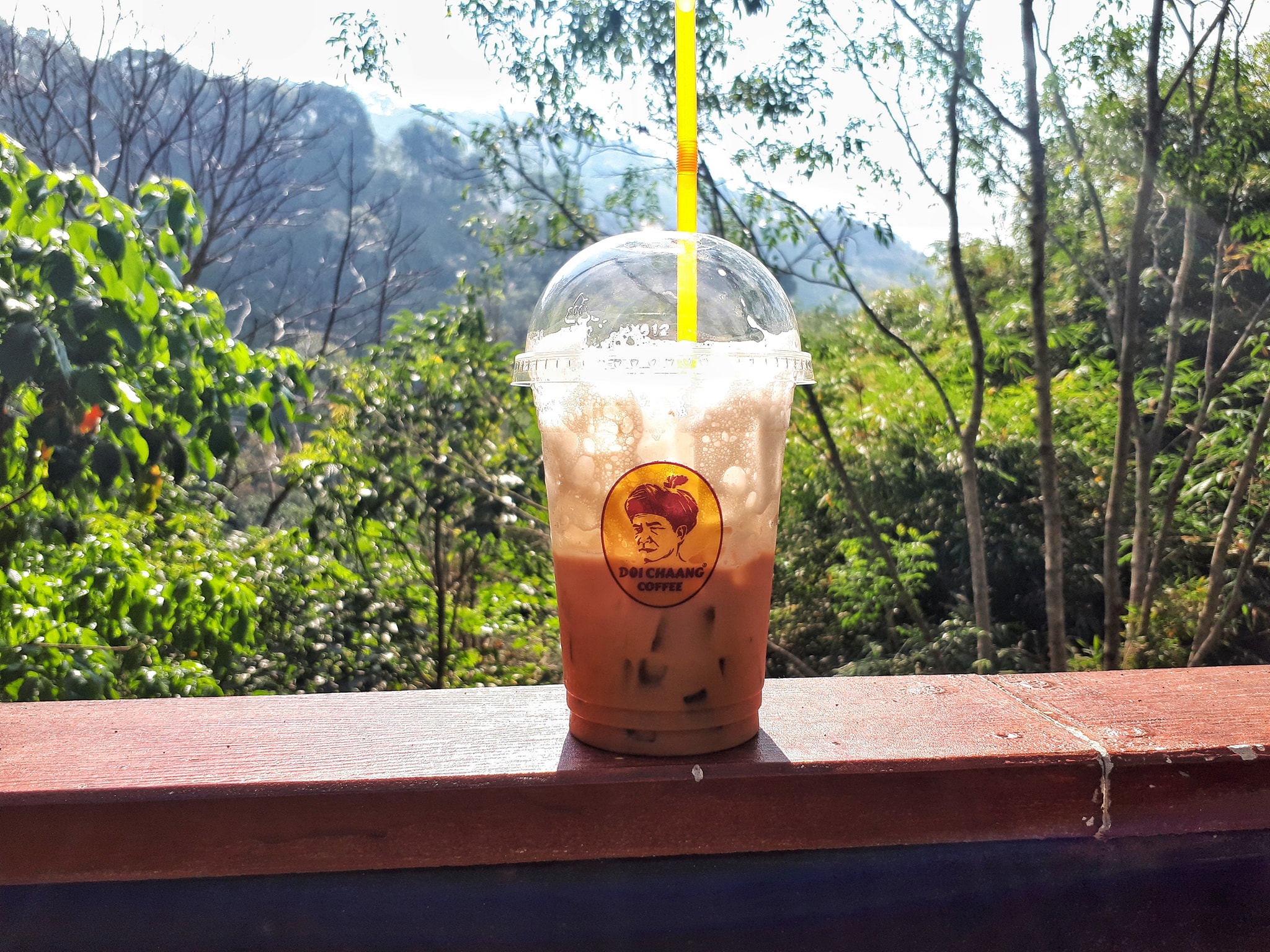 At the coffee shop I spotted an EXTREMELY sleepy dog! 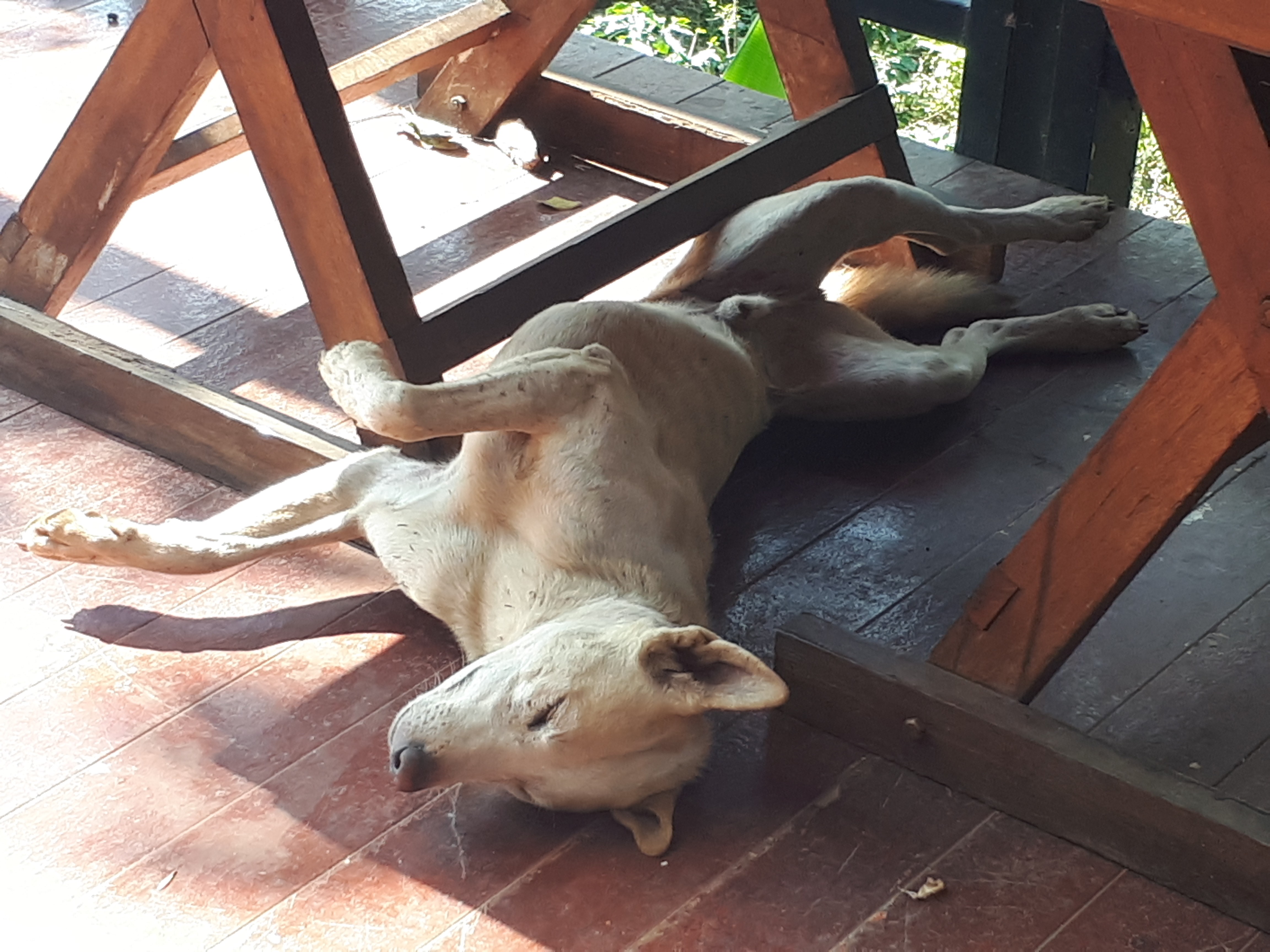 and also some fighting horses…!

Next ride was to the beautiful tranquil Memorial Park 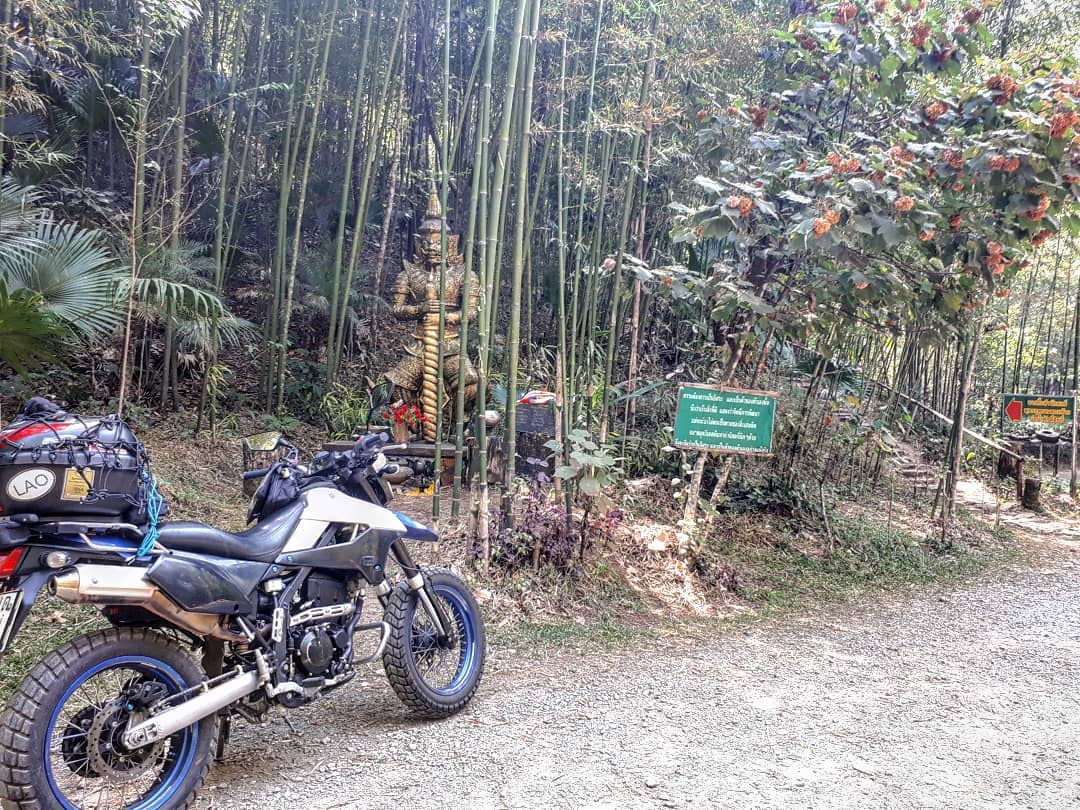 Took a walk around the stunning bamboo forest down and down to a natural pond area.
The forest area itself is a little bizarre with flashing led lights and Hindu music, but wonderful.

Very peaceful in terms of man made noise, but very alive and noisy in terms of glorious nature sounds.

Also crossed paths with a rather angry pig. Well, he didn’t start out angry, he was sleepy, but he got really irritated by me laughing at him. Haha. Oops.

Next, following the path along on bike leads to Doi Chaang mountain viewpoint.

Sadly a little hazy so the full view could not be seen, but still quite beautiful anyway. 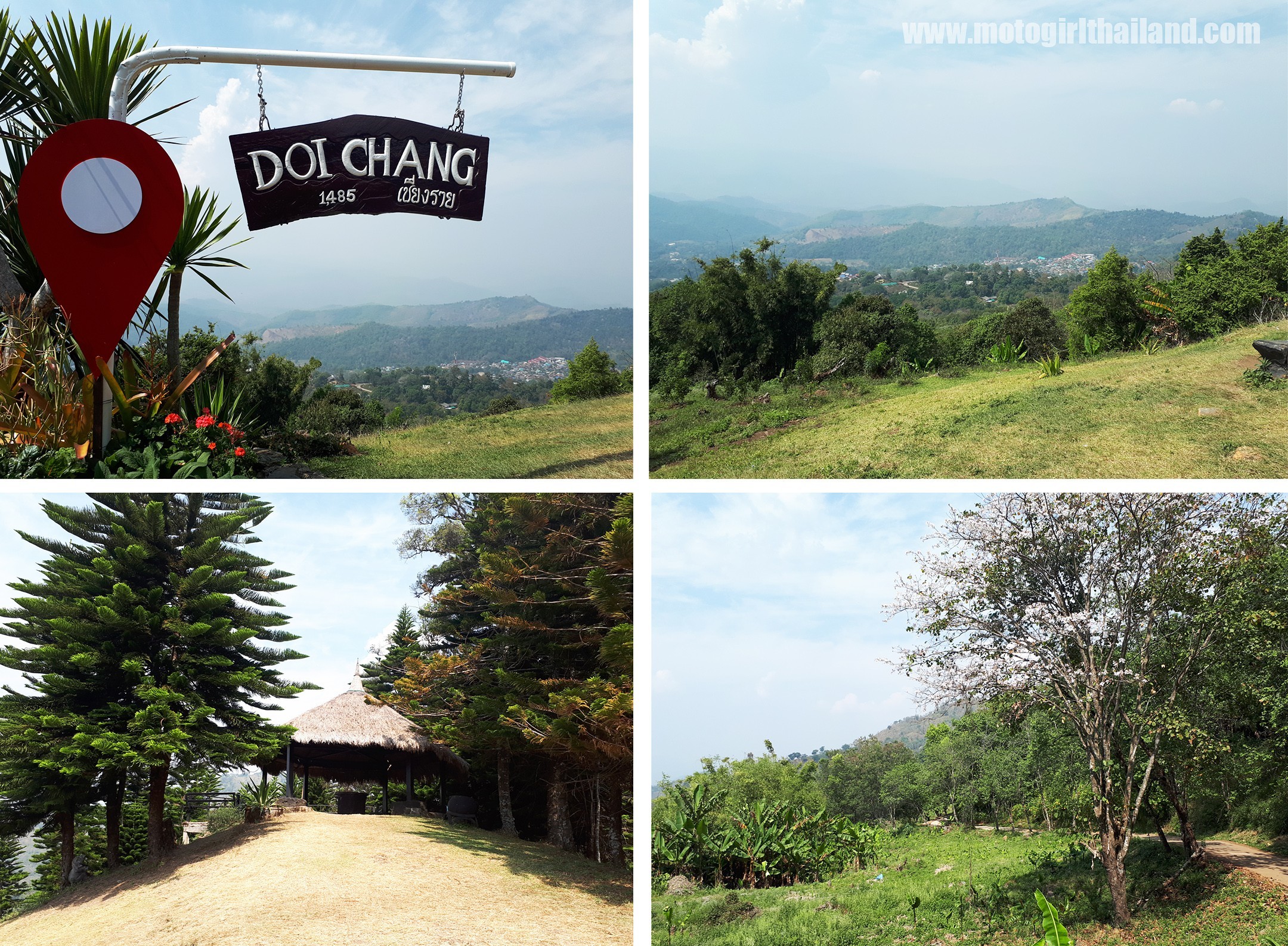 After the viewpoint had a ride back and forth around the area, checking out different small roads and getting a little lost. Hunger set in so had a stop at a really great venue. JaDae House Coffee & Food. 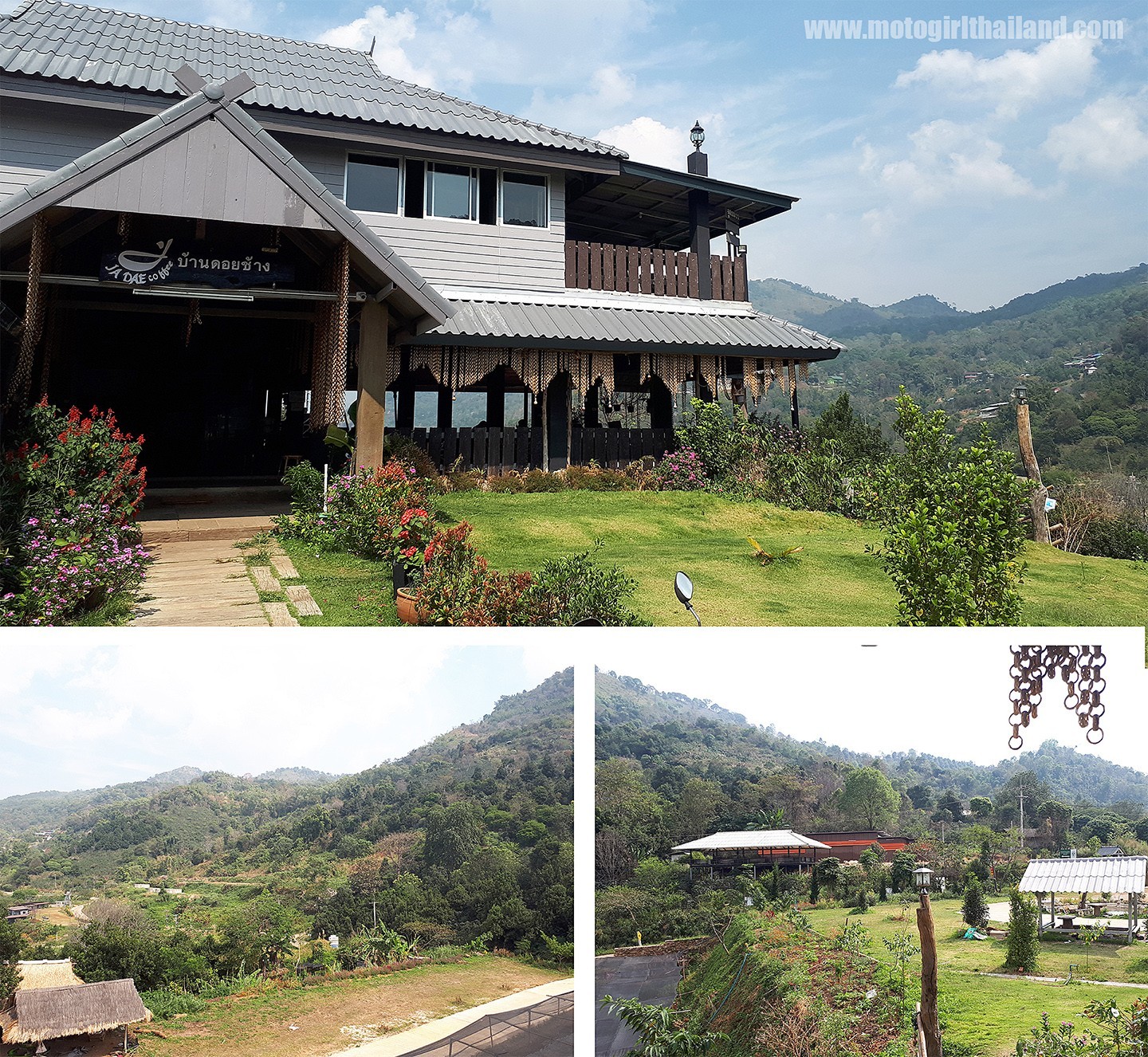 The food was so fresh and tasty! 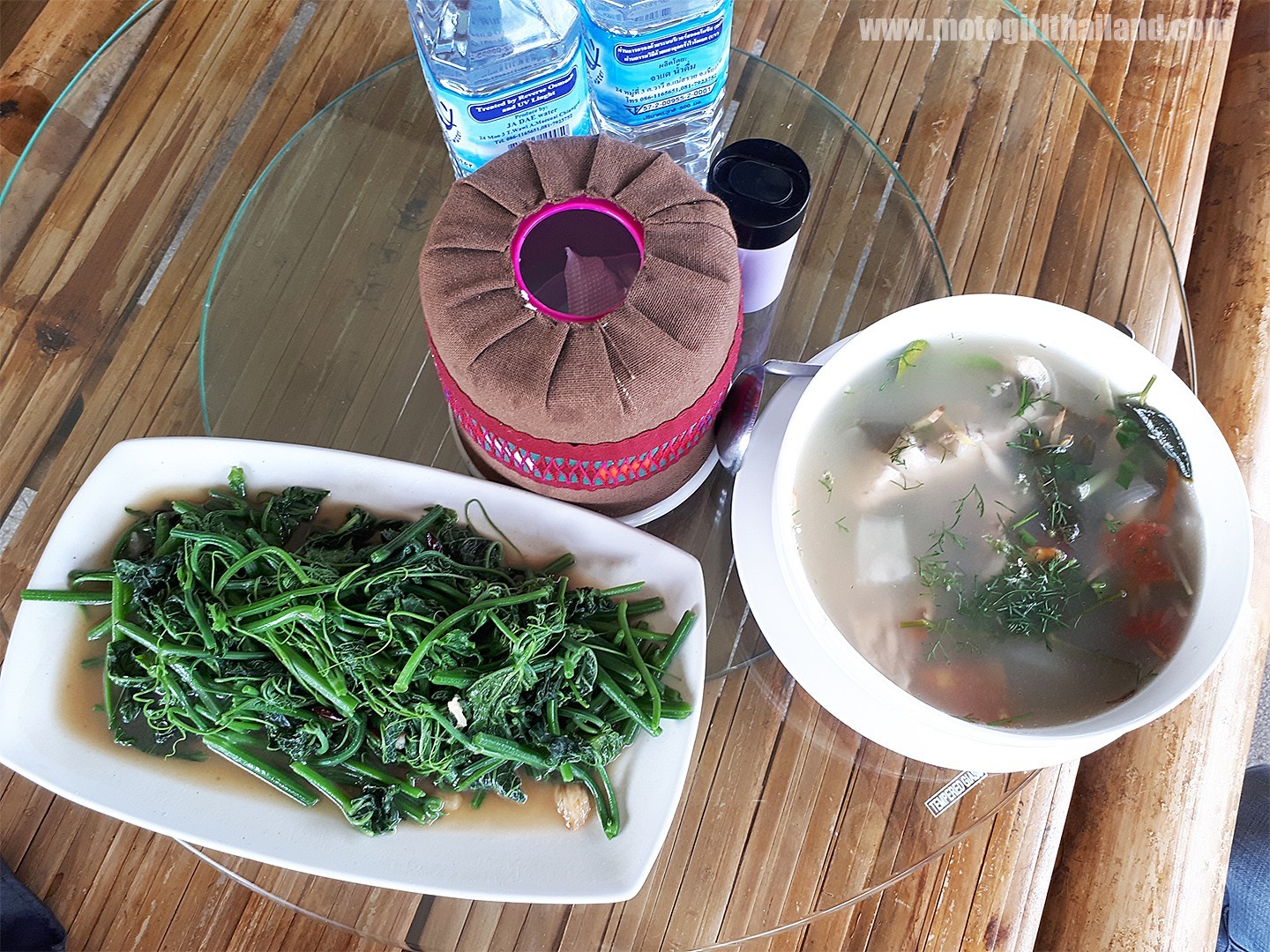 The toilet design was a little funny though… ^^

After lunch it was time to head towards the R118. On the way there were some sections of bad roadworks going on. It was also super hot by then. 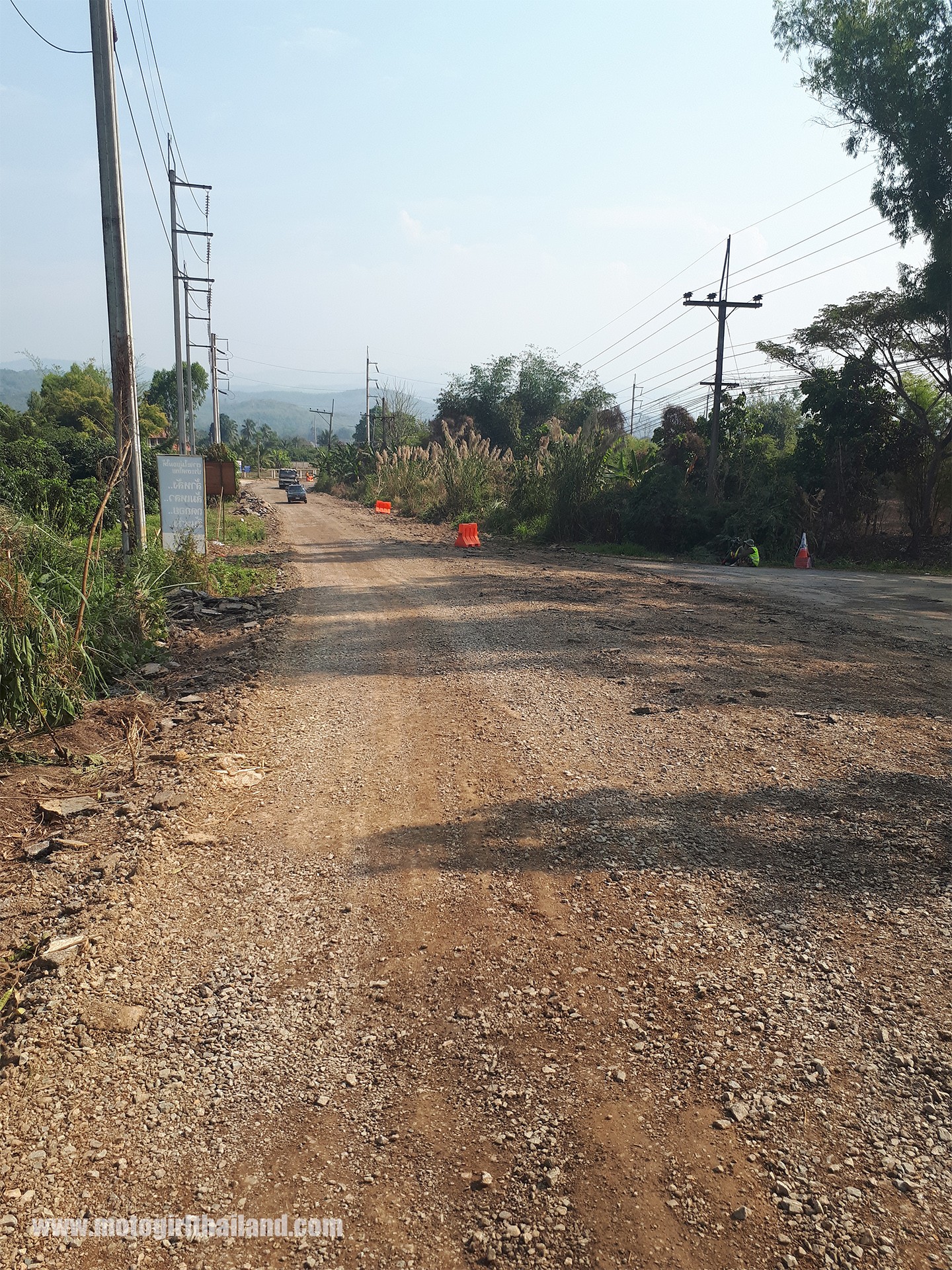 Seeing as the heat was so strong the plan was to make a short stop at Mae Suai Dam for a cool down. 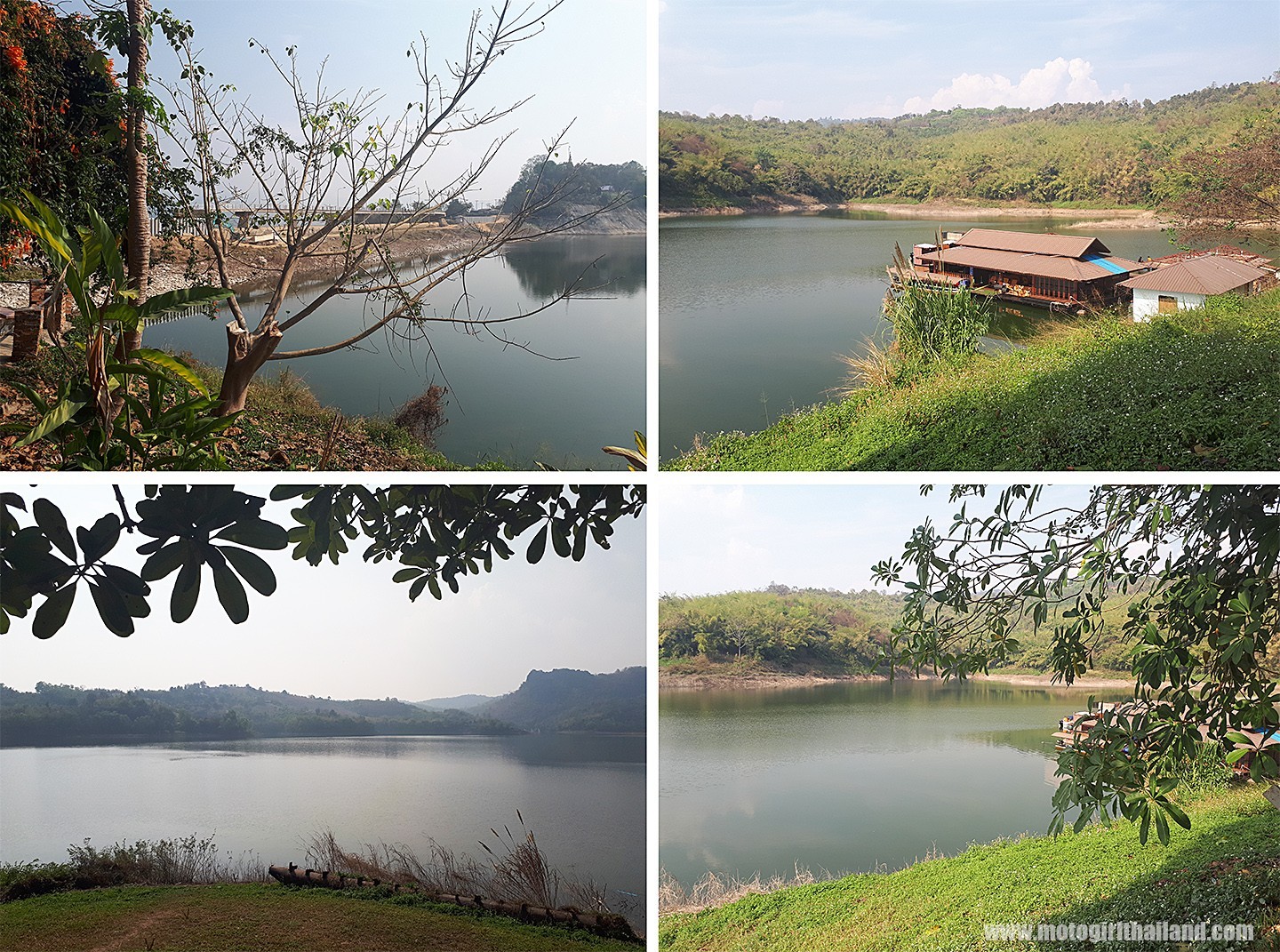 A cool drink and a quick soak in cool water got the core body temperature down. A few locals were enjoying the refreshing cool water too. (Was shockingly cold at first, haha!) The current was pretty strong too, so had to be careful about where to stand and where to sit. 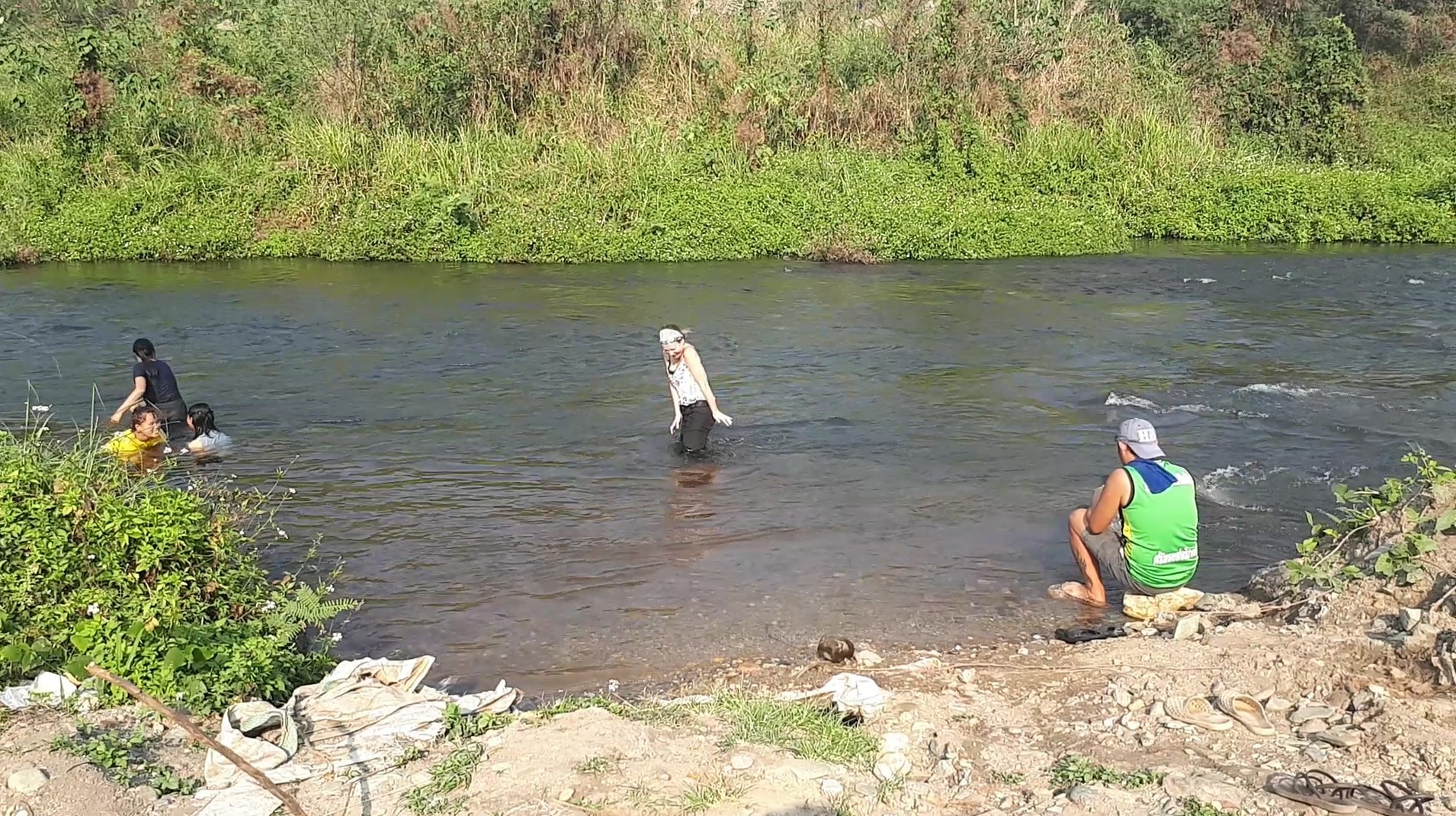 After roughly an hour of relaxing I was feeling fresh enough to head for the boring and busy main R118..and the horrible road-works there, which seem to taking for ever (years in fact!).

As I was nearing Chiang Mai city I considered stopping at the airplane boneyard around Doi Saket area. It looks interesting and although the light was perfect I decided to just head home. A fun one to stop in for a photo op for sure though. So will do it another day and write up about it then. 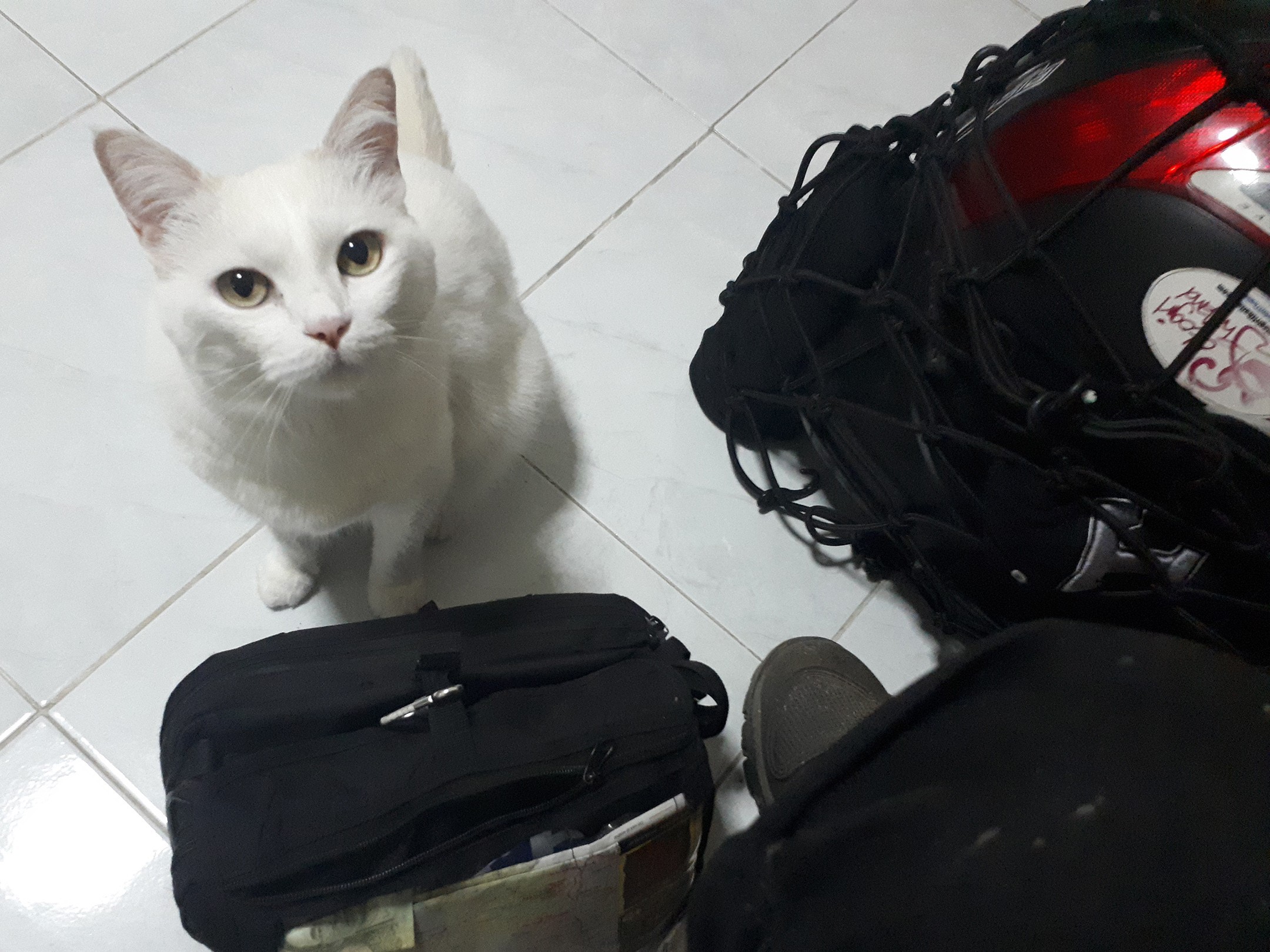 The pot of gold at the end of the rainbow

Finally home I got to enjoy a nice welcome home from Miss furry pants Nangfa the cat. She is an absolute joy and felt good to be back to her. 🙂

Hope you enjoyed the trip report.
If you did, comment and let me know 😀