Safety first. Is there any such thing in Thailand?

Whether a visitor or resident, chances are you will have noticed the rather -ahem- ‘lenient’ safety procedures in The Land of Smiles. From building site construction to wearing a helmet whilst driving, ‘safety first’ is generally a loose concept. 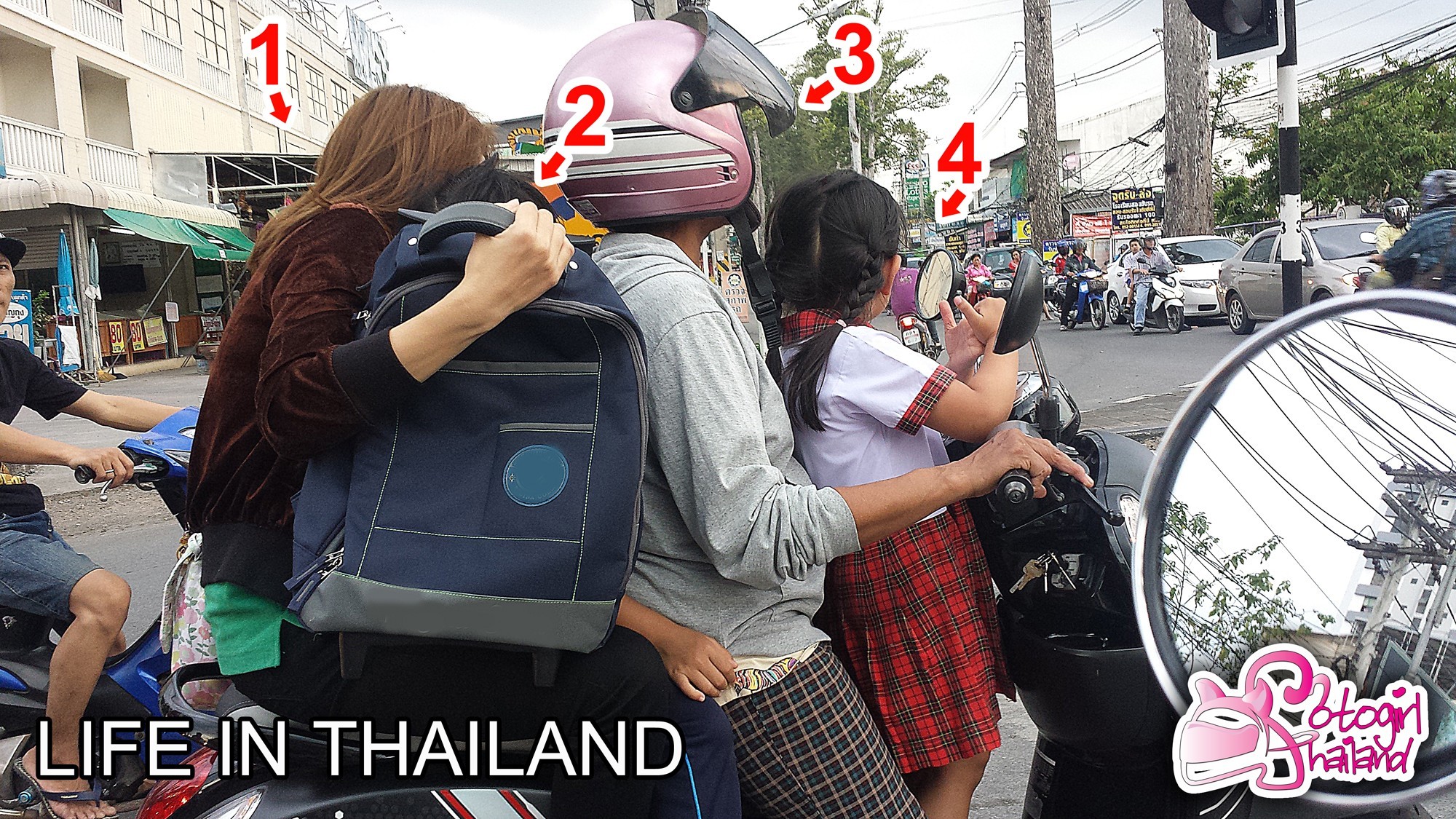 Lets look at the moto

There is some truth to it though, because some of the helmets that are used offer as much protection as a plastic bucket. Seeing as they cost the same as a plastic waste basket, I’m not really surprised. >.<

The problem too is that this care-free attitude rubs off, and many think there is little risk in being unprotected, that is until an accident happens. Even slow speed accidents can cause serious damage. Problem also is that the weather is often very hot and small scooters are a common mode of transport, making it easy not to gear up. It’s just too hot and the commutes are just too frequent.

I confess that although i wear a helmet when on my scooter, I do not protect the rest of my body. I do try never to take my scooter out onto any main roads though, and use it for slow and short commutes. Although they do say “accidents happen closest to home”… 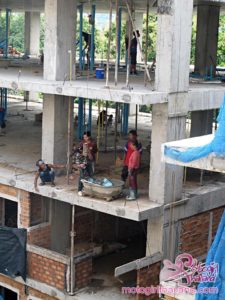 Watched these guys toil away, whole families working together. Baby in the background.

Oh, and as for Zebra Crossings, traffic signs and indicators etc, do not ever expect them to operate as they should. These are usually taken as suggestions by drivers here. Be VERY wary of stepping onto a Zebra Crossing, because drivers will likely NOT slow down.

As for building construction sites, I cringe when I see anyone working on them. Many of these construction workers are Burmese and so are paid very little, with little to nothing in the way of safety gear offered to them. They are disposable, sadly, because they often do not have the correct ID or are classed as second class citizens. These workers are often both sexes and entire families work on the sites, babies left on little mats as mum and dad toil away. These workers work without safety helmets, work in flipflops or barefoot, use bamboo poles for scaffolding and ascend great heights either freehand or with simple ropes. It gives me the shivers!
Very agile though and it is like watching a circus act or a trapeze show.

I also regularly see welders using guns without safety glasses, sparks flying everywhere. I even once watched a group of tourists happily stand around chit-chatting in front of a local man who was welding a metal fence. Sparks were going off like firecrackers and yet they stood there lost in conversation..haha. Oh well..nothing happened, but still, I would exercise caution personally. 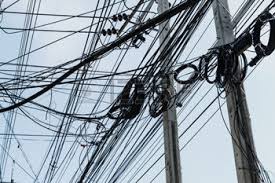 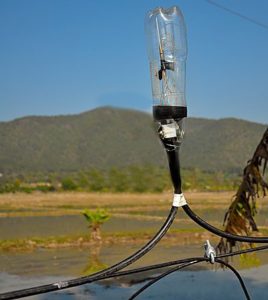 When out and about you may have spied plastic bottles being used on the spaghetti junction wires to try waterproof spliced wiring. The wiring is threaded through a bottle and the splicing is wrapped with good old black electrical tape. Ho-ho.

Black electrical spaghetti wires are a common feature in Thailand, and often break and hang down to the ground. Typically, when this happens, the wires are wrapped in plastic bags until proper repairs can be done. All you can do is hope the wire isn’t touching the ground, that it isn’t electrical and the area isn’t flooded…. Might seem far fetched, but it has happened and yes, people have died. 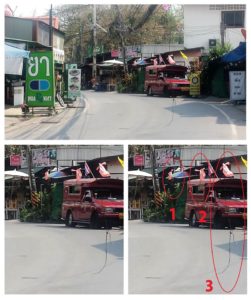 These broken wires near my home one day. Later they were tied up with bags at the bottom…

I often wonder when I stay overnight on my travels about the wiring, especially in the shower area. Mainly concerned if the wiring has been properly earthed or not! Surprisingly this issue has even happened in big resorts and hotels. I recall one sad news report about a father being electrocuted in a resort pool, because the pool lighting had not been properly earthed. Tragic..

Simply walking too, poses bizarre risks. You have to have eyes everywhere. Whilst looking at the ground to make sure you don’t step on some random piece of metal which is sticking up from the ground, or tripping over the cracked pathing, chances are you will run smack bang into a low piece of signage. Thai height is not the same as foreigner height, so the signage isn’t set at a level with taller folks in mind. 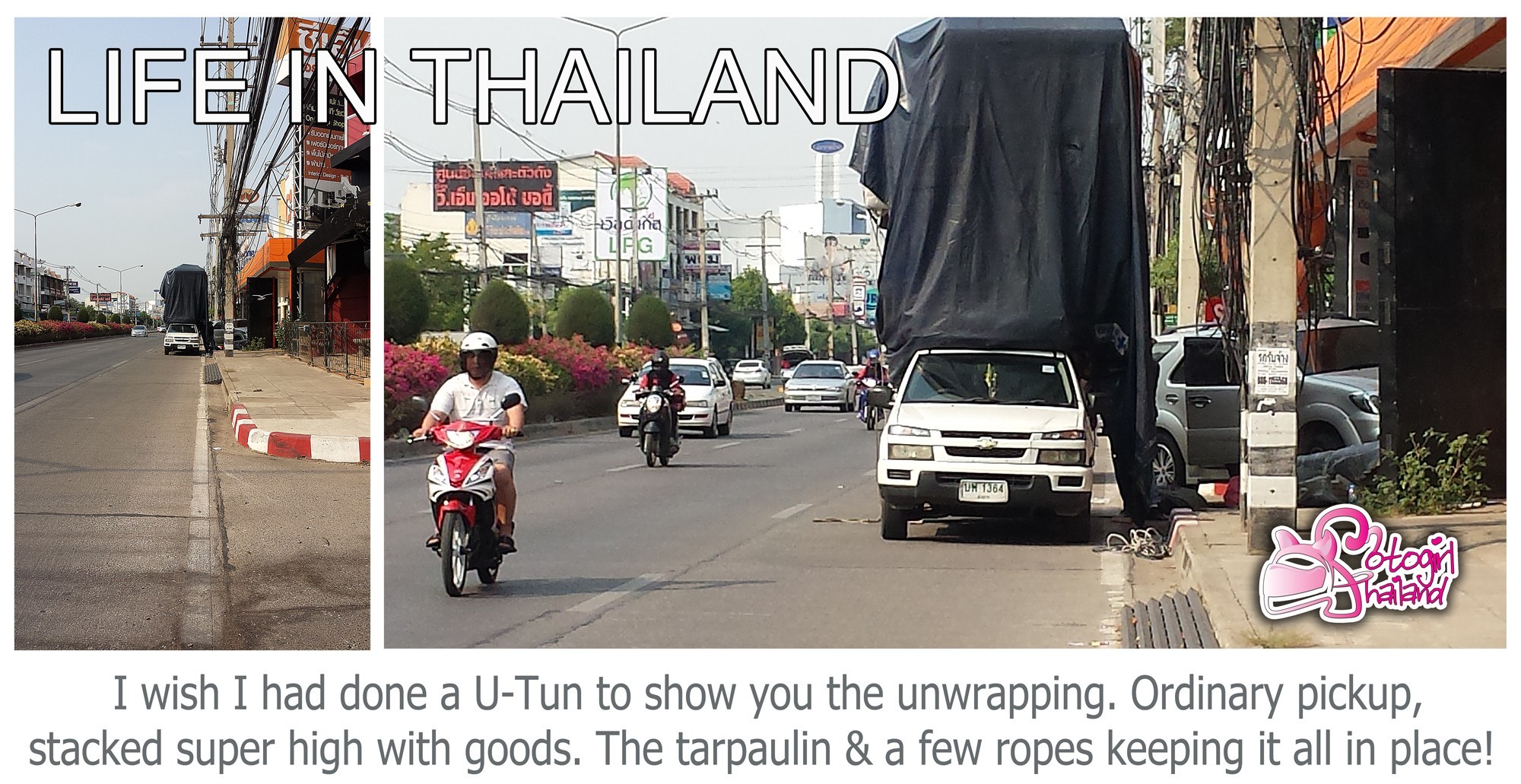 I had just this experience at the worse possible time once. I was recovering from a deviated septum surgical procedure. I decided it was time to get out and do some walking. It was early evening and getting dark. My nose area was fragile and sore. I tentatively walked keeping an eye on the ground so as not to trip, when BAAM! i walked straight into a low level sign. Thankfully it hit my forehead rather than my delicate nose, but it sent a ringing searing pain through my body, so much so, I nearly blacked out! 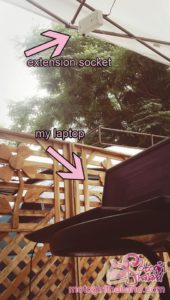 Starting to rain. Electric socket above me! 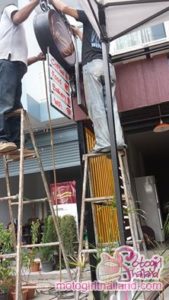 Welding starting outside of the coffee shop I’m sitting in Sparks-a-flying!

Walking isn’t exactly a national pastime in Thailand, and walking for walking’s sake or for pleasure is considered in general as really quite odd.

I’ve come to live with it and accept it as normal, but it is comical to witness the observations through fresh eyes from anyone who is experiencing it for the first time. 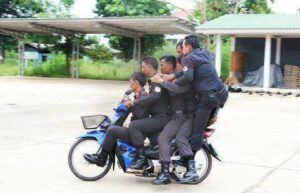