Projectile Vomit and the Importance of Hydrating… 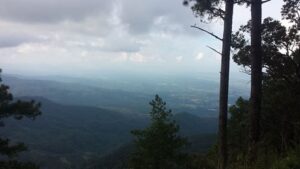 Early this afternoon when the sky was overcast, i went to exercise at a park just down from Doi Suthep mountain.

The sun began to emerge and seeing as i had already pretty much worn myself out, i decided that i may as well hop on the bike and head up the mountain.
The sun was out.
The air was clear.
The sky was blue and filled with big puffy clouds.
Just perfect!

A bit further along i see a guy on a KLX 250 riding leisurely. Overtook him.
But like sticky rice, he was right on my back the whole way. At the 2nd lookout i pulled over, as did he.
Ironically it turned out that the guy was someone i had been meaning to meet up with for around a year or so.

We got to chatting for a while, but in the full sun.
Suddenly I became very aware that i was getting seriously faint. I told myself to snap out of it, but myself didn’t listen. (Remember that i had already worn myself out earlier from the workout (and although i drank water, it was probably not enough)). I had planned to eat lunch after working out but didn’t (as i instead went up the mountain), so that probably didn’t help either. So it must have been a combination of lack of food and water, and a touch of heatstroke. But really brought on by a lack of hydration (ALWAYS keep yourself hydrated!) This bad combination not only made me nearly fall off my roadside perch by fainting…it also..(thank you Murphy’s Law)..made me (in front of several tourists)..PROJECTILE VOMIT over the side of the view.No ordinary graceful vomit either (if vomiting could ever be graceful really…)..but PROJECTILE. Oh happy days. @.@ (Picture “The Excorcist” ..)….Once recovered, i attempted to redeem myself and my embarrassment. All i could think of to say was “the only way this could get worse, is if i sh*t myself”.(Classy, right..)
..and NO, thankfully i didnt (sh*t myself)..! But bloody hell after i said it i thought, ‘Murphy’ (Law) is a mean bugger and he may just add insult to injury!

..anyway, it turned out good in the end.
Decided to throw in the towel of my day and head further into the mountain.Thankfully it turned out to be something funny to look back on, rather than something solely cringe-worthy. But that’s often about the company too. So thank you to those who help me laugh at awkward situations.

..particularly as i have so many of them.

Do you have an embarrassing tale?
Share with me :p