How I Got Into Motorcycles…

As a young woman I had always liked the idea of a bike. My father had been a motorcycle rider up until his later years. He didn’t, however, like the idea of me riding one (nor a car for that matter..!).

I remember the first time i clasped my eyes on a classic Triumph ♥. I was spellbound by it. I was around 12 years old, something like that. It created a lifelong admiration of Triumph in particular.

Fast forward many many years later to sometime in 2009 in Thailand. After having lived in Thailand for roughly two and a half years, i became bored of my bicycle and frustrated at relying upon public transport for bigger trips (or, at the time, my ex, who owned a Hilux). I wanted more freedom. I had one stint of trying out riding a scooter in 2006 with a friend i had met on a course i did in Thailand, but within moments i had crashed into the wall (softly) and scraped my legs. This broke my confidence and i got him to return the bike right away. I decided not to try again. ..but by 2009 my feet were itchy to try again.
Additionally i should note that in the UK i had taken lessons for driving a car, but never took the test (i had a city life and always used public transport or a bicycle). So, i had never ridden a scooter or motorbike before.

In 2009 i hounded my ex to help me learn and eventually he relented. So, I rented a small automatic scooter 115cc (in those days no one ever checked about licenses…as bad as that is.. or maybe my ex rented in his name, i don’t recall anymore) and over time (with a few lessons from him and then left to my own practice) i became more and more confident. I remember well the first time i took the scooter out onto the streets of Chiang Mai by myself at a stupidly early hour (something like 5:30/6am), so that there would be little traffic around. My heart was beating so fast i thought i would faint. Funny now thinking back to it.

So.. i began riding a scooter around (unlicensed and carrying my provisional license), for the next few months. It felt fantastic.(I do not advocate driving without a license btw…this was just my experience) 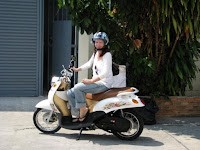 purchased my own scooter. A beautiful brand new gleaming Yahama Fino 115cc, that looked retro. I was in love. I also finally got myself licensed. 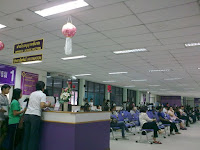 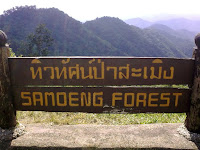 I had been riding it everywhere around the city and up and down the mountain for about six months, and (as arrogant as this sounds), i was a natural. My ex and I had broken up and I made a friend (who eventually became more than a friend) who had been riding motorcycles for years and owned a small manual bike. Over time and through riding slightly further afield in areas such as the Samoeng Loop, we eventually decided it would be a great idea to set off on an adventure and head out of Chiang Mai on our bikes. You can read about this trip here
This trip was the beginning of a true love and desire of exploring more on two wheels. I had gotten the bug…and it was onwards (but not always upwards) from there.!

So, how did you get into bikes? Would love to know. Leave me a comment below! 😀